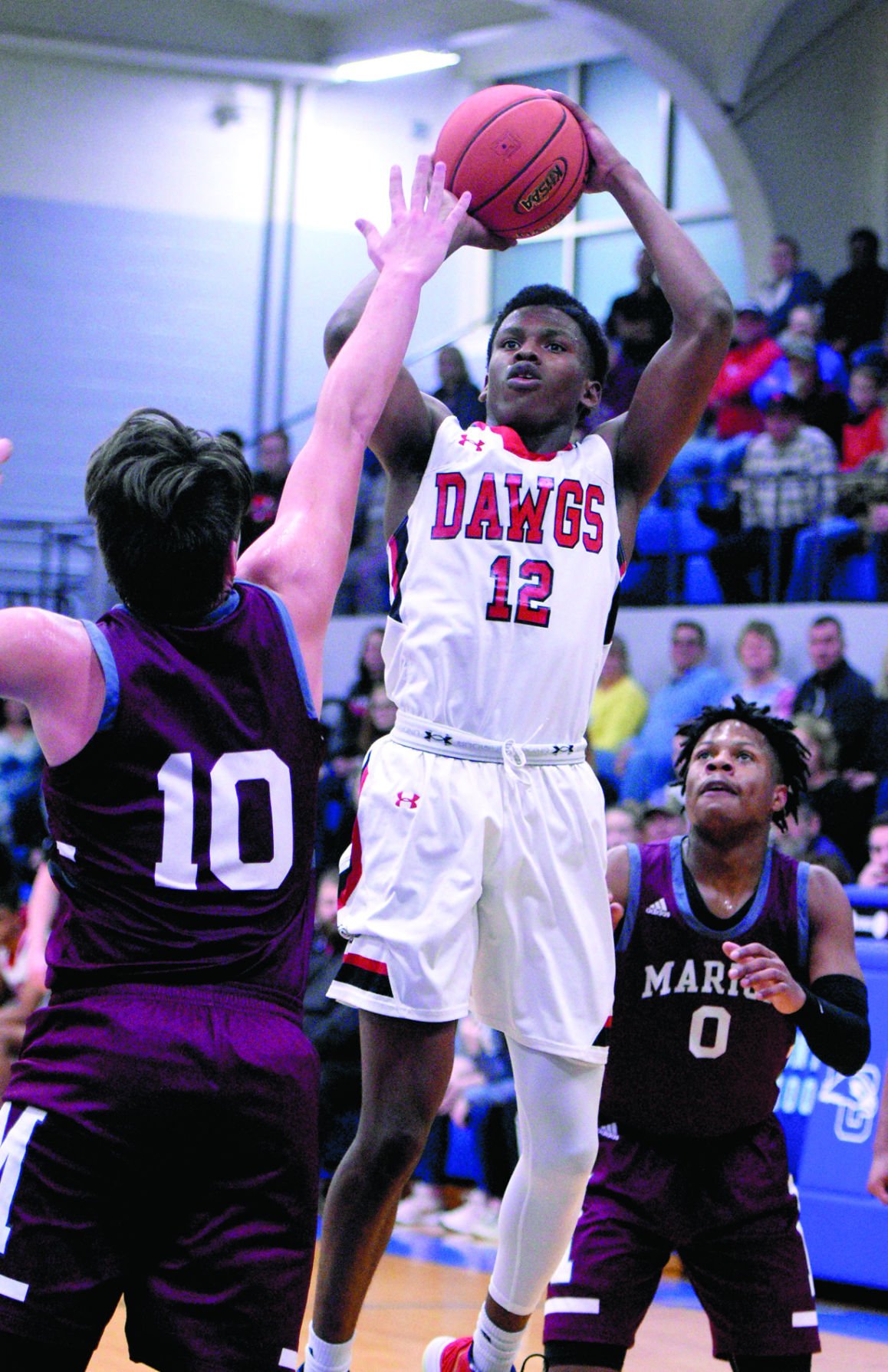 John Hardin’s Trevon Harris goes up for a shot over Marion County’s Mason Sullivan while teammate Tyshay Epps looks on during Saturday’s Class 2-A, Section 3 title game at LaRue County. 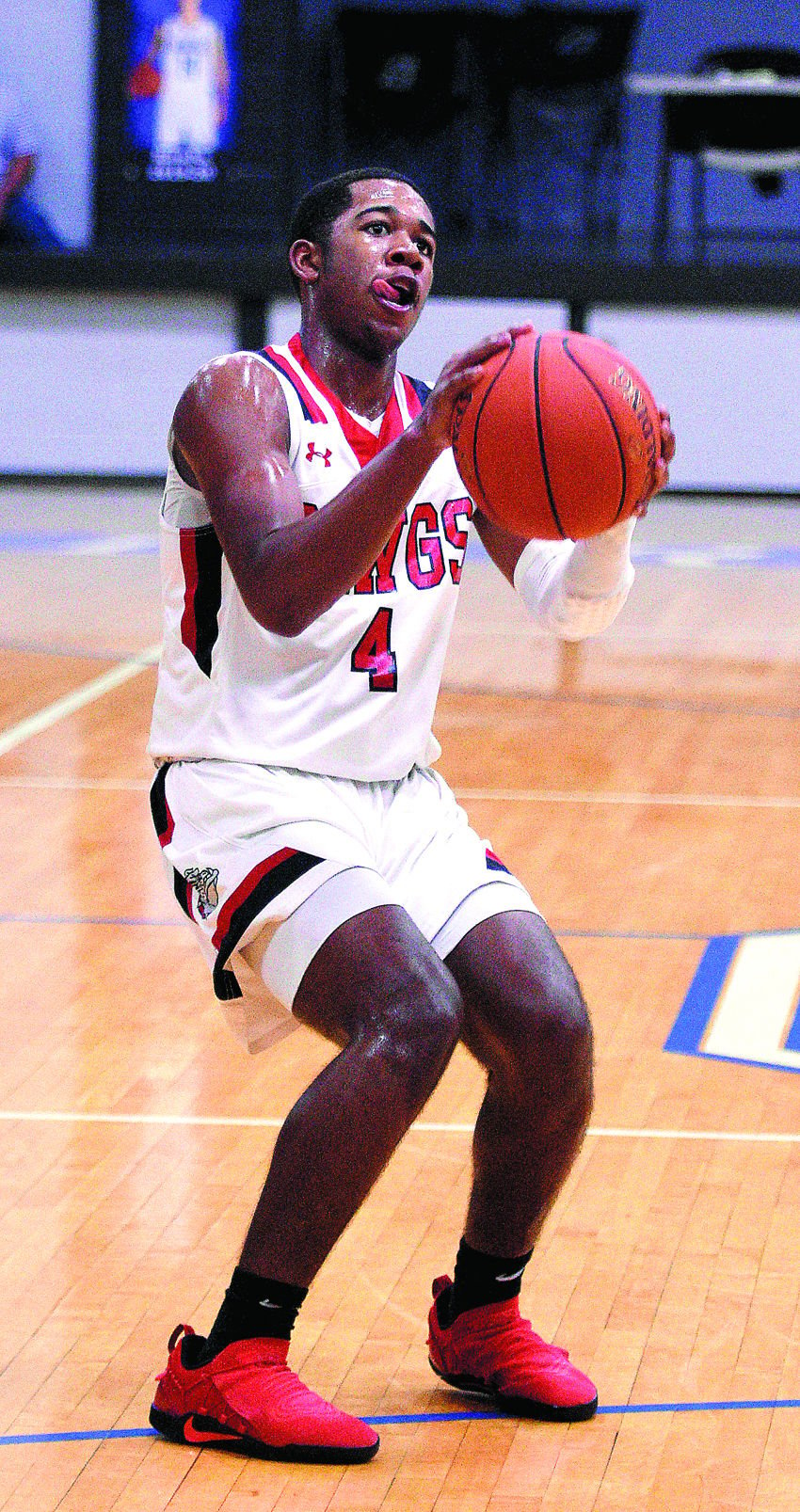 John Hardin’s Devon Rogers pulls up for a jumper during Saturday’s win over Marion County at LaRue County.

John Hardin’s Trevon Harris goes up for a shot over Marion County’s Mason Sullivan while teammate Tyshay Epps looks on during Saturday’s Class 2-A, Section 3 title game at LaRue County.

John Hardin’s Devon Rogers pulls up for a jumper during Saturday’s win over Marion County at LaRue County.

It was starting to get dicey in the final minute of Saturday’s Class 2A Section 3 Tournament final. Over the last few minutes of play, John Hardin watched its nine-point lead on Marion County evaporate to 53-51.

With less than 45 seconds on the clock, Devon Rogers went back to the free throw line with a chance to slow the Knights’ onslaught. He had just hit two earlier and the pressure was on, but Rogers drained them both.

“Easy. I practice them every day,” Rogers said. “After practice, before practice. It was just a routine.”

Marion County didn’t drain another basket, while Rogers and Te Stone each hit another bucket from the line to seal a hard-fought 57-51 win to claim the sectional.

“I thought we grew up tonight,” Bulldog coach Jared McCurry said. “Played in a close game and had a good lead there at the end and had some trouble with some turnovers and some inexeperienced plays, but you’ve gotta go through those to get tougher as a team.”

This was the only the second game of the season where John Hardin had not won by double digits. It was also the second-straight game where the team put up its fewest points in a game all season.

The night before, the Bulldogs were held to 58 points in a 58-47 sectional victory over LaRue County, which was the fewest points the team had been allowed to score up to that point.

Marion County, a team coached by former Bulldog star player Maze Stallworth, came into Saturday night on a four-game win streak. In order to slow them down, McCurry estimated that his team played the most zone it had played in at least five years.

McCurry added these tougher, more competitive games were important for the team in order to grow and handle adversity.

“I tell them we can’t beat everybody by 30, 40. You’ve gotta be able to win games like this,” McCurry said. “We fought through it, had to play a little slower-paced game. We just had to adjust to the way the game’s being called and I thought they did a good job.”

The Bulldogs openeed the game with a 9-2 lead off baskets from Trevon Harris and Alex Matthews. Marion County proceeded to climb back, before three straight baskets put the Knights in front 15-14. This would not last long, as J.R. Montgomery and Rogers each drained a bucket to put John Hardin back in front.

The Bulldogs’ 18-17 lead at the start of the second quarter was gone in seconds with a Knight three-pointer. With Marion County up 26-22, an offensive foul on the Knights gave the ball back to John Hardin with 4:43 left in the half.

Matthews proceeded to five straight on a pair of shots, with a foul on one of his baskets setting up the and one. John Hardin did not let Marion County retake the lead for the rest of the first half to lead 31-29 at the break.

The majority of the third quarter went the Bulldogs’ way, as the team outscored the Knights 14-9 from start to finish. This was the only instance throughout the game where a team failed to break into double-digit scoring across a quarter.

Up 45-38 at the start of the fourth, it was no easy finish for John Hardin. Marion County hit a trio of buckets before Rogers hit his first pair of free throws to make it a 53-48 game. A trey for the Knights set up the 53-51 situation for Rogers at the line and it was too little too late for the Knights.

In addition to Rogers’ five free throw points and Stone’s solo shot from the line, Harris, Matthews and Preston Murrell all hit one shot each to finish the final quarter with 12 points as a team.

“It helps us a lot,” Rogers said. “So when we’re back in those situations we know how to react to situations and come out with a win.”

Matthews led the way for the team with 22 points. Harris followed at 15. Murrell drained eight, just ahead of Rogers at seven. Montgomery and Jalen Tyus each hit a single shot for two points. Stone finished the night with his solo free throw for one point.

John Hardin (16-0) travels to Central Hardin on Tuesday where it will tip off against the Bruins at 7:30 p.m.