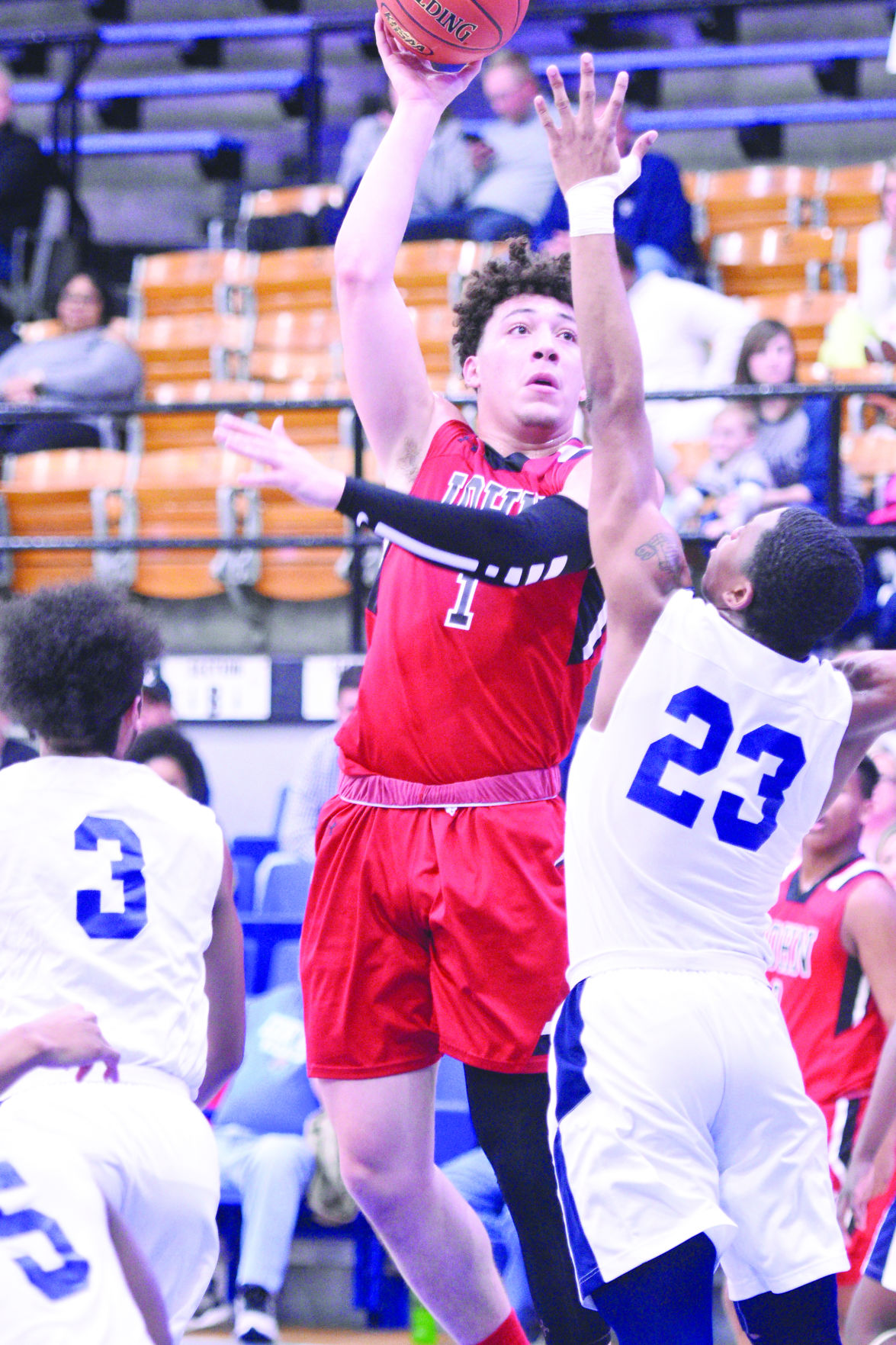 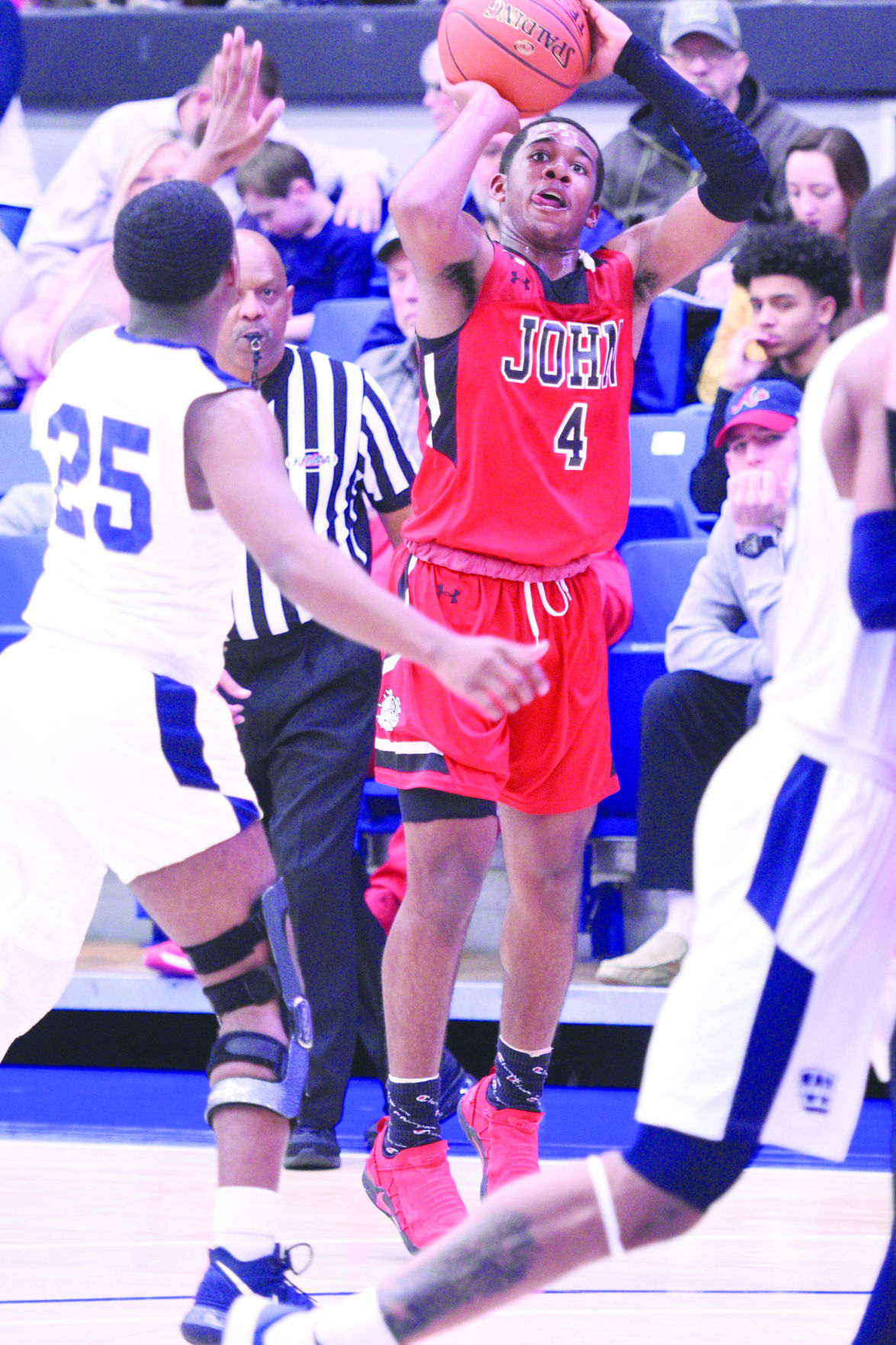 Devon Rogers looks to get off a three-pointer in the second quarter on Saturday, with the Dragons’ Kobe Brents guarding. Rogers helped set the Bulldogs’ offensive pace in the first half.

Devon Rogers looks to get off a three-pointer in the second quarter on Saturday, with the Dragons’ Kobe Brents guarding. Rogers helped set the Bulldogs’ offensive pace in the first half.

OWENSBORO — It was, literally, one for the books Saturday afternoon.

Taking on Warren Central in the Kentucky Class 2-A Tournament semifinal, the No. 1-ranked John Hardin boys’ basketball team set both team and individual records in an 85-47 win over the Dragons inside the Sportscenter.

The Bulldogs’ 85 points was the most put up by a team in a tournament game.

“The guys did a great job. I could see it in the warm-ups, the layup line, we were talking, we were moving better,” John Hardin coach Jared McCurry said. “Guys were playing for each other and we came out and I think we saw the real John Hardin tonight. Hopefully we can do it again.”

That would be at 4 p.m. today when the Bulldogs meet No. 11 Bourbon County, a 71-66 winner over No. 3 Lexington Catholic, for the championship.

On the individual side, Alex Matthews rebounded from a slower game Thursday against Christian Academy-Louisville.

“My shots weren’t falling as much last game, so I really just wanted to come out, even if my shots weren’t there,” Matthews said. “I wanted to just bring intensity to my team and play defense, rebound and do everything, but my shots just started falling at the beginning of the game, so I just rolled with it.”

Twenty-one of Matthews’ points came in the first half.

Leading 24-16 after the first quarter, the Bulldogs’ offense took off for another 20 before halftime.

The team’s depth was on display as nine of 12 players notched at least a single point.

In addition to Matthews’ offensive effort, Devon Rogers had a stellar first half. By the break, the sophomore had put up 15 points and three assists to help set the quick pace for the Bulldogs’ offense.

“I thought Devon came out and played tough. It was tough today, he’s a young player, a sophomore, played a lot for us last year as a freshman on that team,” McCurry said. “He’s kind of young, he gets down on himself, but he played tough and set the tone along with Alex,”

In the second half, Preston Murrell and Trevon Harris continued to help grow the gap. Through the third and fourth quarters, the duo added 10 points and 12 points to their totals, respectively. They also added seven rebounds each.

“Those guys were really athletic, so it was just more on focusing on using my body and trying to get into them and then watching where the ball would hit the rim and come off,” Murrell said. “I’d just have to time it, because those guys are really athletic.”