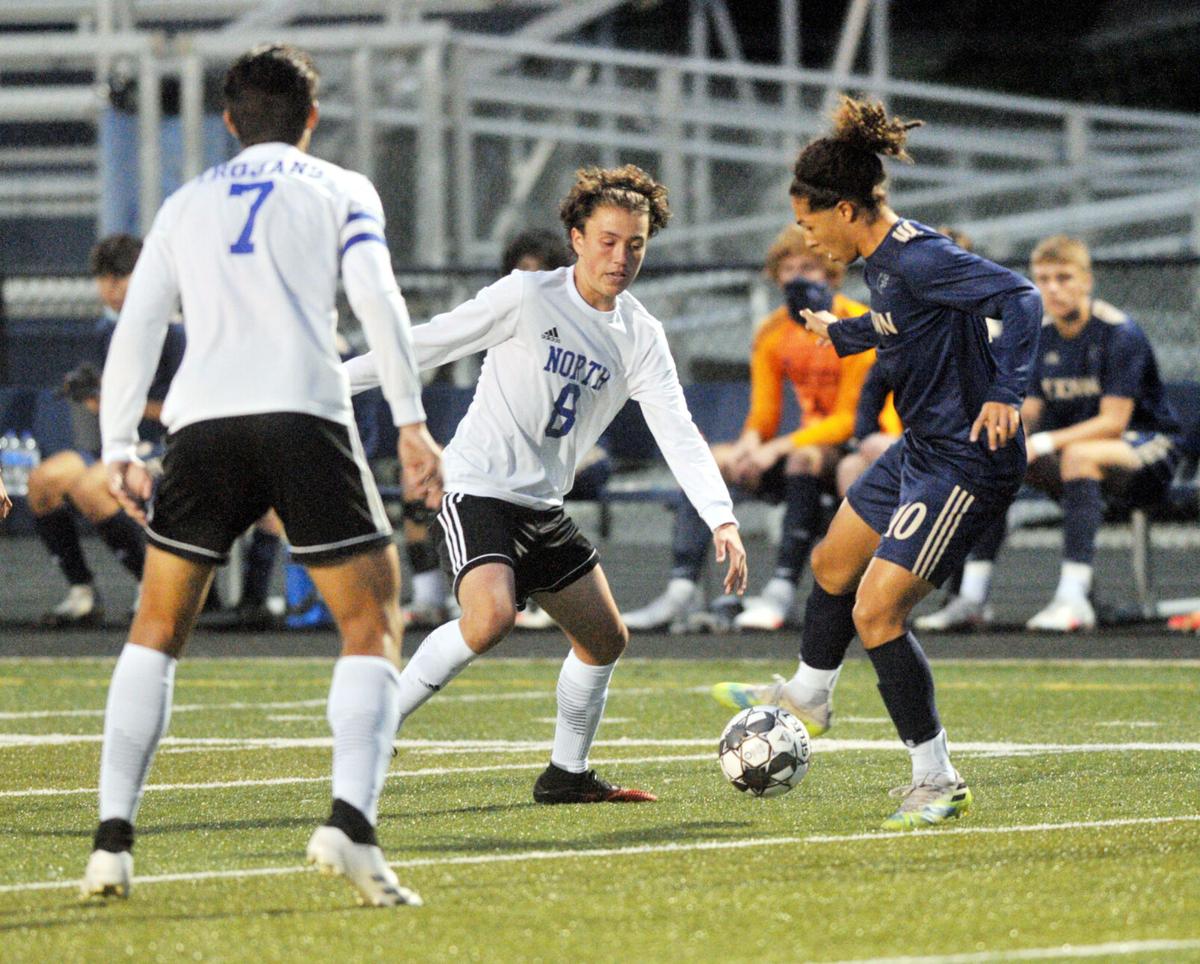 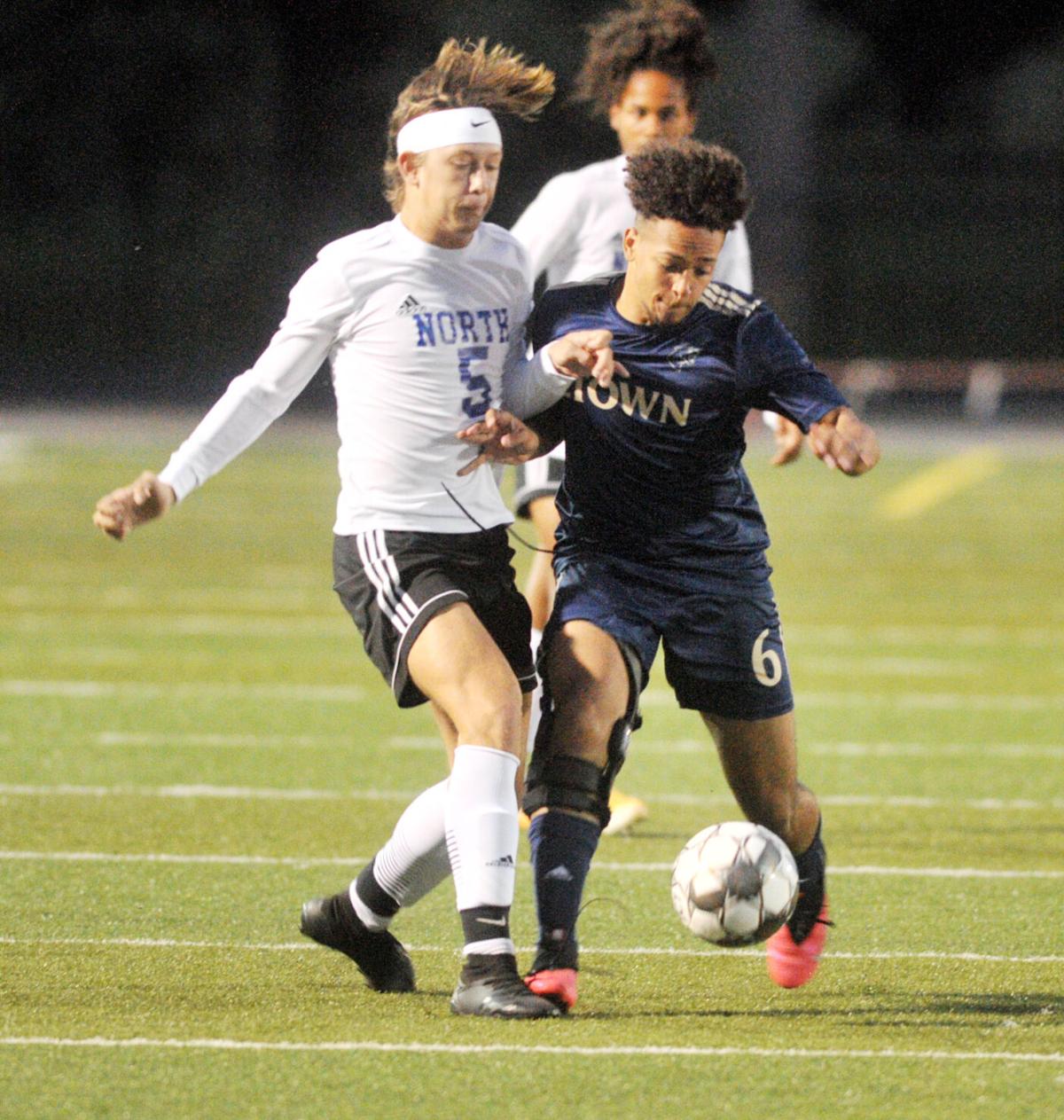 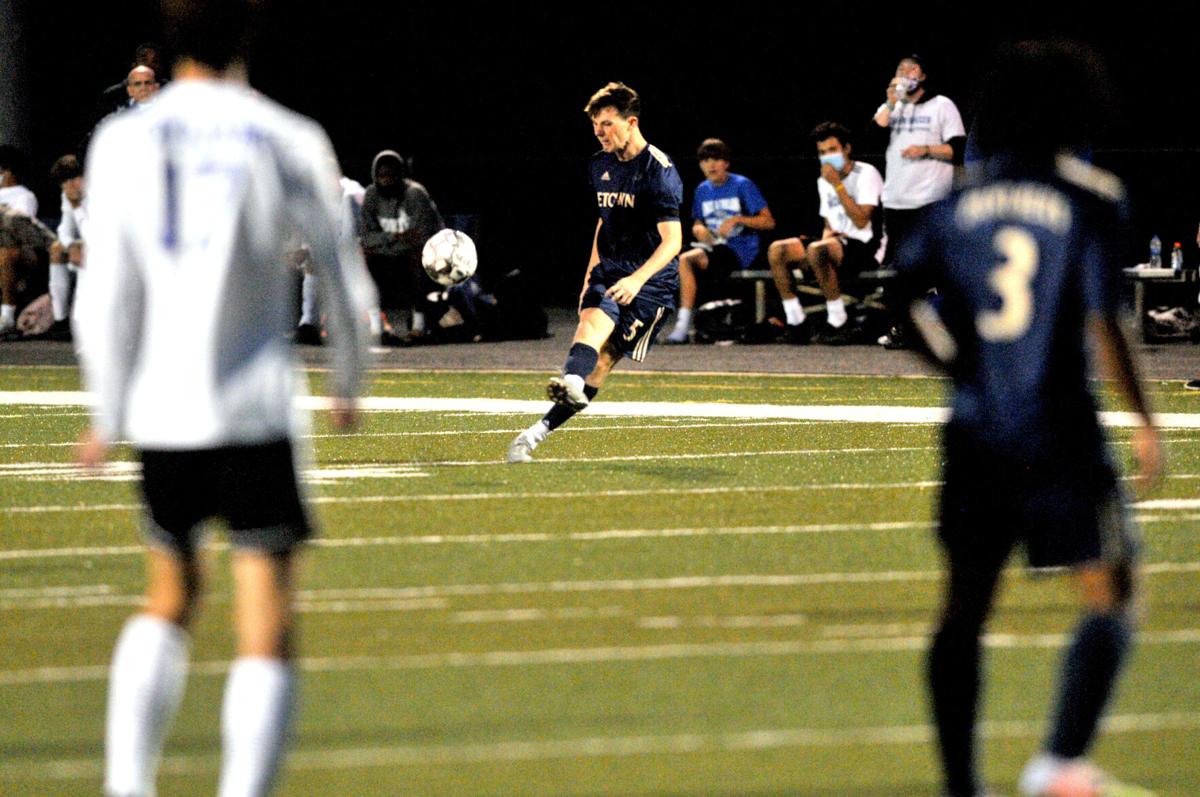 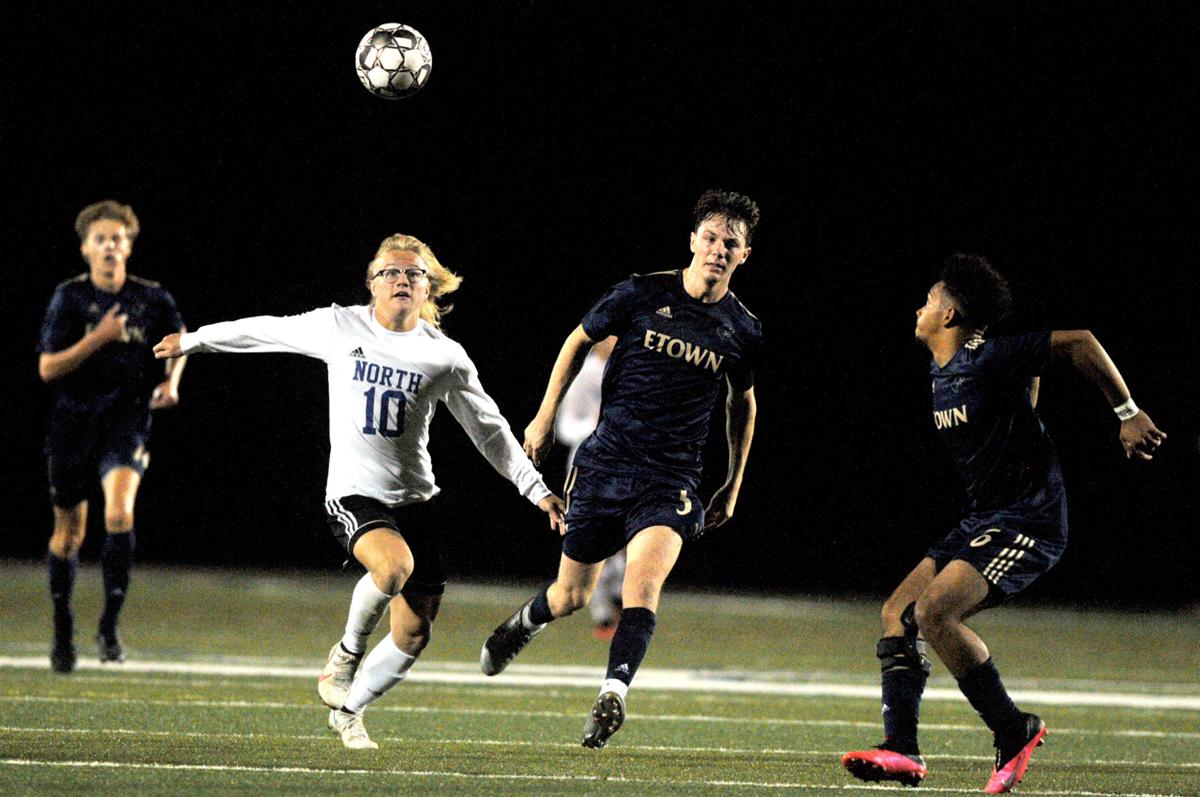 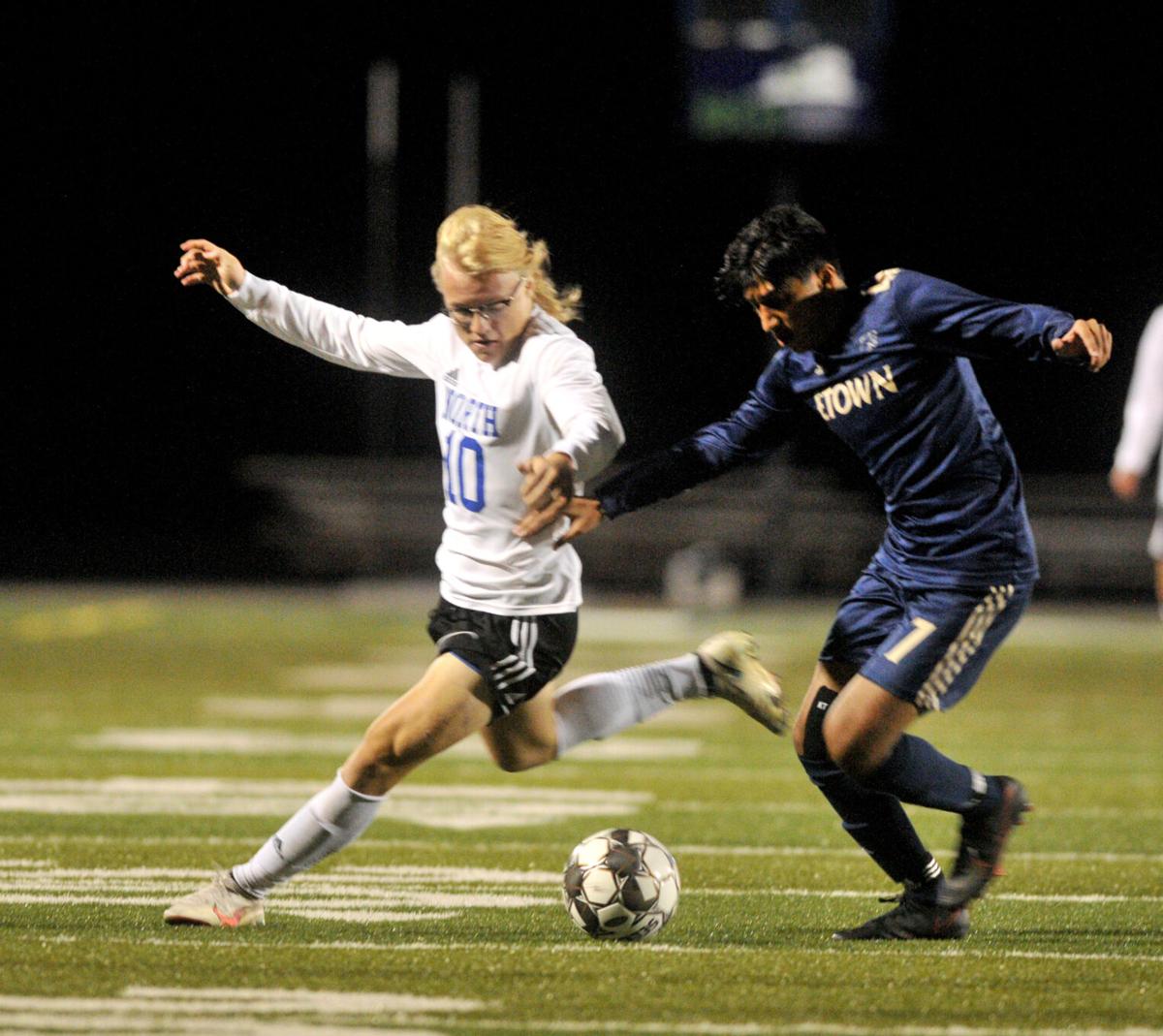 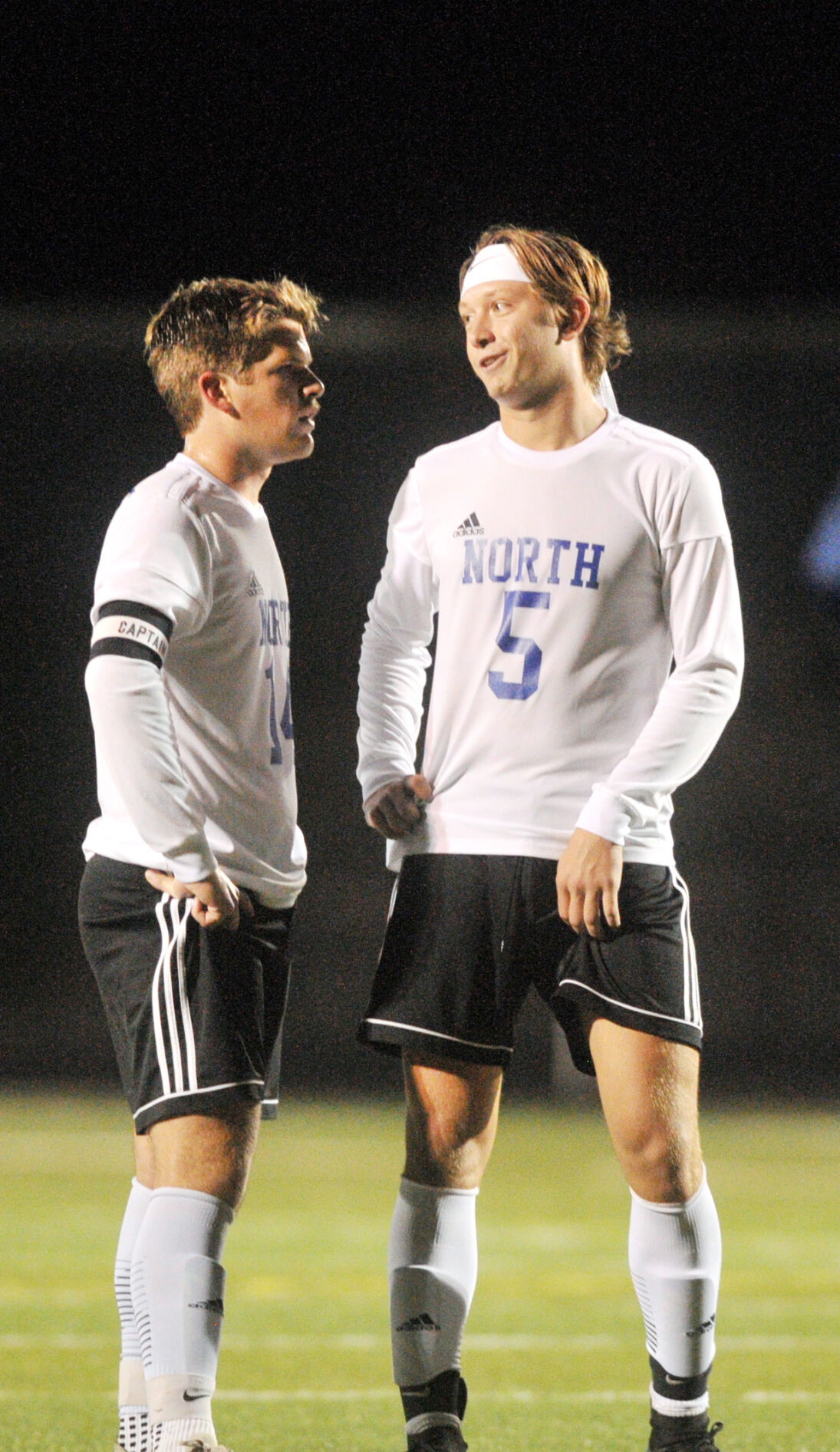 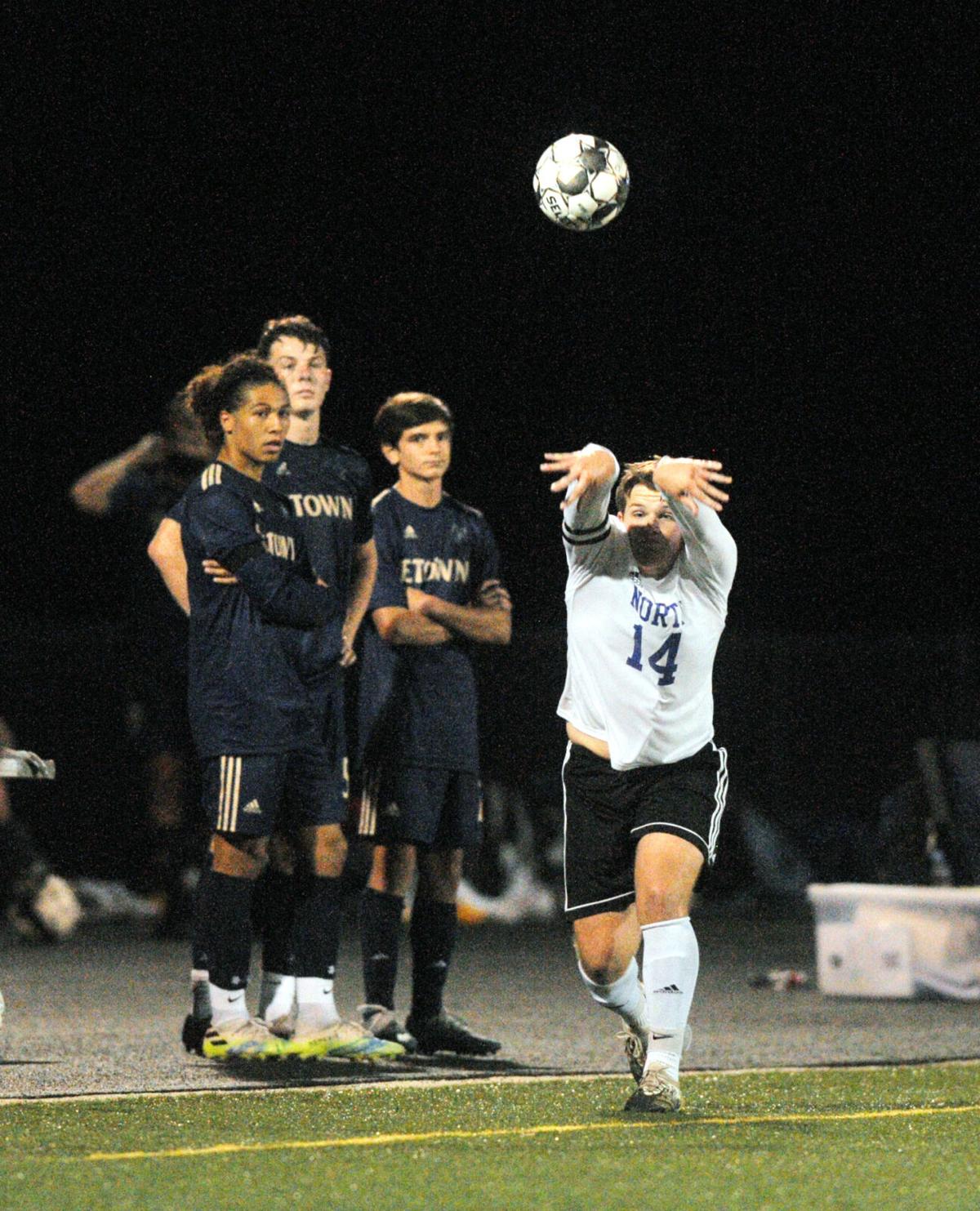 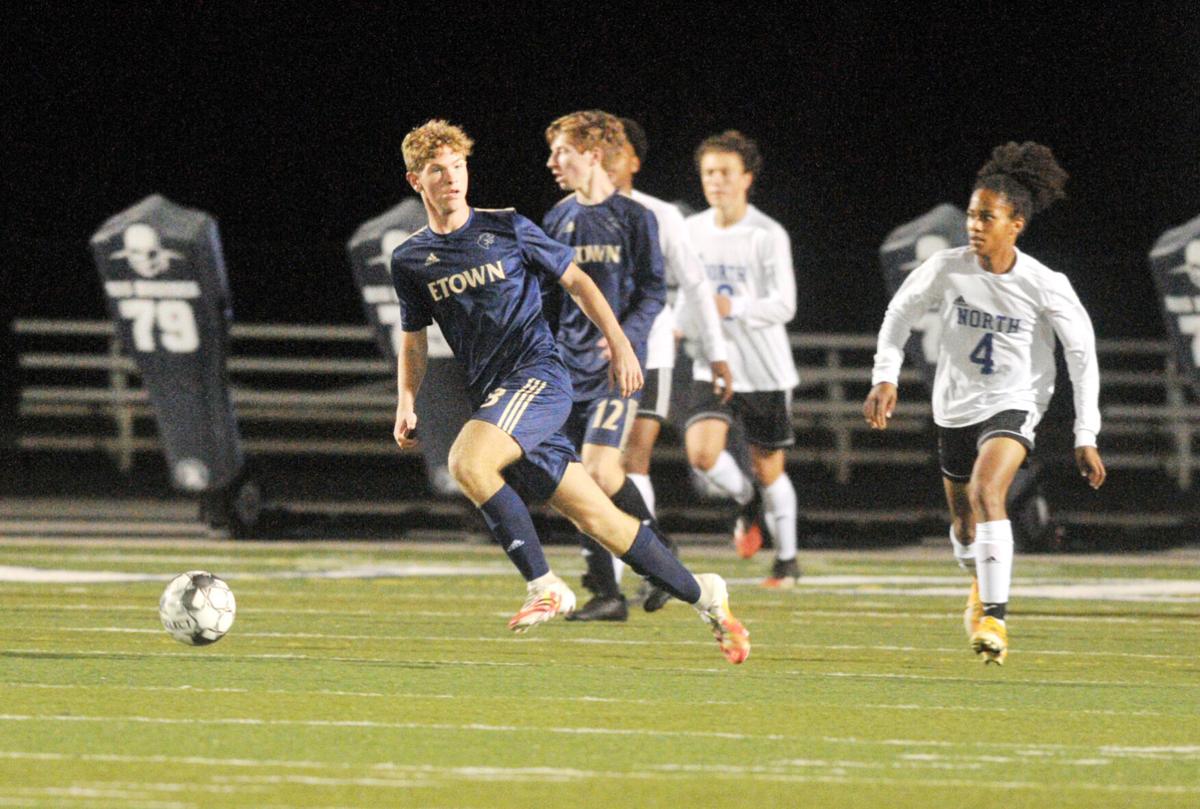 Sometimes you need a little luck and the Elizabethtown boys’ soccer team got it from North Hardin Thursday evening.

An own goal off a header from a long throw in tied the game at 1 with 6:01 left in regulation.

“We had a lid on the goal and then we own goal ourselves and give them a break,” Trojans head coach Jim Stone said.

The Panthers took that break and put it to good use when sophomore Cole Varela scored off a rebound from a Landin Grzelewski rifle with 24 seconds left in the first overtime for a 2-1 victory at the Elizabethtown Athletic Complex.

“We just put our guard down for a little bit, coming in here thinking we were the bigger ones, getting our minds straight ready for the postseason,” Grzelewski said. “We still have two weeks to do that.

“When that first goal went in we had a lot of pressure on us. We had to get one back to get back in the game. After that own goal happened our minds were set straight. Going into overtime we were very confident that we were going to put it away and come out on top.

“We realized at halftime this was a game. We needed to step our game up and go to another level.”

North Hardin took a 1-0 lead when sophomore Cayden Logsdon converted a penalty kick with 19:30 left in the game.

“I like what the team did tonight,” Stone said. “They may have out-possessed us a little bit, but I thought we were equal to the task most of the game. We played well. Our defense was really stout tonight. We gave up a lot of corner kicks, but we defended well. I’m excited with this.”

“He played his butt off, made some really great saves,” Stone said.

“I will give amazing credit and unbelievable praise to their goalkeeper,” Panthers head coach Corey Yates said. “He was phenomenal tonight. I almost felt like cheering him on toward the end of the game. How many more great saves can you make? We were talking as coaches, I can’t remember a keeper playing like this here in the years that we’ve coached. A lot of credit to him.”

While Keen kept Elizabethtown out of the goal until the game winner, the Panthers also hit the crossbar three times.

“To get that at the end is exciting,” Yates said of the win. “But it doesn’t take away from the fact that in nearly every facet of the game we were deficient in tonight. Our boys found a way, which is what you want to see as a coach. It was a good district game.”

The Trojans (2-4-1) take on Taylor County at 1 p.m. Saturday at the Elizabethtown Sports Park in the Bruin Classic.

“We’ve grown very quickly, very fast,” Stone said. “Our team is very dangerous. I like the direction we’re going. We’re putting it together. We’ve put a little wrinkle in our system and the boys are really accepting their roles. When we get Jabari (Rasheed) back into the mix of that, we’re gonna be a tough team. We’re gonna continue to get better. I like their attitudes. Their heads are up, even after a loss. I’m proud of them. They played well.”

The Panthers secured the No. 1 seed in the 17th District Tournament next month at North Hardin and will take on No. 4 John Hardin. No. 2 Central Hardin meets No. 3 North Hardin.

“I’m feeling very confident in this team, in this squad to go far this year, farther than we have been,” Grzelewski said.