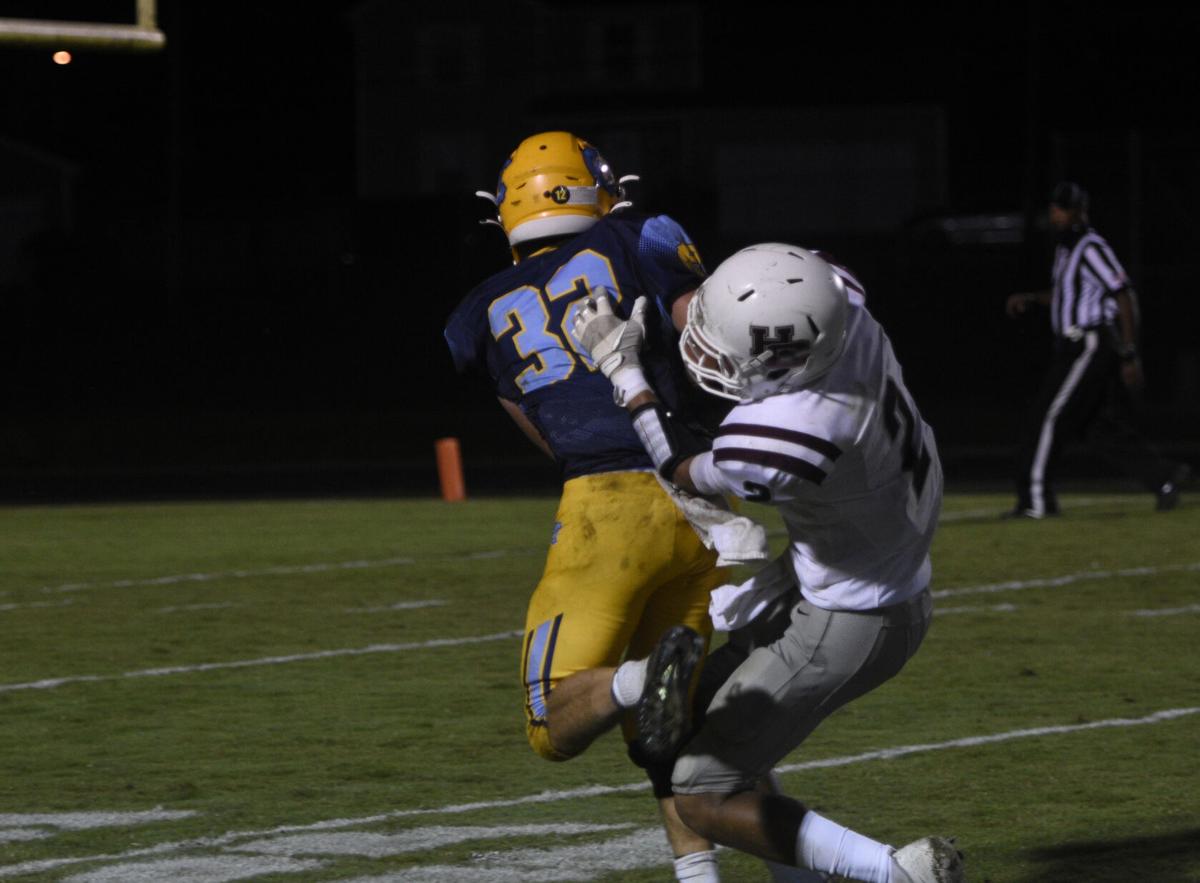 Central Hardin's Kaden Fergerson attempts to shake off Henderson County's Brayden Powell Coleman on a run in the fourth quarter of Friday's game. Fergerson rushed for 32 yards on the play, helping set up the Bruins' only touchdown of the night in a 34-6 loss. 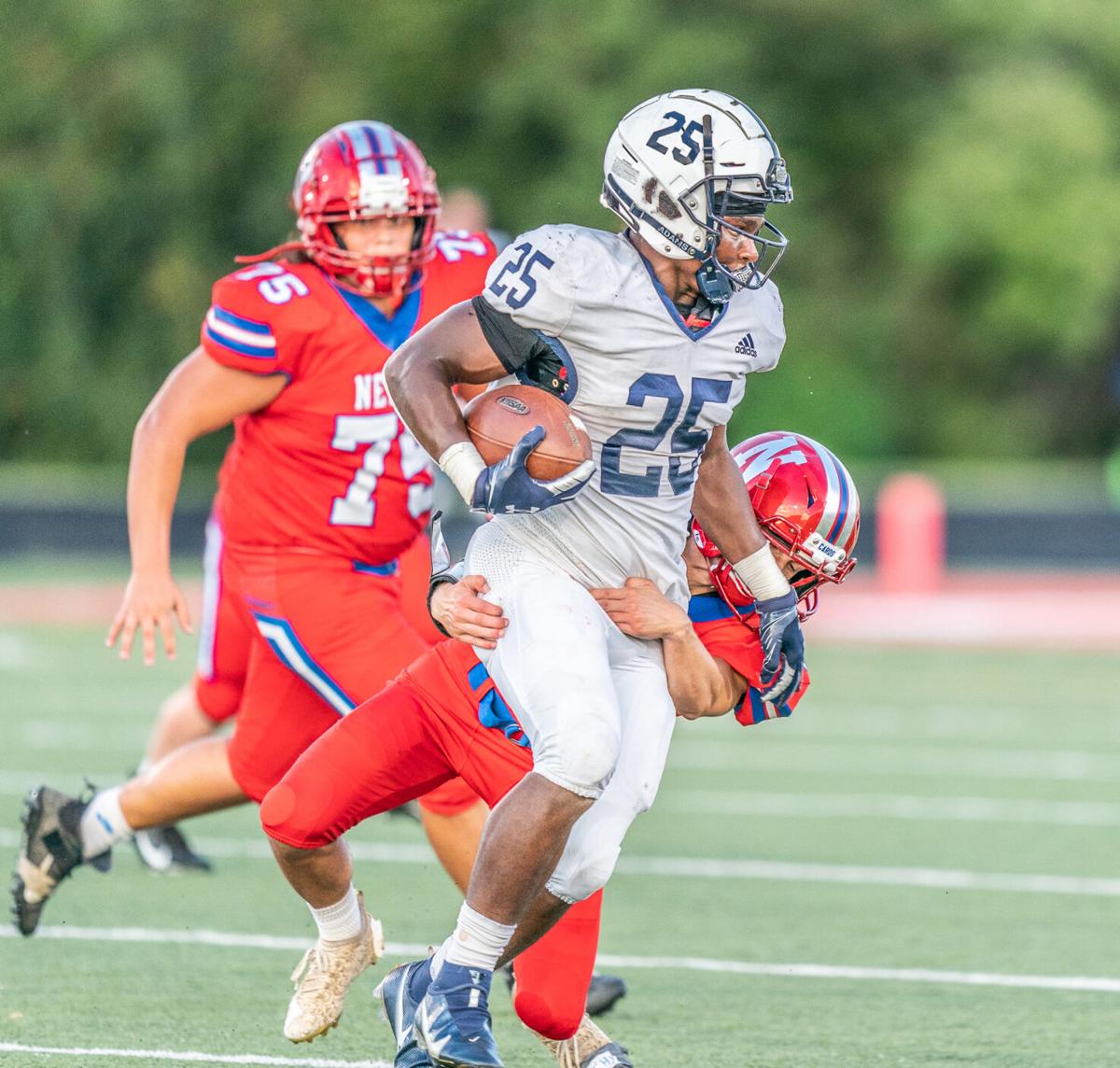 Central Hardin's Kaden Fergerson attempts to shake off Henderson County's Brayden Powell Coleman on a run in the fourth quarter of Friday's game. Fergerson rushed for 32 yards on the play, helping set up the Bruins' only touchdown of the night in a 34-6 loss.

Central Hardin's undefeated start to the season came to an end Friday night in Cecilia.

Hosting Henderson County, seventh-ranked Central Hardin fell behind early and was held out of the end zone until the fourth quarter in a 34-6 loss.

Scoreless after the first quarter, the Colonels got on the board when Kani Smith picked off Bruin quarterback Zakery Spurrier for a two-yard touchdown. The extra point made it a 7-0 Henderson County lead with 6:40 left in the first half.

Central Hardin found itself in a 14-0 hole with 11:06 remaining in the third quarter when Henderson County quarterback Seth Goben connected on an 18-yard touchdown pass to Brayden Powell.

The Colonels would score twice more before the third quarter came to a close. The next came on a 40-yard run by Jordan Wright with 8:38 left in the quarter. Smith followed with his second touchdown of the night and first on offense, running 10 yards into the end zone to make it a 28-0 game with 1:15 on the clock.

Trailing 28-0 to open the fourth quarter, Kaden Fergerson took off for a 32-yard run to set the Bruins up on the Henderson County seven-yard line. Two plays later, Spurrier lunged into the end zone on a two-yard quarterback keeper to put Central Hardin on the board and avoid the shutout. The ensuing 2-point conversion failed, keeping the Bruins at six points with 7:44 to play.

The Colonels answered on a 39-yard touchdown pass from Goben to Powell with 4:45 remaining.

The Bruins, who suffered multiple injuries, finished the night with five turnovers, including a fumbled punt return late in the fourth quarter that set up Goben’s final touchdown pass.

The Panthers amassed 593 total yards, including 392 on the ground.

Trey Durbin rushed for a career-high 167 yards on 11 carries and scored on a 50-yard touchdown run.

Quarterback Ryder Gregory completed 6-of-10 passes for 201 yards and two touchdowns. He also rushed for 79 yards and scored a touchdown.

Panther running back Nathan Nett provided a spark, scoring on the ground and through the air, and helping lead a defense that limited the Cardinals to 164 total yards.

After a scoreless first quarter, Elizabethtown took the lead and never looked back on a one-yard quarterback sneak by Gregory with 5:10 left in the second period.

With 17.6 seconds remaining in the half, Gregory threw a nine-yard scoring pass to running back Greg Hall.

The Panthers opened the second half needing only 87 seconds to score, as Nett ran in from five yards out.

Later in the period, Gregory found Nett over the middle for 34 yards and his second touchdown throw to make it 28-0.

After Nelson County scored to open the fourth quarter, Elizabethtown followed with its final touchdown.

The drive started at the Panther 20-yard line and only needed two plays. Drew Carmon opened with a 30-yard run and Durbin capped it with a 50-yard jaunt.

Carmon helped the rushing attack with 44 yards and tight end Carter Moberly led the receivers with two catches for 81 yards.

The Panthers went to 1-1 in league play and 2-3 overall. The team returns to Nelson County this week for a 7:30 p.m. game against Thomas Nelson Friday.

DANVILLE 28, NORTH HARDIN 25. The Trojans fell behind late and returned to Radcliff with a loss to the host Admirals Friday night.

Down 7-0 at the end of the first quarter, North Hardin responded with 4:59 until halftime by capping off a 10-play drive on a 13-yard touchdown pass to Skyler Coffey. Neither team would strike the end zone again before the second quarter came to a close and the game went into halftime tied at 7-7.

After Danville again took control with 11:47 left in the third quarter, the Trojans answered a few minutes later on a 92-yard touchdown run from Shaun Boykins at the 8:25 mark. Both teams missed their extra point attempts, leaving the game tied at 13-13 after Boykins’ trip to the end zone.

North Hardin didn’t let it stay tied for long. With 3:15 to go in the third quarter and the offense facing third and 20, Manie Wimberly hit Coffey for a 42-yard touchdown pass. After a missed two-point conversion, the Trojan lead stood at 19-13 and remained there through the end of the third quarter.

The back-and-forth battle continued in the fourth quarter when Danville’s Mauri Brown capped off a 13-play drive with a two-yard punch into the end zone with 9:39 left to play. The extra point was good this time and gave the Admirals a 20-19 lead.

North Hardin got back in the end zone a little over three minutes later on an eight-yard scamper by David Boyd with 6:10 remaining. The 2-point conversion was no good again, putting the Trojans up 25-20 following the touchdown.

After Danville scored again with 3:30 left and connected on the 2-point conversion, North Hardin had the chance to tie the game on a 31-yard field goal attempt that sailed wide right.

APOLLO 29, MEADE COUNTY 20. A dominant start to their first game since Aug. 27 turned into a home loss for the Green Wave Friday in Brandenburg.

With Meade County up 20-0 with 7:25 left in the first half, the Eagles cut it to 20-7 before halftime and continued to get their offense rolling from there.

Apollo added another touchdown with 3:37 left in the third quarter and cut the Green Wave’s lead to 20-14, then took control on its third trip to the end zone with 11:49 remaining in the fourth quarter to make it a 21-20 game.

Meade County fell further behind following a fourth Eagle touchdown and 2-point conversion with 6:13 left on the clock to cap off scoring for the evening.

FORT KNOX 40, FORT CAMPBELL 0. The Eagles earned their second win of the season and first home win since Nov. 1, 2019 in a shutout Army Bowl victory over the Falcons Friday.

Tristin Griffin took the opening kickoff 55 yards to the end zone to put Fort Knox on the board with the first play of the game. Two plays later, Griffin took an interception 50 yards to the house for a pick six to put the Eagles up 14-0 just one minute into the game.

By halftime, this lead had expanded to 28-0.

Lionel Taylor caught two passes for 85 yards and one touchdown. Aldrick Murray had the other touchdown catch and finished with three catches total for 13 yards.