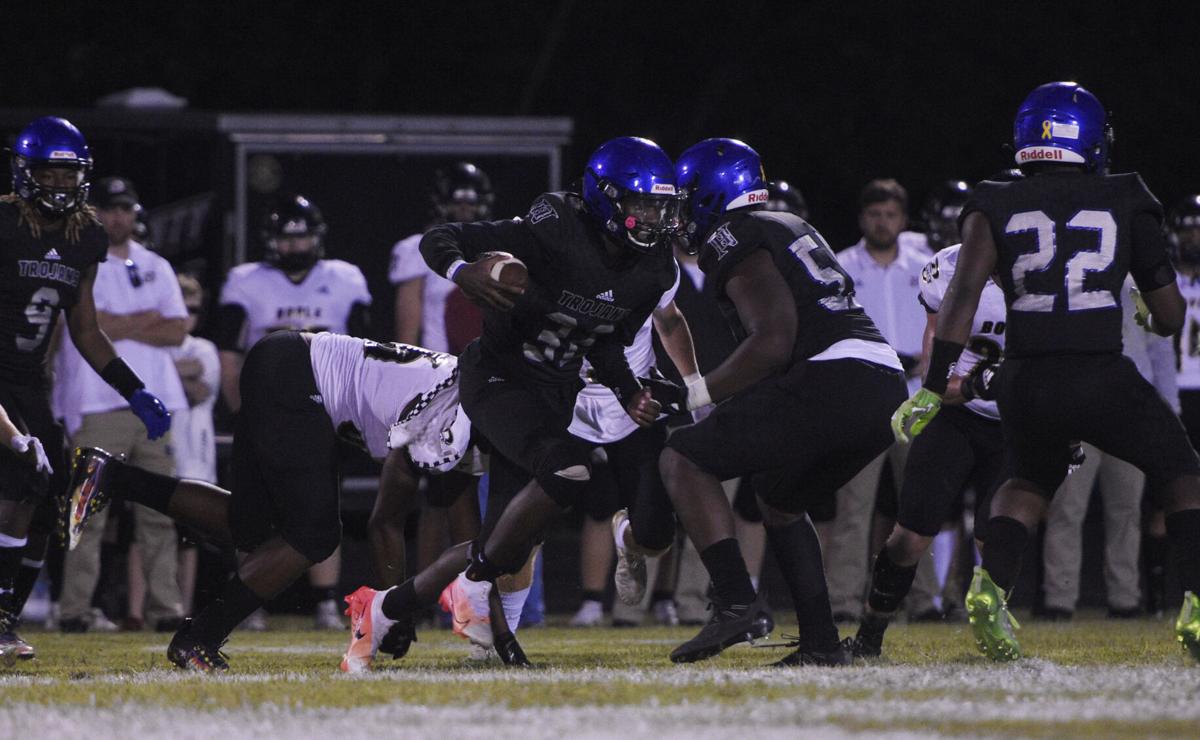 North Hardin's Jayden Thorpe looks for room to run in the second quarter of Friday's home game against Boyle County. The Trojans were held to one touchdown in a loss to the Class 4A No. 2 Rebels. 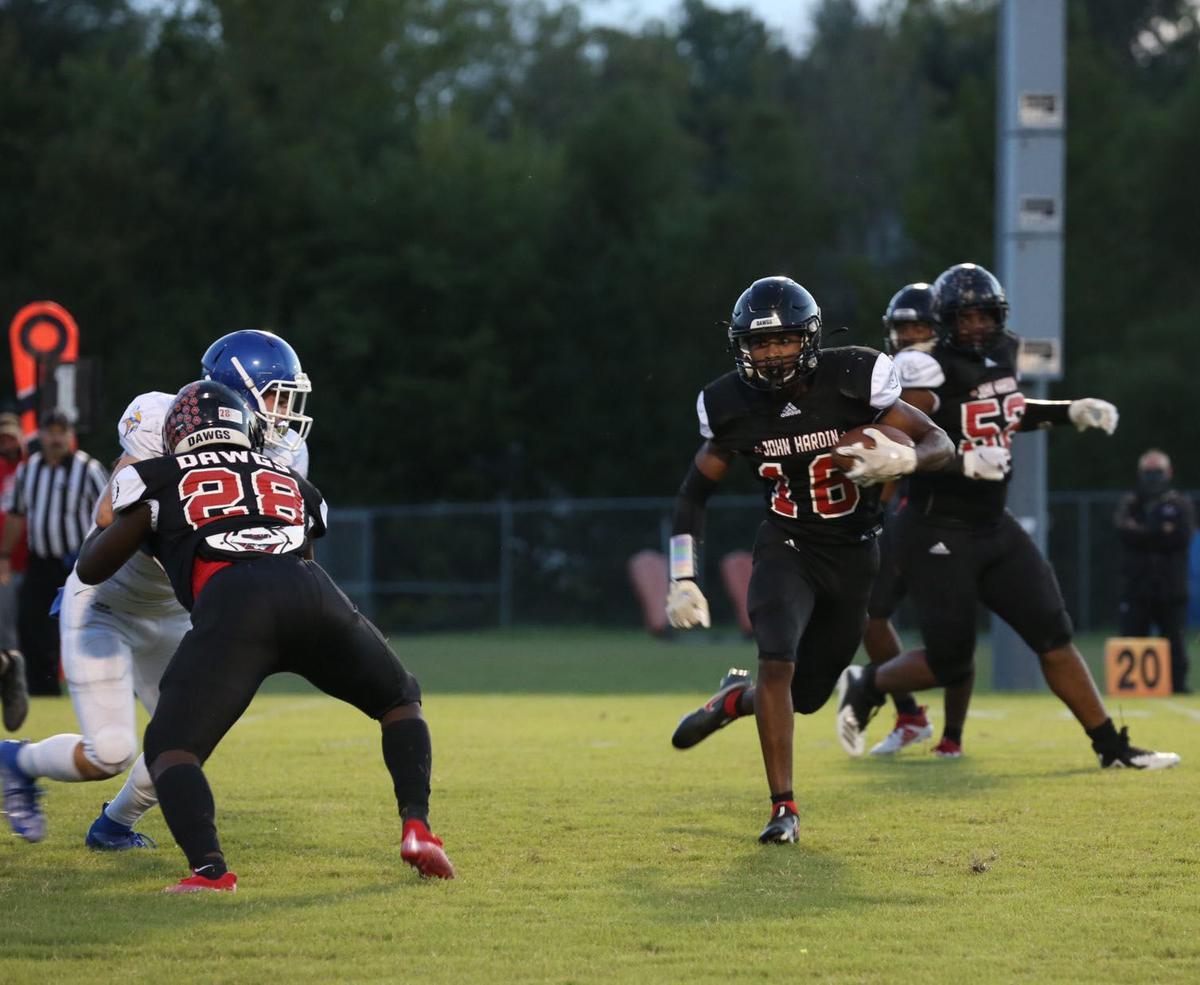 John Hardin's Quintin Clay moves the ball during Friday's home game against Valley. The Bulldogs' return from a one-game COVID postponement saw them put up 70 in a shutout victory over the Vikings. 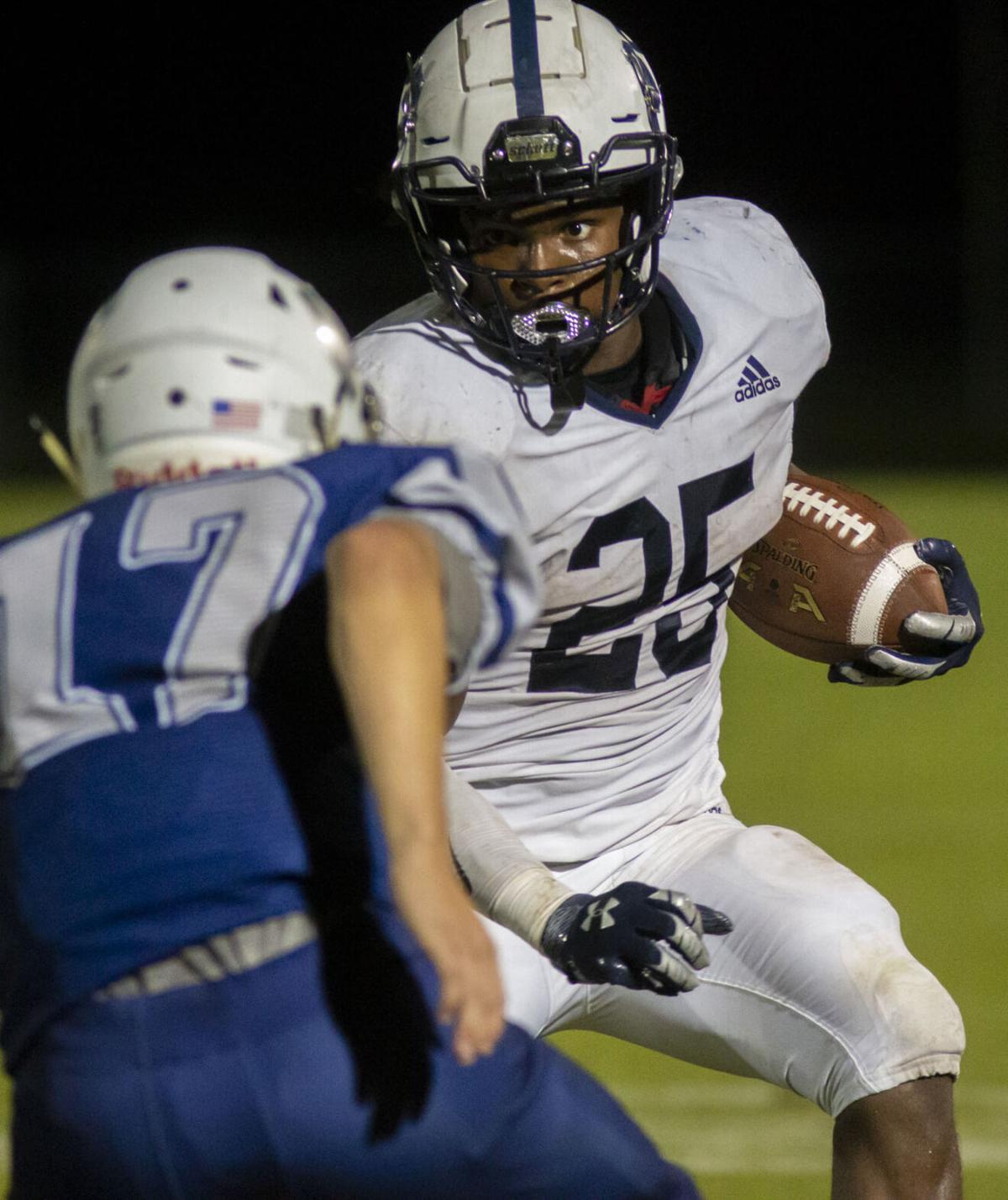 North Hardin's Jayden Thorpe looks for room to run in the second quarter of Friday's home game against Boyle County. The Trojans were held to one touchdown in a loss to the Class 4A No. 2 Rebels.

John Hardin's Quintin Clay moves the ball during Friday's home game against Valley. The Bulldogs' return from a one-game COVID postponement saw them put up 70 in a shutout victory over the Vikings.

North Hardin football’s return home didn’t go as hoped Friday night. Hosting Boyle County, the defending Class 4A state champion Rebels backed up their Class 4A No. 2 ranking with a 49-6 walloping of the Trojans.

Boyle County got it started with a pair of first quarter touchdowns, the first on a 3-yard quarterback keeper by Jagger Gillis with 8:31 left in the quarter and then a 45-yard pass from Gillis to Cole Lanter with 5:44 on the clock.

Still up 14-0 after the first quarter’s completion, Gillis and Lanter connected again on 4th & 28 for a 31-yard touchdown pass with 1:15 to go until halftime.

The Trojans wouldn’t have to wait long to respond. On the ensuing punt return, Micah Parmes took it 96 yards to the house to put North Hardin on the board with 58.6 seconds remaining until halftime. Parmes’s touchdown sent the Trojans into the locker room trailing 21-6 after their extra point attempt was blocked.

The second half was all Boyle County, starting with special team and offensive turnovers hurting North Hardin early in the third quarter. The first Rebel touchdown of the second half came when Tommy Ziesmer blocked a Trojan punt and returned it 37 yards to the end zone at the 7:19 mark. A few seconds later, Boyle County’s Cole Sims forced a North Hardin fumble, which was recovered by Daulton Peetz in the end zone to make it a 35-6 game with 7:05 left in the third quarter.

The Rebels would score twice more before the game’s conclusion, the first of which initiated a running clock with 3:31 left in the third quarter.

JOHN HARDIN 70, VALLEY 0. The Class 4A No. 9 Bulldogs wasted no time getting back to business in their first game since Sept. 10, opening Class 4A District 3 play with a blowout home victory over the Vikings Friday.

John Hardin (3-3) returns to action next week with a 7:30 p.m. game against Lincoln County on Friday.

Zakery Spurrier got it started with a 23-yard pass to Adam Hobbs to put Central Hardin up 6-0 with 7:21 left in the first quarter. The Bruins continued to run away from there, reaching 25-0 on a 12-yard touchdown run from Terry Brooks with 8:13 left in the second quarter before Fern Creek was eventually able to get on the board.

The Bruins would add another 13 points before the game came to a close to easily defeat the Tigers and get back in the win column after suffering their first loss of the season the week prior.

Central Hardin (5-1) opens district play with a road trip to Barren County on Friday. Kickoff is set for 7 p.m.

ELIZABETHTOWN 39, THOMAS NELSON 12. The Panthers won their second straight game in a Class 3A District 3 road win over the Generals Friday.

Hall was at it again early in the second quarter, punching in from two yards out with 9:15 until halftime. Hall’s second touchdown put the Panthers up 19-0 following a failed 2-point conversion. Elizabethtown notched one more touchdown before Thomas Nelson scored its first when Ryder Gregory connected with Evan Shelton for an 8-yard touchdown pass with 1:22 left until halftime. Bell followed with the extra point to expand the Panther lead to 26-0.

The Generals got on the board shortly after on a touchdown pass with 1:05 left in the first half but failed to make the extra point. Thomas Nelson would be held to just six more points through the game’s remainder.

Elizabethtown (3-3) returns home to face Ashland Blazer in a rematch of last year’s Class 3A state championship game Friday. The Panthers and Tomcats will square off at 7:30 p.m.

BARDSTOWN 46, LaRUE COUNTY 30. The Hawks came out on the losing end a high-scoring Class 3A District 3 game against the Class 3A No. 1 Tigers Friday night in Bardstown.

Scoreless after the first quarter, Bardstown jumped out to a 24-8 lead by halftime. The Hawks cut it to 24-16 with 10 minutes left in the third quarter after Conlee Crossno recovered a Tiger punt and returned it 60 yards for a touchdown, which was followed by a successful 2-point conversion by Kellen Bowen.

Bardstown went on to add 16 unanswered points, finishing the third quarter up 32-16 and making it 40-16 with 9:37 left in the fourth quarter.

LaRue County scored twice more before the game’s conclusion. The first came on a 20-yard run from Crossno with 7:34 to go. Down 46-22 following another Bardstown touchdown, Camrin Williams caught a 56-yard touchdown pass from Cutter Boley. Bowen followed with another 2-point conversion to make it a 46-30 game with 2:34 remaining. The Hawks were unable to cut it any closer before time expired.

BULLITT EAST 33, MEADE COUNTY 6. The Green Wave dropped their second straight game since returning from a two-week stretch of COVID-related cancellations on the road Friday.

Meade County (1-5) travels to Radcliff next week for a Class 6A District 2 game against North Hardin this Friday. Kickoff is slated for 7:30 p.m.

CAMPBELLSVILLE 34, FORT KNOX 14. The Eagles were unable to build on last week’s win over Fort Campbell and returned home with a Class 1A District 2 loss to Campbellsville Friday.