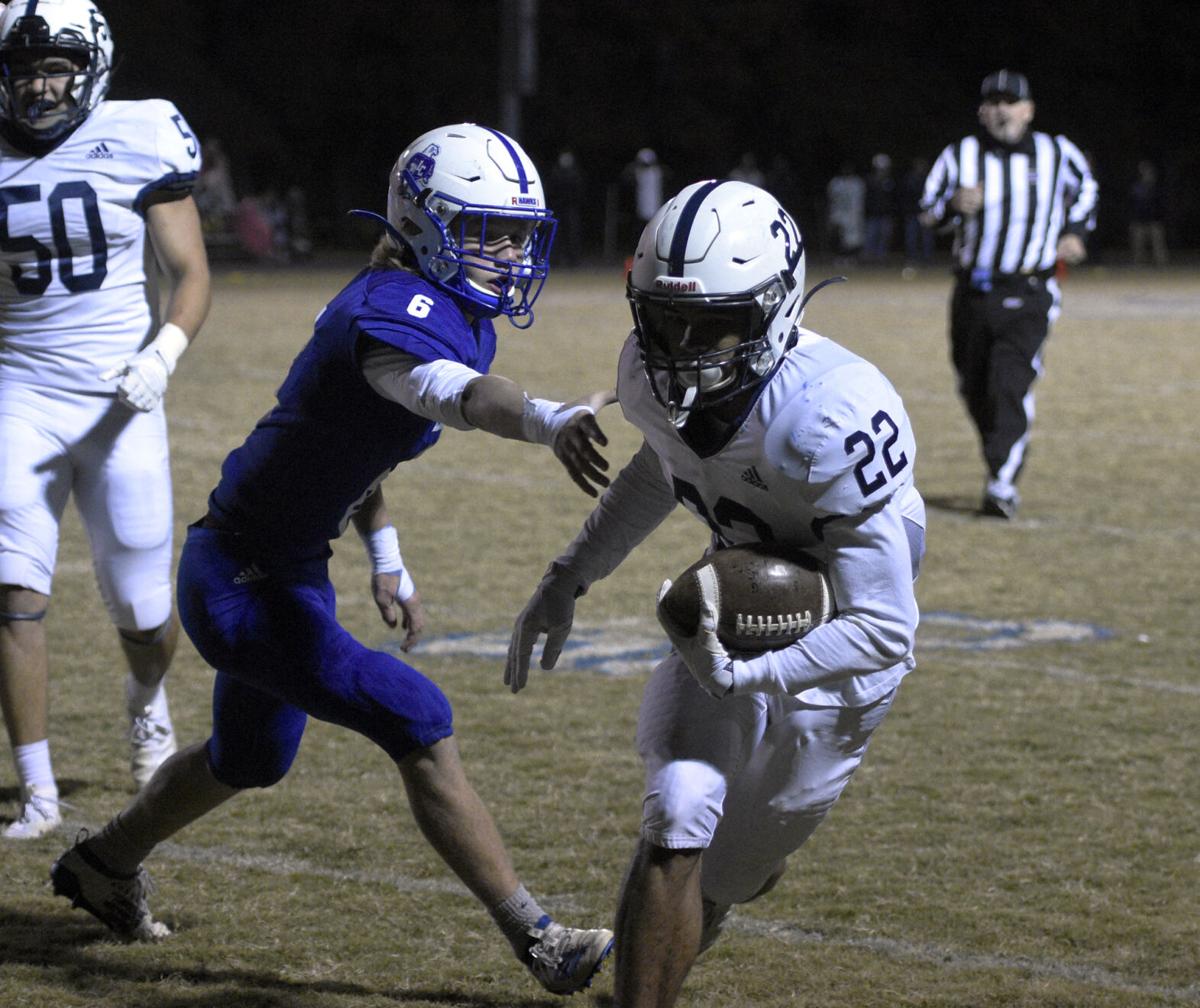 Elizabethtown’s Khia Sherrard evades LaRue County’s Tom Shelton after catching a pass from Clay Games during the third quarter of Friday’s game in Hodgenville. Sherrard scored the last of the Panthers’ eight touchdowns late in the fourth quarter, capping off a second-half turnaround for Elizabethtown. 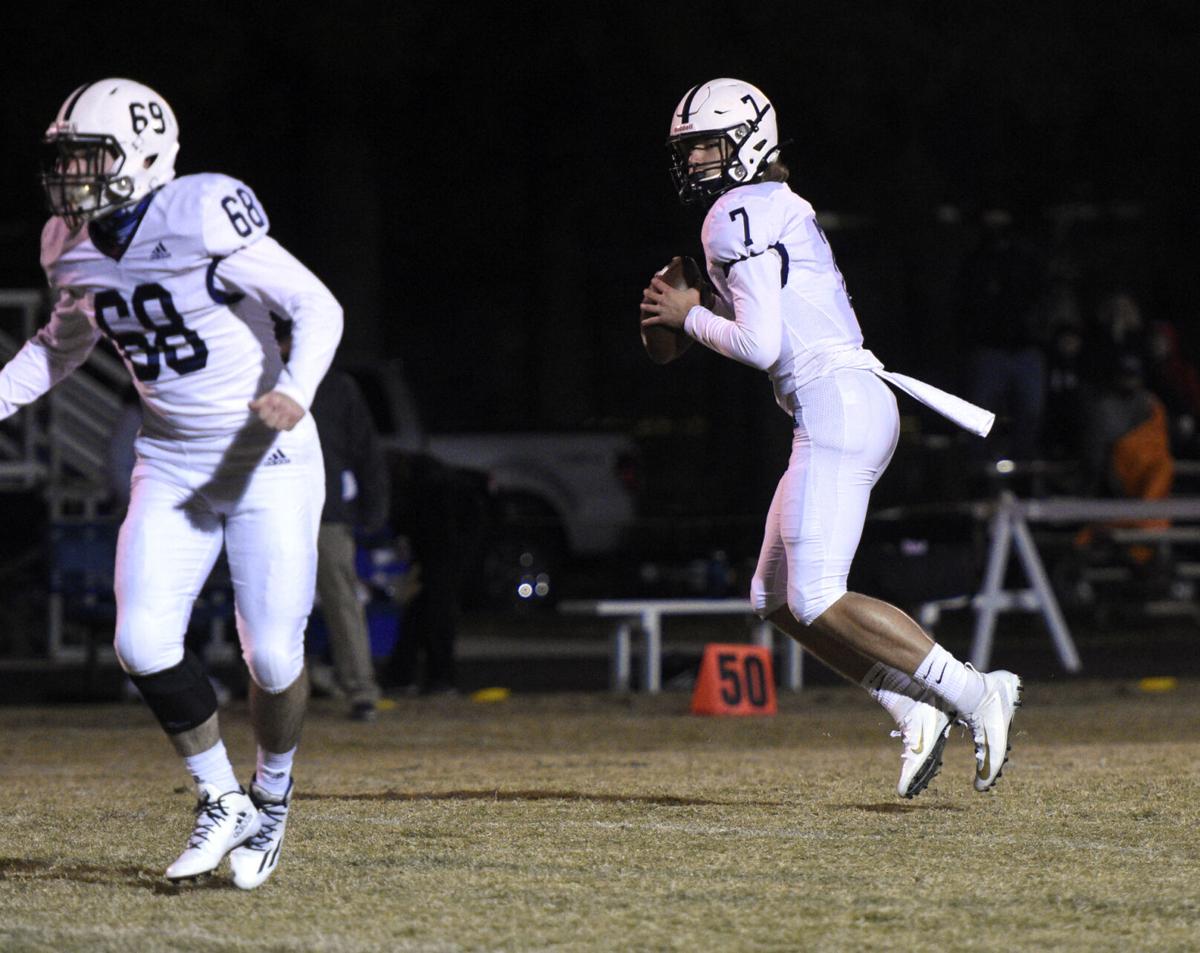 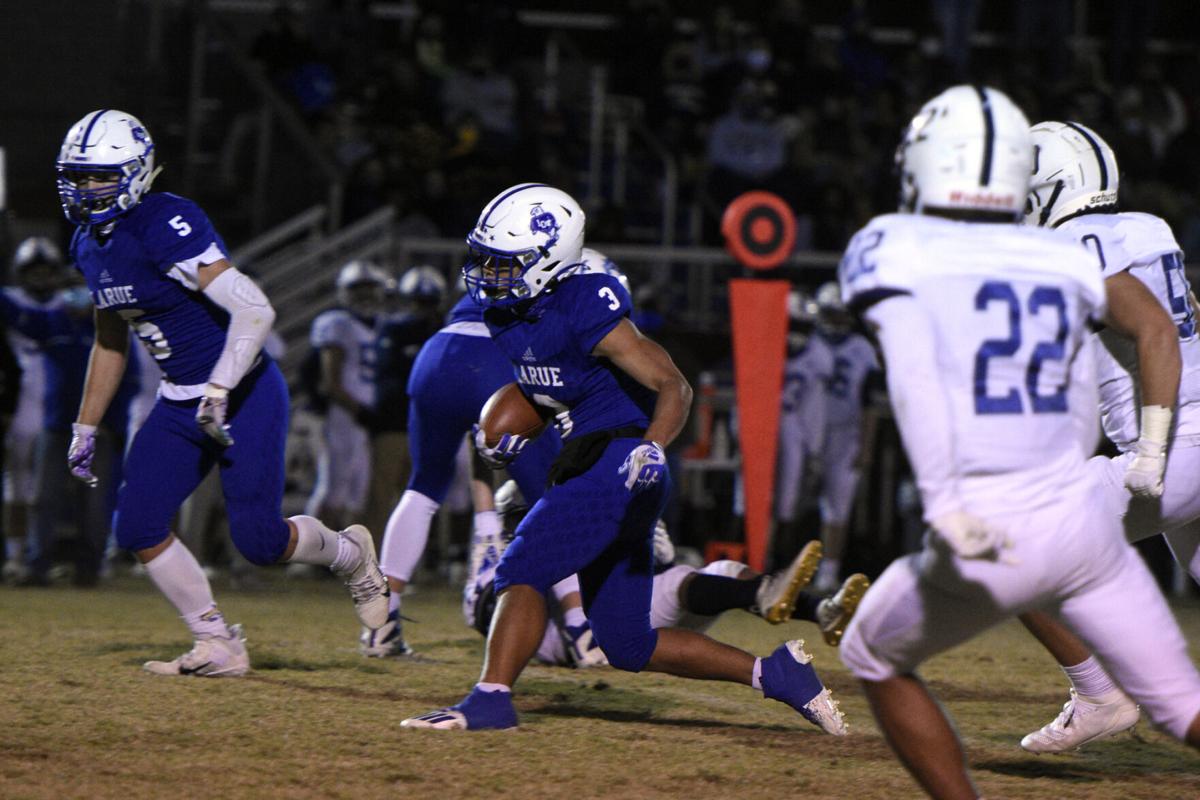 LaRue County’s Jeremiah Belton runs the ball in the first quarter for what would be a 35-yard Hawk touchdown.

Elizabethtown’s Khia Sherrard evades LaRue County’s Tom Shelton after catching a pass from Clay Games during the third quarter of Friday’s game in Hodgenville. Sherrard scored the last of the Panthers’ eight touchdowns late in the fourth quarter, capping off a second-half turnaround for Elizabethtown.

LaRue County’s Jeremiah Belton runs the ball in the first quarter for what would be a 35-yard Hawk touchdown.

Camran McNeil was hoping to see more out of Elizabethtown at halftime of Friday’s district 3 matchup against LaRue County.

The 3A No. 1 Panthers hadn’t had their best half of the season and had gone into the locker room trailing the Hawks 14-12.

“It was a sloppy game,” McNeil said. “We knew we didn’t execute too well, but we came out in the second half and we executed much better. We did what we had to do.”

Elizabethtown started to back up its No. 1 ranking from the third quarter on, taking off for a 53-20 District 3 victory in Hodgenville.

“I thought (Hawks coach Josh Jaggers) and LaRue County did a great job game-planning for us,” Elizabethtown coach Ross Brown said. “We came out a little lackadaisical, not executing. It took us a half to warm up and thankfully we did and didn’t walk out of here with a loss.”

The win improved the Panthers to 6-0 on the season. Despite opening the second half trailing LaRue County by two, this was also the fifth straight game for Elizabethtown in which its win margin was 30 points or higher.

“I kind of feel like in the first half we were playing uninspired. It’s not like we came out in the second half and did anything really that much differently from a scheme standpoint,” Brown said. “It was just executing and getting it done. They came out in the third quarter and seemed to play with a lot more fire and the way that we normally do.”

The Hawks fell to 3-2 on the season, with their only other loss coming against 6-0 Bardstown on Sept. 25.

“That first half, we saw glimpses of how good we can be, even with such a very youthful team that we have. We saw glimpses of the potential that we have this year,” Jaggers said. “It was squared up, kind of nose-to-noes, toes-to-toes and we came out and battled. Dang, we battled. Then the third quarter was just an absolute implosion.”

Elizabethtown got on the board first when quarterback Clay Games connected with McNeil on a seven-yard touchdown pass to close out the game’s first drive.

LaRue County responded on its ensuing offensive possession when Jeremiah Belton ran 35 yards to the end zone. Belton’s touchdown tied the game at 6-6 with 4:37 left in the first quarter after a missed extra point by the Panthers and a failed two-point conversion by the Hawks.

The back-and-forth start to the game continued on the following Elizabethtown possession when Games completed a deep pass to Alandre Murphy for a 60-yard touchdown. The two-point conversion attempt was unsuccessful and the Panthers finished the first quarter up 12-6.

It didn’t take long for LaRue County to answer once the second quarter got started. Getting the ball back after Elizabethtown went three and out, Hawks quarterback Cutter Boley connected with Kellen Bowen for 51 yards and a touchdown. Boley found Bowen again on the two-point conversion attempt to put LaRue County up 14-12 with 10:14 left in the first half.

Elizabethtown went into halftime still trailing by same deficit, but returned from the break to dominate the second half.

The Panthers started off with a 66-yard touchdown run by McNeil to put themselves up 18-14 with 10:29 left in the third quarter. McNeil was back in the end zone just under seven minutes later when he and Games connected on another touchdown pass, this time from 10 yards out.

The Elizabethtown defense added to the team’s lead shortly after when Trey Durbin recovered a fumble and took it back to the end zone. Another PAT put the Panthers up 32-14 on the Hawks with over three minutes left to play in the quarter.

“We did our assignments,” Durbin said. “We turned up with the fumble recovery and the interceptions.”

A 57-yard Kam Sherrard touchdown run wrapped up a 27-point third quarter for Elizabethtown, with the Hawks trailing 39-14.

McNeil would find one more touchdown early in the fourth quarter, bringing his total to four on the night.

“I’m just glad I could help the team get a win,” McNeil said. “I’ve got to give a shoutout to my front up, my front seven guys, my linemen. They blocked their butts off for me and I was just able to make the plays, make the cuts, so that’s props to them, hats off to them. They played a great game.”

LaRue County found one more when Boley hit Preston Self from 12 yards out to make it a 46-20 Elizabethtown lead.

The Panthers responded with one more touchdown courtesy of Kam Sherrard to bring the game to its final score.

Elizabethtown (6-0) travels to Bardstown Friday for a matchup of unbeaten District 3 foes. The game is set to kick off at 7:30 p.m.

LaRue County (3-2) is on pause this week after being previously scheduled to play Hart County on the road. The game was called off in a mutual decision due to COVID-19 concerns.