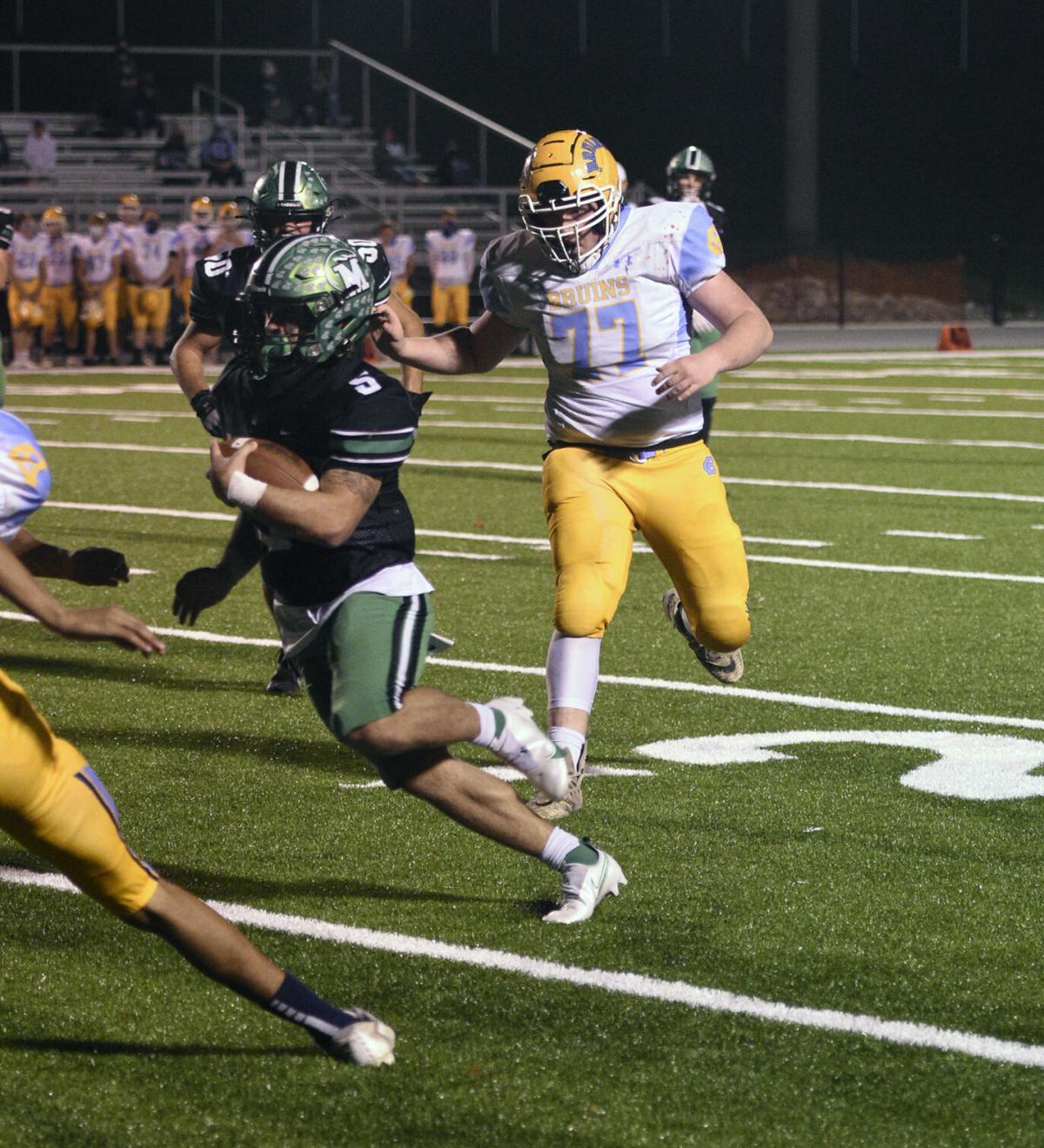 Meade County’s Austin Oppel runs the ball past Central Hardin’s Kyle Browning in the fourth quarter of Friday’s game. Oppel had two rushing touchdowns and threw a passing touchdown in the playoff win. 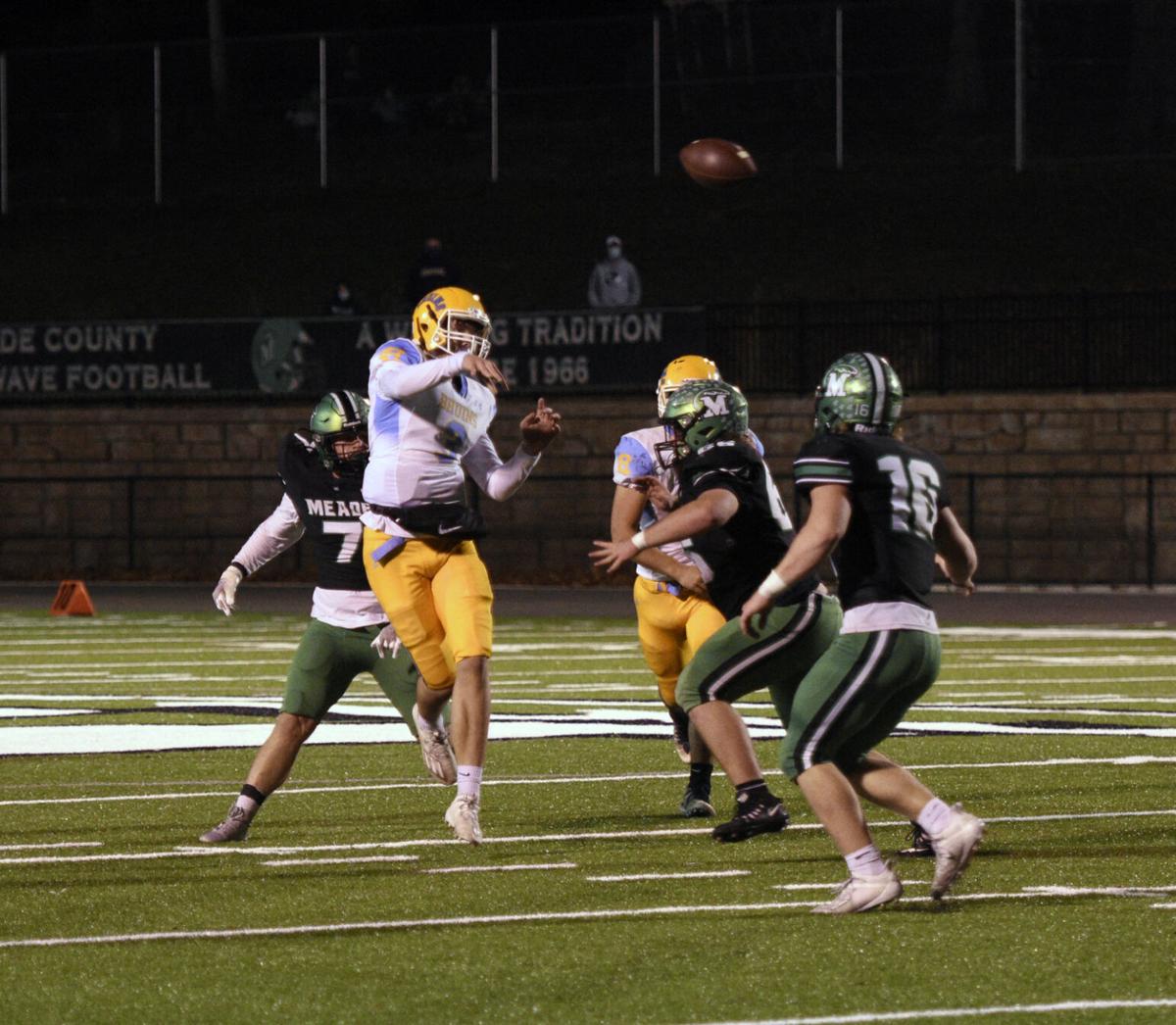 Meade County’s Austin Oppel runs the ball past Central Hardin’s Kyle Browning in the fourth quarter of Friday’s game. Oppel had two rushing touchdowns and threw a passing touchdown in the playoff win.

The last time Meade County football met Central Hardin on the gridiron, the Bruins picked up their first win of the season at home over their district foe by a score of 38-18.

It was the Green Wave who had the last laugh Friday night in Brandenburg.

Opening the Class 6-A playoffs at home, Meade County avenged its earlier loss and defeated Central Hardin in the rematch 21-9.

“At this point, it’s just win and go on. Style points really don’t count. We were having a hard time there finishing it, but you’ve gotta credit Central Hardin’s kids for their resiliency. They kept on fighting,” Green Wave coach Larry Mofield said. “It was a good win for our kids. I’m proud of our kids.”

The victory improved Meade County to 4-5 on the season and was the team’s third straight.

For the Bruins, the loss brought their season to a close with a 1-5 record.

“Coach Mofield, he’s a class act. That’s his hundredth win and I knew coming in tonight that he had a chance. He gave me a chance in 2004, he gave me a job here and I just want to say hats off to him. I’ve got all the respect in the world for him and he deserves this win,” Central Hardin coach Tim Mattingly said. “They deserve this win, because they hit us in the mouth and we didn’t respond and they were more physical tonight than we were.”

Austin Oppel continued to play an important role in Meade County’s offense. The senior running back’s versatility was on display Friday, leading the team in both rushing and passing and bringing in two rushing touchdowns and a passing touchdown.

Oppel also had a pass reception on a trick play.

“We were very confident this week. We didn’t feel like anybody was nervous,” Oppel said. “We knew that we had the team to do it. We just did and we showed it.”

All but two of Oppel’s completed passes were caught by senior wideout JJ Richardson, including a 47-yard touchdown pass in the third quarter to put Meade County up 14-3.

“We looked at each other, gave us a nod and we were knew what we were doing,” Richardson said. “We just had that chemistry together.”

A scoreless end to the first quarter saw the Green Wave take a 7-0 lead with 10:33 to go in the second quarter off a 30-yard touchdown run from Oppel and ensuing extra point.

Central Hardin responded with 2:46 left until halftime off a 23-yard field goal by Evan Jones to cut Meade County’s lead to 7-3. Neither team found any more points before the first half came to a close and the Green Wave went into the break with a four-point lead.

Meade County found 14 more points in the second half, starting with Oppel’s 47-yard pass to Richardson with 5:53 remaining in the third quarter.

Oppel followed this up in the fourth quarter with his second rushing touchdown, this time from three yards out.

The touchdown and following PAT gave the Green Wave a 21-3 lead with 4:49 on the clock.

With 1:05 to play, Central Hardin found its first touchdown of the night when Trent Hill pushed into the end zone from the 1 yard line. An unsuccessful two-point conversion on another run by Hill made it a 21-9 game with just over a minute remaining.

An onside kick gave Central Hardin one more chance to tighten the game, but the team was unable to get back into the end zone before time expired.

Up next for Meade County is 8-0 North Hardin, who opened the postseason with a 42-6 win over Barren County on Friday night.

The Green Wave and Trojans will square off this Friday at 7 p.m.

“North’s an outstanding football team, one of the top teams in the state in any classification. (Coach Brent Thompson) is one of the finest coaches around. They’ve got great players,” Mofield said. “The only thing I can say is we get to fight another day and I just hope we show up and fight.”