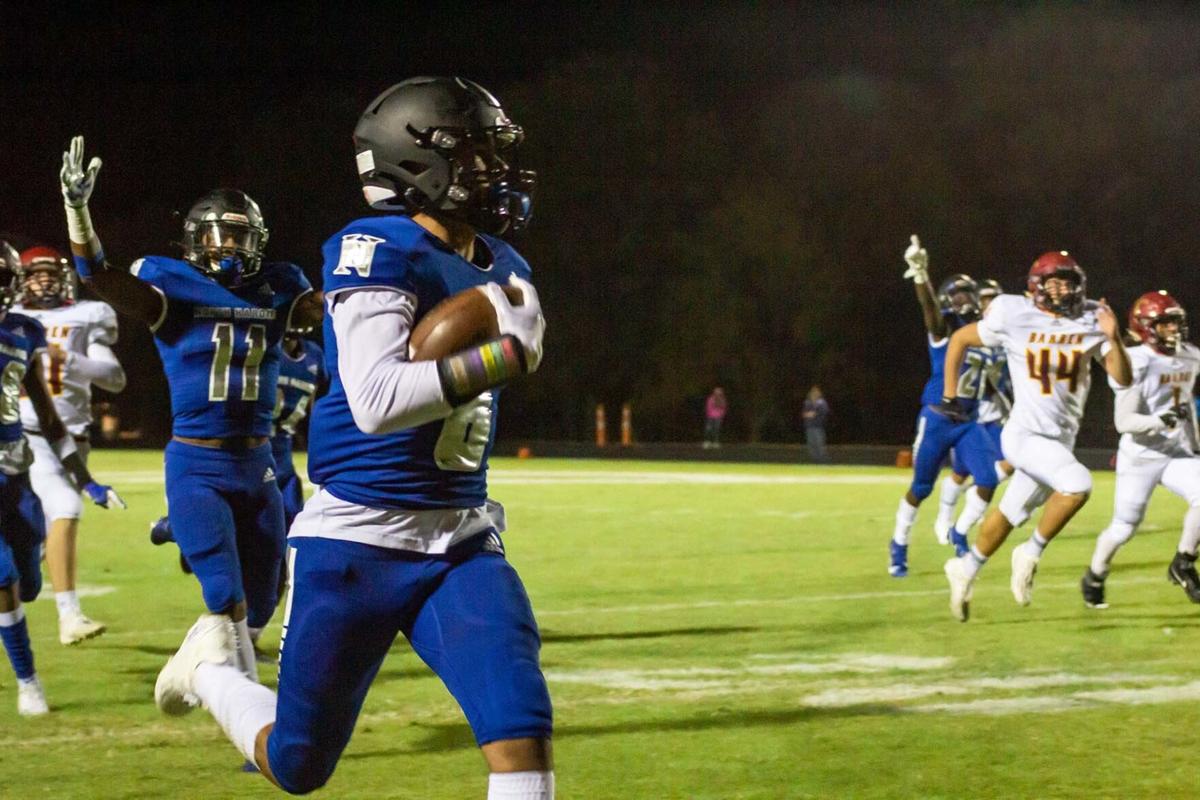 GINA CLEAR/The News-Enterprise North Hardin senior wide reciever Marcus Harris runs for his first of two touchdowns on a punt return Friday as his teammates, including Lavell Wright (11), celebrates at Ray Story Stadium in Radcliff. The touchdown tied the score 6-6 with visiting Barren County and Cayden Logsdon’s point after put North Hardin in the lead for good. 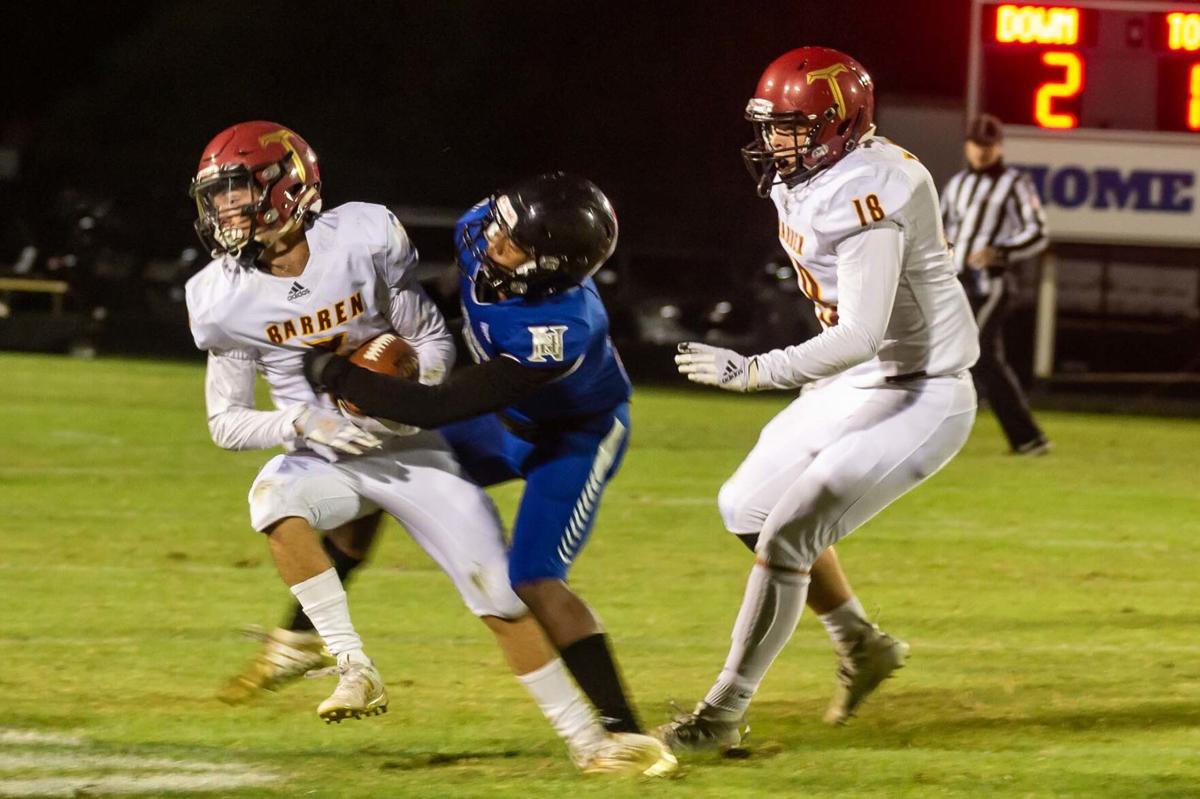 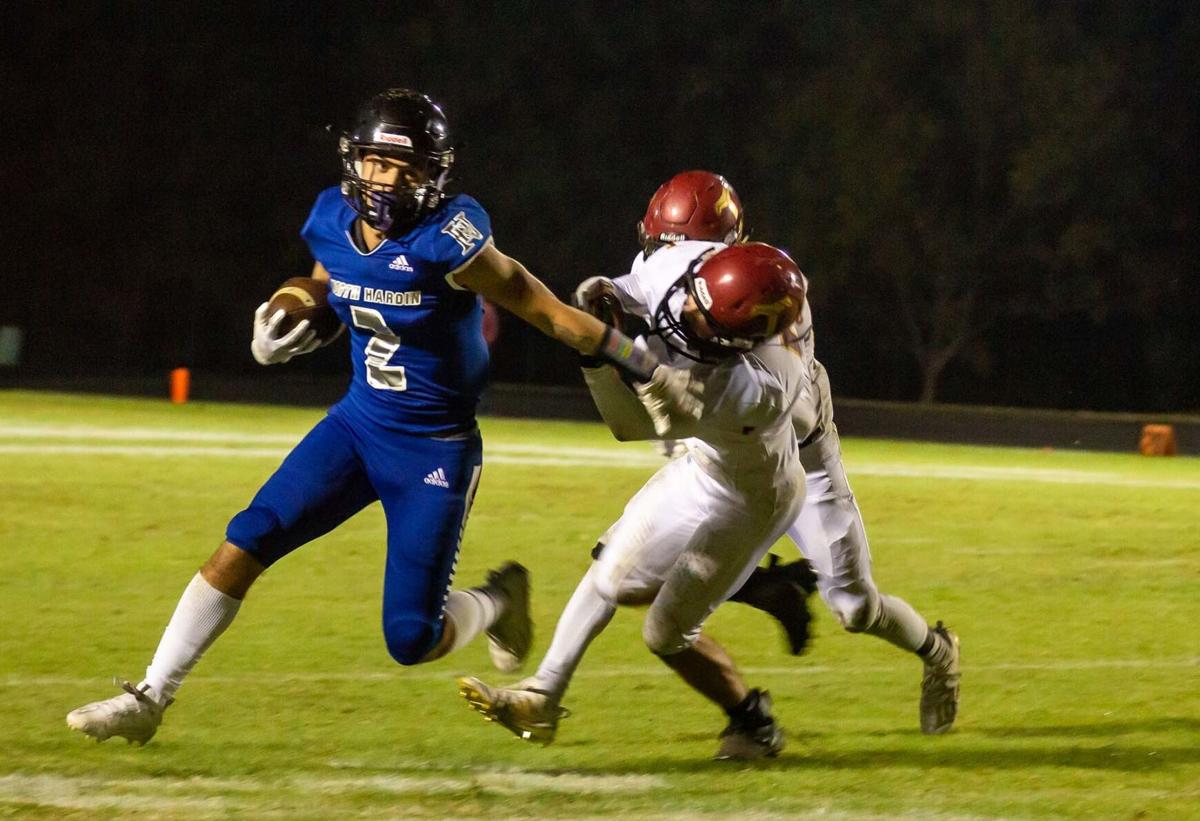 GINA CLEAR/The News-Enterprise North Hardin senior wide reciever Marcus Harris runs for his first of two touchdowns on a punt return Friday as his teammates, including Lavell Wright (11), celebrates at Ray Story Stadium in Radcliff. The touchdown tied the score 6-6 with visiting Barren County and Cayden Logsdon’s point after put North Hardin in the lead for good.

It was a sight Barren County would only see once - North Hardin’s end zone.

In a battle between two Trojan teams, Barren County was the first to find the end zone Friday night in their district matchup with North Hardin. But those 6 points were the only ones North Hardin would allow for the rest of the evening as the home Trojans cruised to a 38-6 victory at Ray Story Stadium in Radcliff.

“We slipped up and let them get that one touchdown, give them a little confidence boost, but we had to go ahead and nip that in the bud,” North Hardin senior linebacker Michael Lunz said. “We came out in the second half and was able to get a shut out for the rest of the night.”

The first touchdown came with 1:50 left in the first quarter on a 48-yard reception to Barren County senior wide receiver Jamarcus Miley. A two-point conversion run attempt came up short.

But it only took 12 seconds for the North Hardin Trojans to respond.

On the ensuing kickoff, senior Marcus Harris ran for 85 yards to put North Hardin on the board.

Cayden Logsdon connected on the PAT to give North Hardin the lead by one, 7-6, and they never looked back.

“We needed a pop of offense so when I got it, I knew I had to do something with it,” Harris said about the kickoff return. “I think that is what turned us up. It got the offense hype. It was the boost that we needed.

“We have to start coming out more explosive in the first half,” he added. “When we get to the playoffs, we can’t do that against good teams because they’re going to take advantage of it.”

Senior wide receiver and defensive back Camron Smith, who scored North Hardin’s final touchdown on a 20-yard touchdown reception, said the sluggish offensive start is something the Trojans are working to address.

“We have to come mentally focused,” he said. “Coach (Brent Thompson) has been telling us we can’t come out soft on teams. We want to put points up on the board and it starts with the first snap of the game. We haven’t been coming mentally prepared for these last couple of weeks.”

Although he agreed with his player’s assessment of the Trojans’ slow start, Thompson gave it a positive spin.

“I think it was definitely a wake up call,” he said. “It’s one thing we’ve talked about. It was definitely a sluggish start. The way I look at it, on a positive note, is they responded. We very easily could have said, ‘Oh no, we’re in a dog fight.’ In the first half we were, but then we decided to put it all together and run away with it.”

North Hardin gave up 138 yards passing, which Thompson said was partly to do with his defense working on something new.

“We were doing something a little different defensively early in the game and as soon as we started to see what they were doing after that first drive, we adjusted what we were doing as far as that - coverage wise and blitzes,” he said. “So we took care of that. They obviously exploited that early on.”

In the second quarter, Harris found the end zone again, this time on a 45-yard punt return. Logsdon again connected on the PAT to make it 14-6 North Hardin.

Late in the second quarter, Jordan Lovett ran an interception back 100 yards for what looked to be the third North Hardin touchdown, but the play was called back on an illegal block in the back.

The Trojans scored four times in the second half. Senior running back and UK commit La’Vell Wright had a 58-yard run to find the end zone in the third. Then, as time was winding down in the quarter, junior punter Alex White dropped the snap, recovered and scrambled for a first down. With 10 seconds left, senior wide receiver Jalen Sharps had an 18-yard reception to put the Trojans up 27-6.

Logsdon connected on all five PAT attempts and had a 25-yard field goal in the fourth quarter. Smith’s touchdown closed out North Hardin’s scoring for the evening.

In all, North Hardin had 316 yards total offense, with 170 yards coming in the air on 18-28 passing from junior quarterback Manie Wimberly.

Still undefeated, North Hardin improved to 6-0 on the season, 2-0 in district play.

North Hardin will next face Central Hardin at 7 p.m. Friday at home in another district matchup for the team. If they win, it would be the first time in school history the Trojans have won the district championship three years straight.

“We got to work a lot on ourselves,” Thompson said about preparing for the district matchup with the Bruins. “Obviously we don’t want to have a sluggish start. They’re a very formidable opponent, so we’ll see what they’re about. We’ll have a chance to win another district championship, so we’ll see you Friday night.”