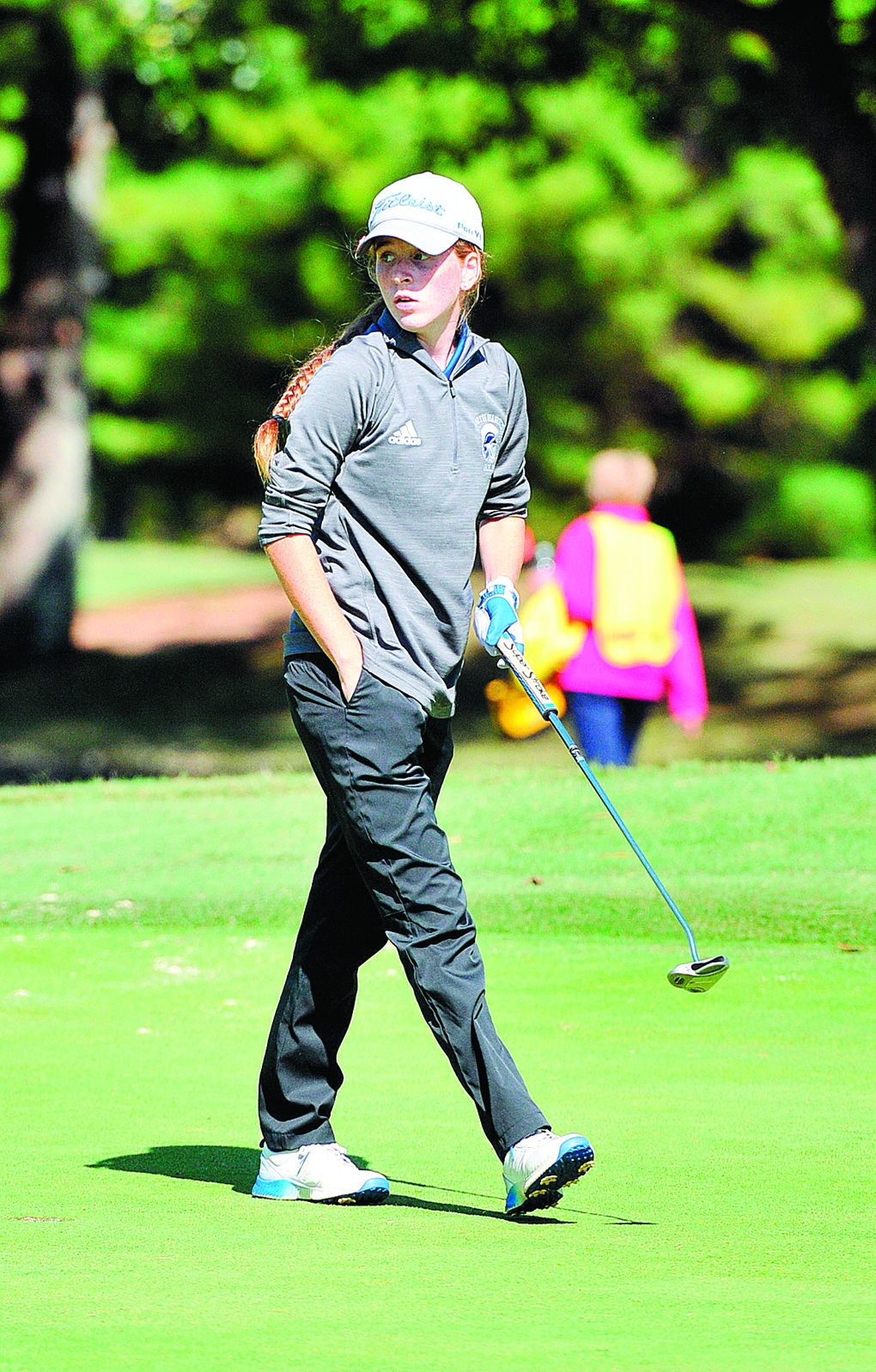 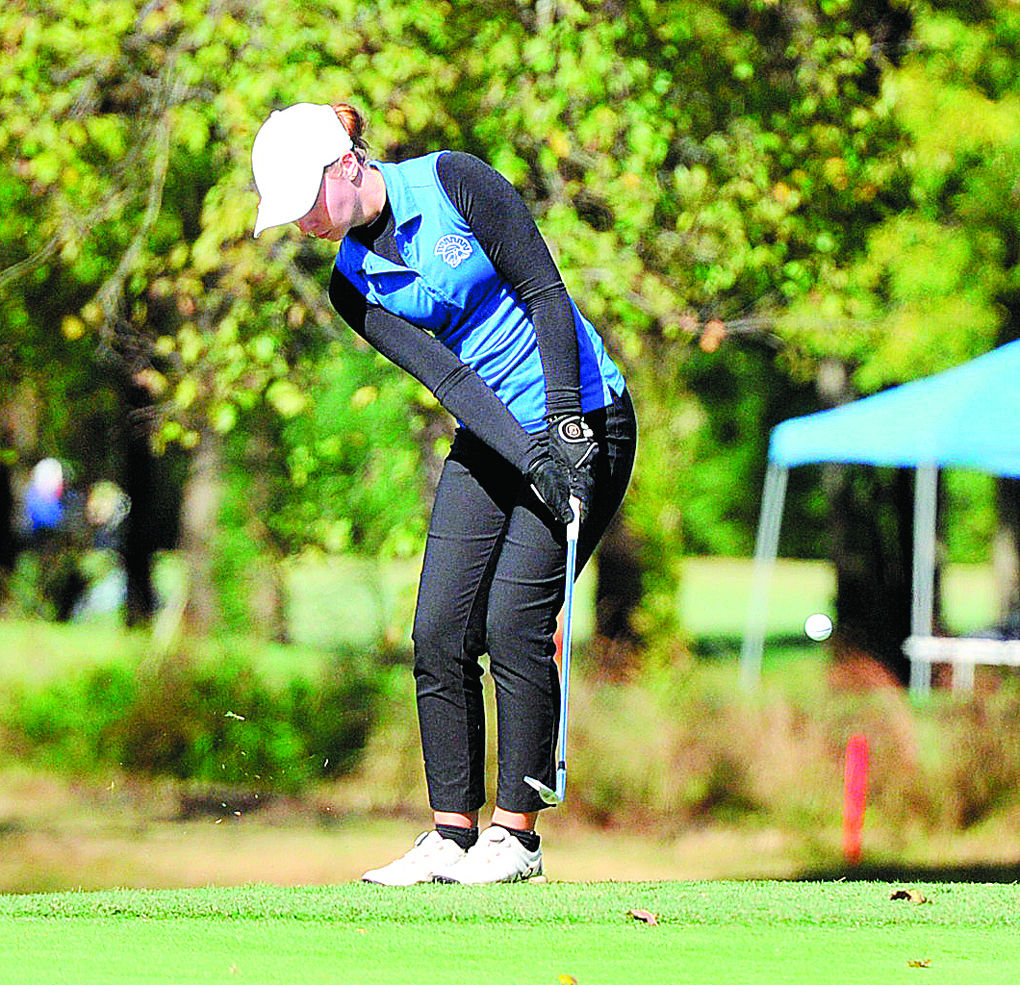 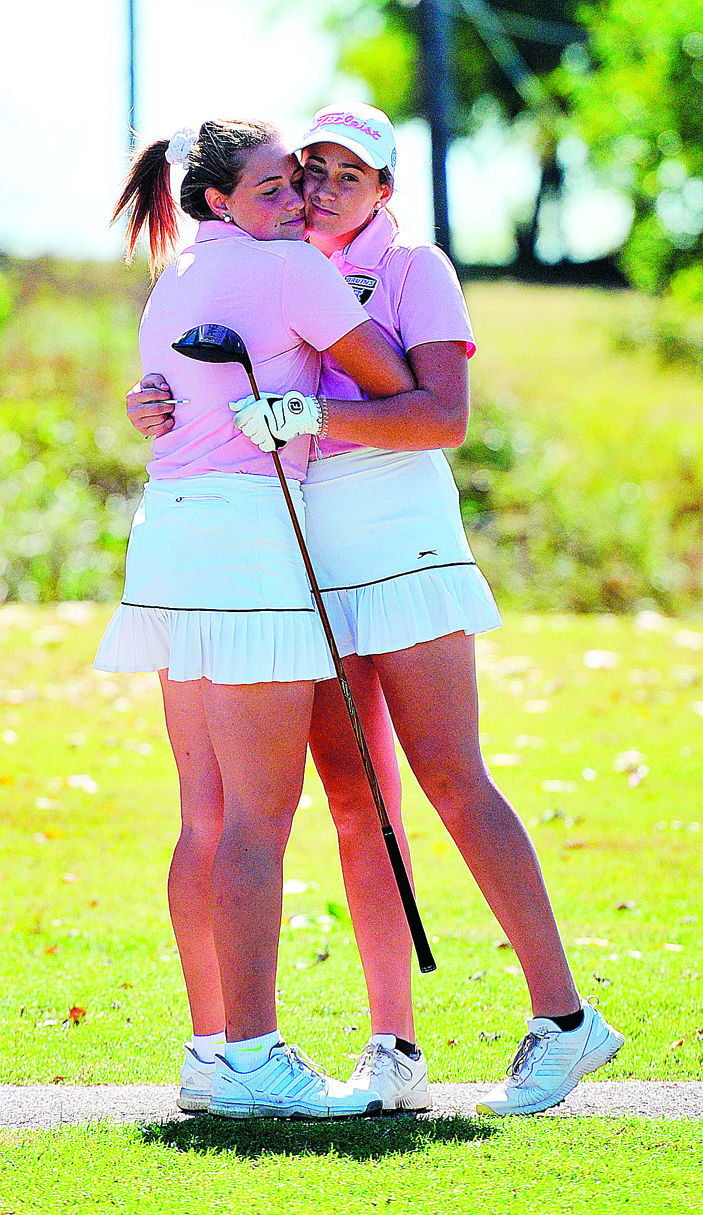 Central Hardin’s Paige, left, and Katie Gray give each other a hug before they tee off Monday at the KHSAA State Tournament at Bowling Green Country Club. The sisters made the individual cut and will play today’s second round. Katie Gray shot 84 and Paige Gray 88.

Central Hardin’s Paige, left, and Katie Gray give each other a hug before they tee off Monday at the KHSAA State Tournament at Bowling Green Country Club. The sisters made the individual cut and will play today’s second round. Katie Gray shot 84 and Paige Gray 88.

BOWLING GREEN — It wasn’t always pretty, but North Hardin sits in third place after the first round of the KHSAA Leachmen Girls’ State Golf Tournament.

The Lady Trojans are at 51-over par, one shot ahead of Marshall County and Sacred Heart Academy.

Lexington Christian Academy leads the way at 25-over. It is 20 shots better than South Warren.

“They did well today,” North Hardin coach Eric Vowels said. “It was tough conditions, especially this morning when it was so wet. We finished well. If you would have told at the beginning of the day where we’d be, I think I would have been happy.

“We can improve tomorrow. There’s a few shots still out there. A couple of them came in a little higher than they wanted.”

She played the last three holes 4-over and shot 76, which puts her in fifth place.

“She did great,” Vowels said. “She doesn’t let it get to her.

Scherer bogeyed the first hole and followed that up with birdies on Nos. 3, 4 and 7. She bogeyed Nos. 9 and 11.

“She’ll come out and probably shoot as good or better tomorrow,” Vowels said.

Hailey Coleman shot 80, Holly Hale 89 and Gabrielle Childers and Riley Burks, the lone senior on the team, each shot 94. Coleman, Hale and Childers are sophomores.

“Riley’s gonna shoot better. She had a rough day,” Vowels said. “She been here before and is probably gonna shave 10 or 15 shots off her score.

“The other girls are gonna play as good or better than they did. I believe our team score will be a little better tomorrow.”

The Lady Trojans collectively had 20 holes of double bogey or worse.

“After every shot you have to figure out how to bounce back,” Vowels said.

Coleman bookended her day with a pair of sevens.

Catching Lexington Christian will be rather tough, considering it played three holes under par, two holes at par and three at 1-over on Tuesday.

The Lady Trojans played the third hole 2-under, the 13th and 16th holes at even and the fourth. sixth, eighth and 11th holes at 1-over.

“We’ve got nothing to lose, but I know ... especially I came out here stressed today and it showed,” said Coleman, who birdied three of the four par 3s. “Come out more relaxed tomorrow and know what you can do.”

Seniors Olivia Hensley (Boyd County) and Laney Frye (Lexington Christian) are tied for the lead at 3-under. Madison Central’s Mattie Neeley is in third place three shots back.

Central Hardin freshman Katie Gray shot 84 to make the cut. She tees off at 7 a.m. on the first hole.

Lady Bruins teammate Marlee Toothaker shot 90 and Meade County’s Mimi Honaker 99 and missed the individual cut, which was the low 42 players plus ties.