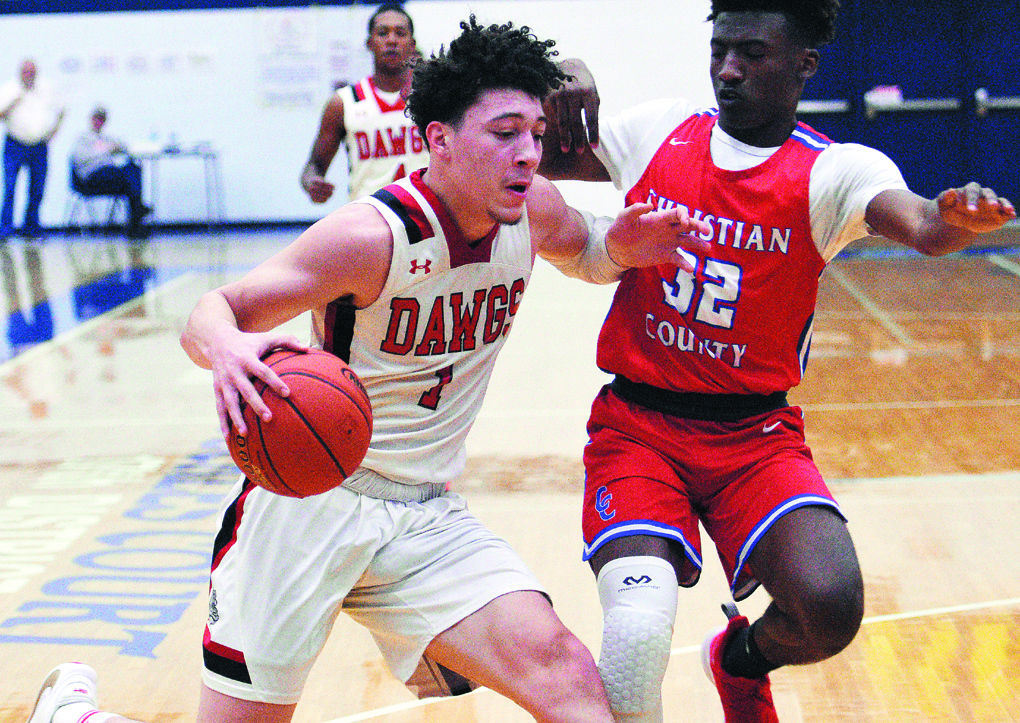 Friday night was a late one for John Hardin boys’ basketball. The team was in Marshall County for the Marshall County Hoopfest and did not take the court for its game against University Heights until midnight.

Back in action Saturday afternoon for the Kentucky Hall of Fame Classic, the Bulldogs didn’t miss a beat in a 72-29 victory over Christian County.

“I was very pleased. Christian County’s got a very good team,” Coach Jared McCurry said. “We didn’t get to sleep until close to three o’clock in the morning. I thought the first 30 seconds were a little slow and then we picked it up, so it shows our kids have mental toughness.”

The slower start to the first quarter saw the Bulldogs open with a 3-0 lead in the first minute-and-a-half, all from free throws. After the Colonels hit a two-pointer to make it 3-2, the game turned into the Bulldog show.

Less than two minutes later, John Hardin had a 10-point lead, which escalated to a 47-point win margin by the game’s end.

“I think this game we played very well. Passing the ball around good and I think we shot the ball very good,” senior guard Trevon Harris said. “In the locker room, Coach said we’ve gotta be mentally strong if we want to beat good teams and that’s what we came out and did.”

Harris played a large role in the win, with 17 points. Also impressive was the team’s offensive rebounding to keep the ball out of the hands of Christian County defenders.

Sophomore shooting guard Jalen Tyus was crucial for the Bulldogs’ lopsided victory with stellar three-point shooting. Four out of five of Tyus field goals came from beyond the arc, including two in the first quarter to help John Hardin break away early.

“My teammates, we started coming together and driving in and kicking out,” Tyus said of his three-pointer success. “That’s one thing we worked on in practice and Coach has told us that. I just let it flow.”

The win furthered the Bulldogs undefeated start to the season and was their largest win margin thus far. Through each of the team’s first three games, John Hardin’s win margins have increased each time.

“If we want to reach our goals, we’re gonna have to play at some difficult times and back-to-back,” McCurry said. “It’s good to find out where your team’s at mentally.”

Alex Matthews led the team in scoring with 19 points, followed by Harris’ 17. Tyus finished with 14 points, just ahead of Preston Murrell at 13.