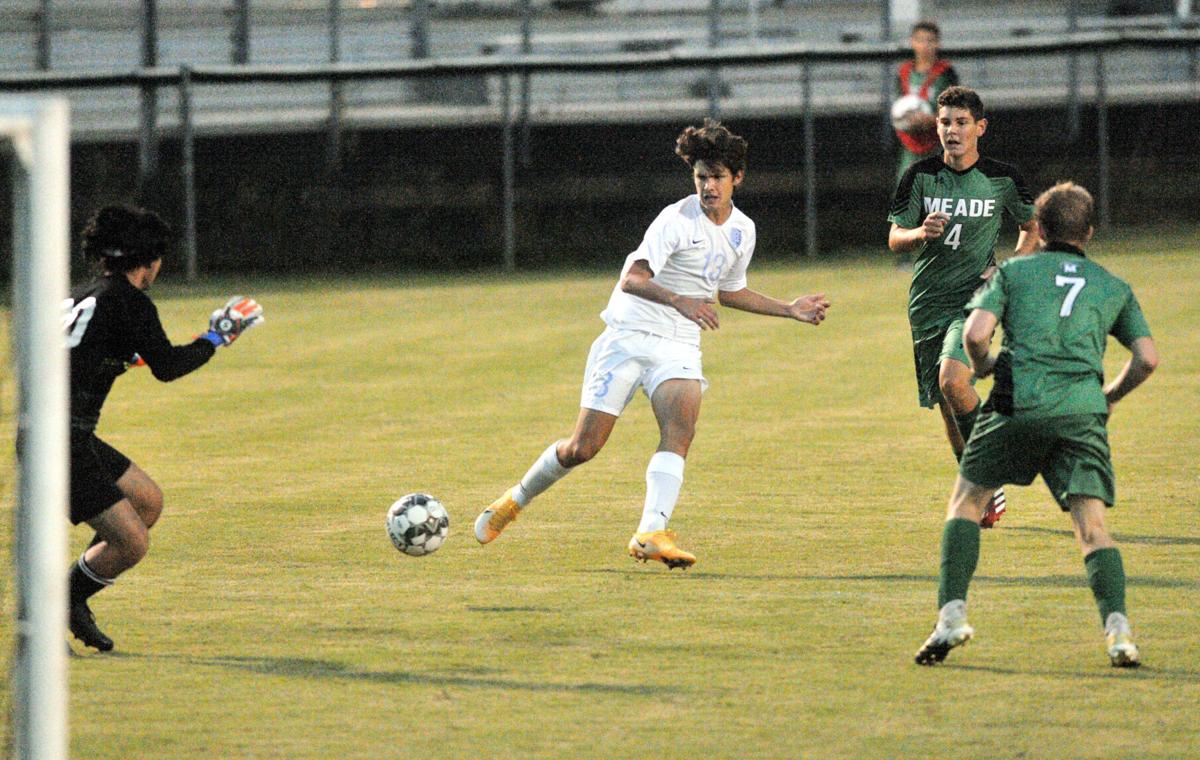 Central Hardin’s Micah Brown slips a shot past Meade County goalkeeper Kyler Chapman while Green Wave players Chase Smith (7) and Ethan Medley look on. The score gave the Bruins a 3-2 lead and they went on to win 6-2. 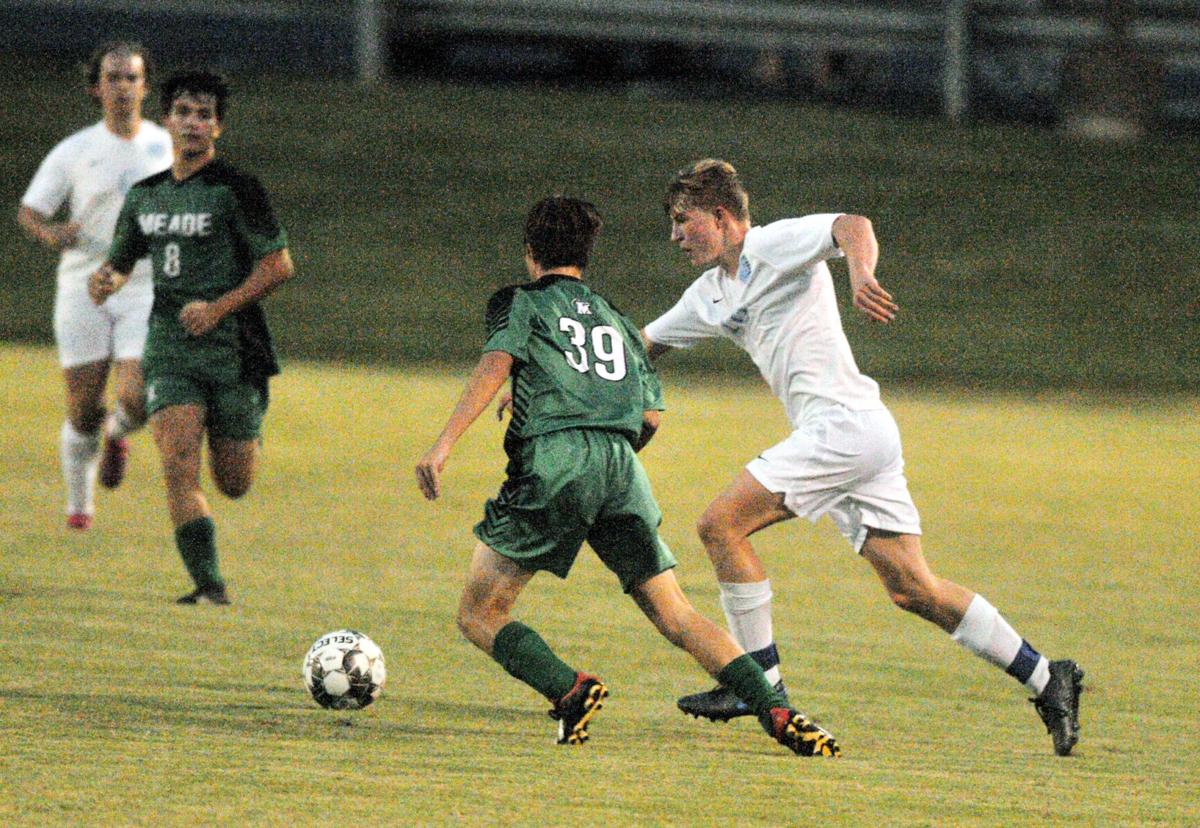 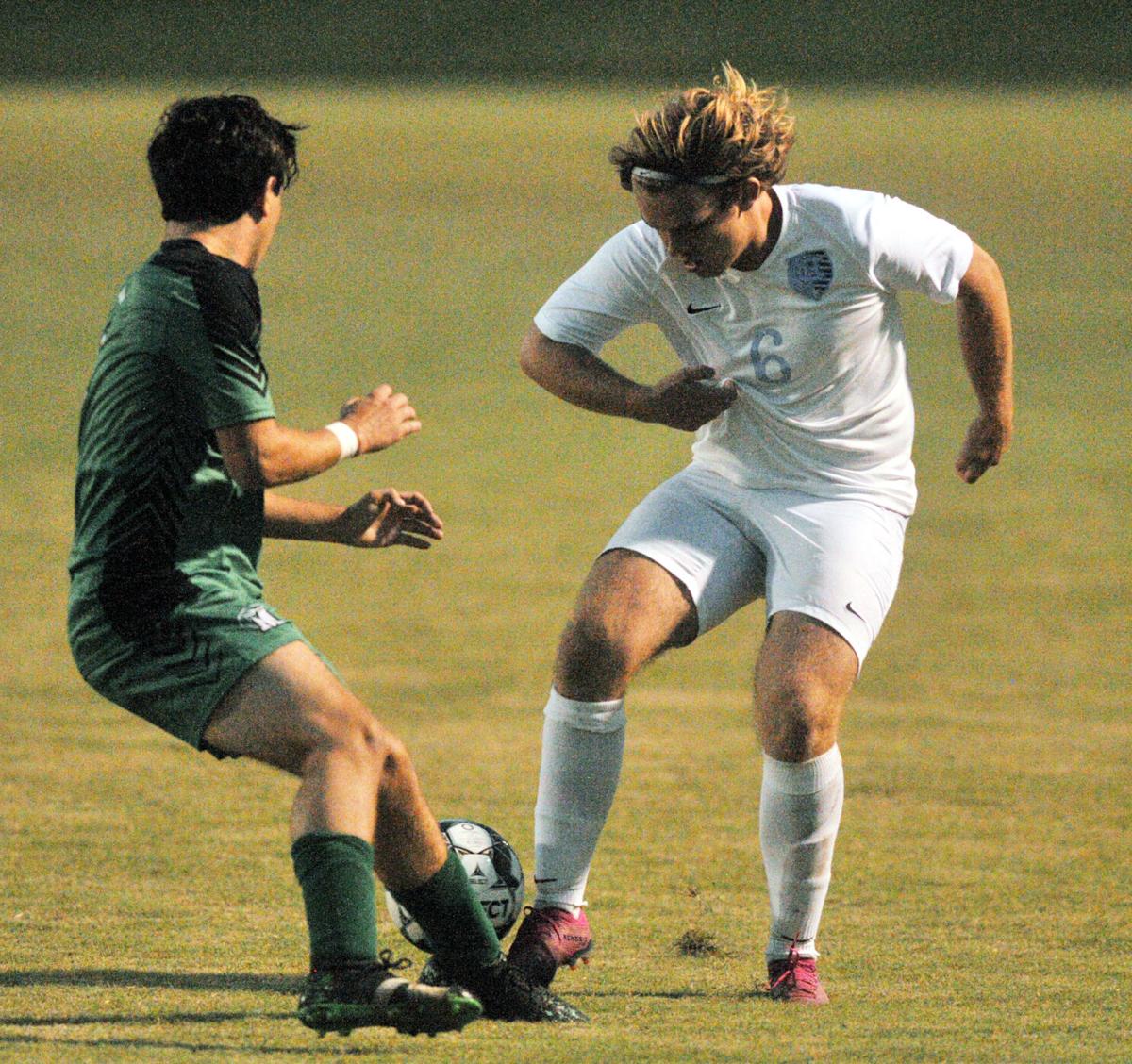 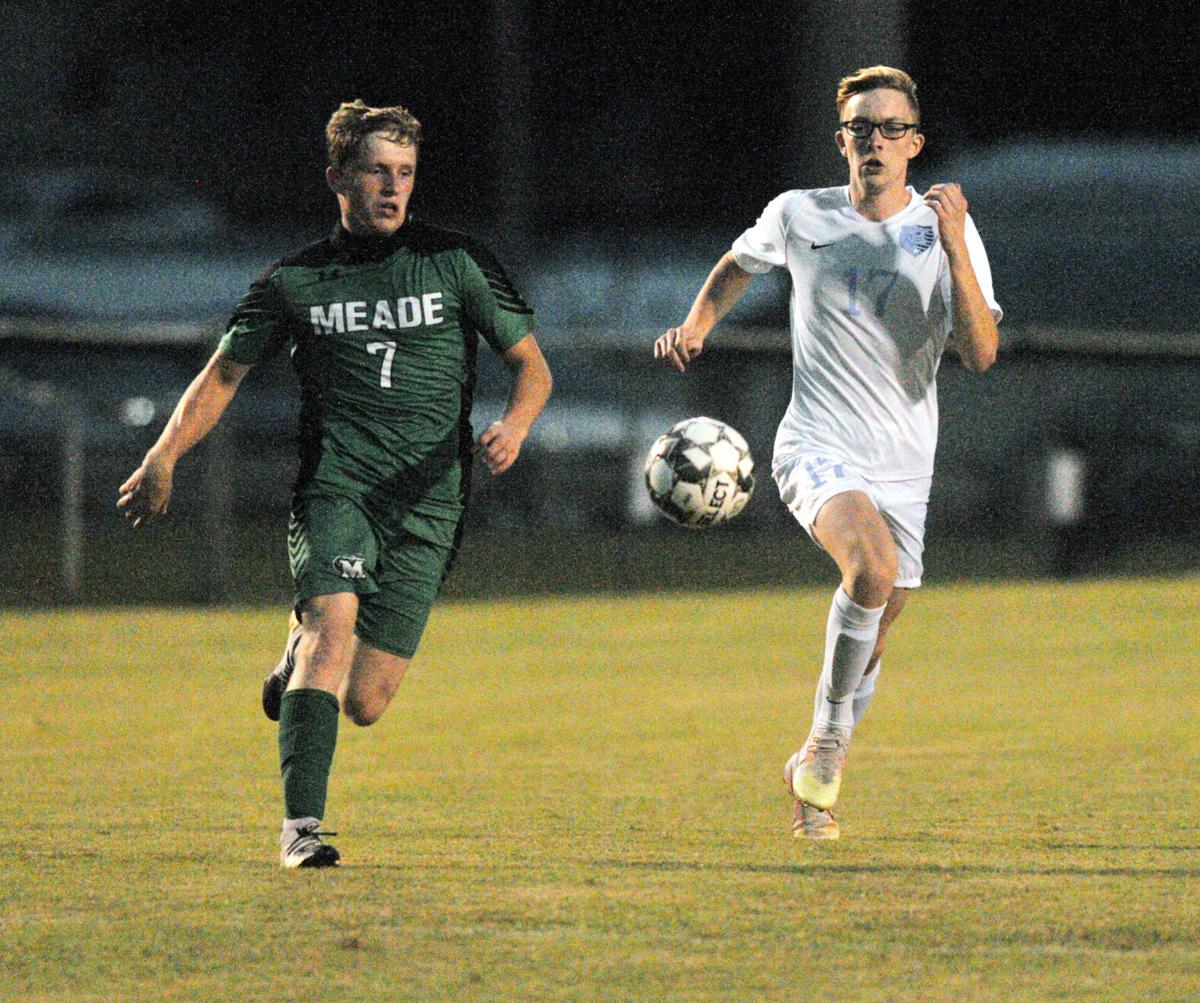 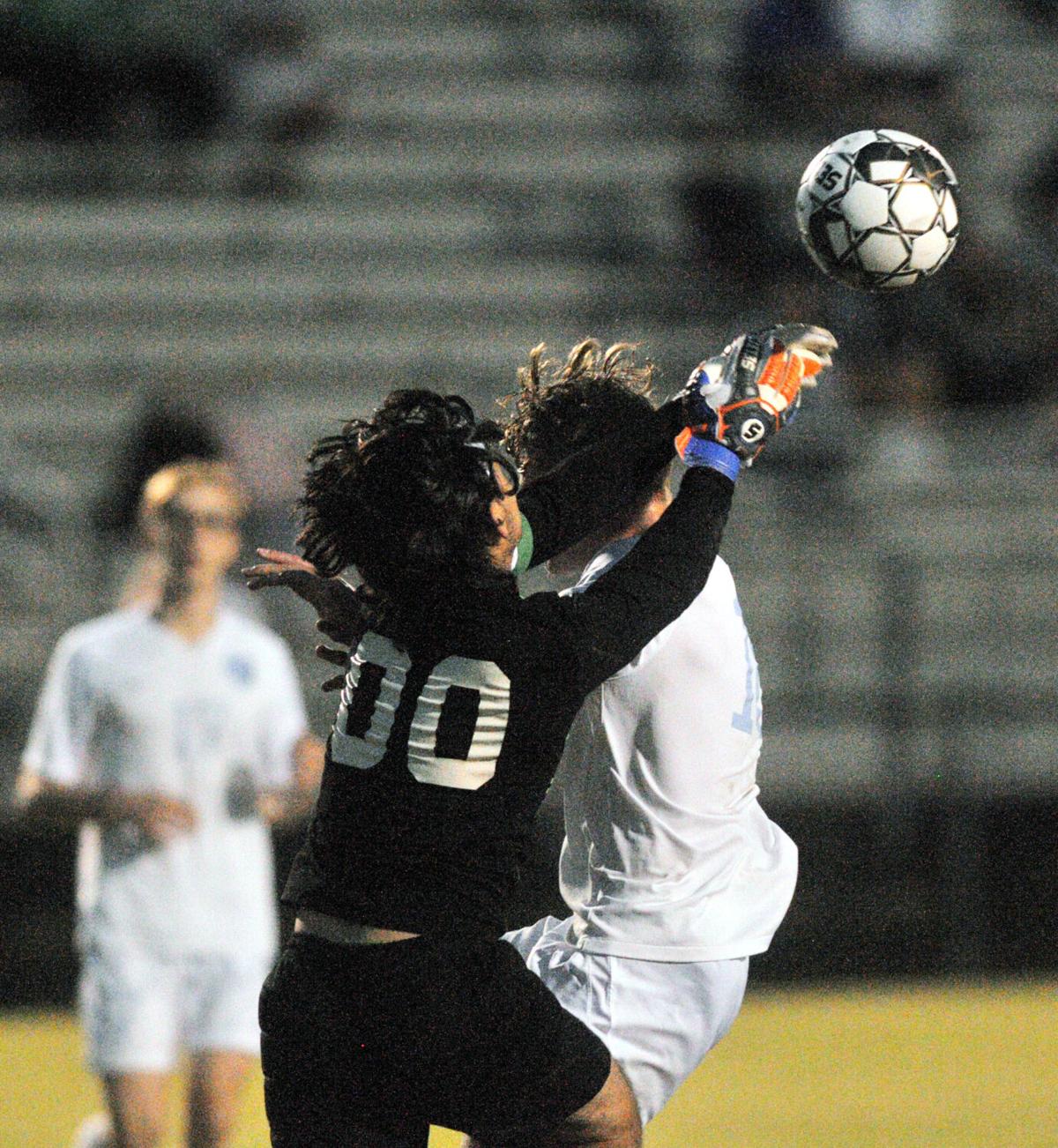 Central Hardin’s Micah Brown slips a shot past Meade County goalkeeper Kyler Chapman while Green Wave players Chase Smith (7) and Ethan Medley look on. The score gave the Bruins a 3-2 lead and they went on to win 6-2.

For Central Hardin and senior striker Dan Torres it’s all about leaving nothing in the tank.

“We do feel a little sense of urgency because we have to make sure the other teams know that we mean business,” he said. “We can’t be messing around and not bring enough energy to each game and not giving our all.

“We’ve done pretty good. We switched up our formation in the midst of it all. I feel like our team is strong. We have a lot of experience on our team. We have a lot of juniors that are stepping up that didn’t get a lot of varsity time last year.”

There was a vast experience level difference in Tuesday’s 6-2 Bruins victory at Meade County.

Central Hardin has 13 seniors, 11 more than the Green Wave.

“We’ve got young guys,” Meade County veteran coach Matt Pollock said. I’ve seen improvement. I knew it was going to be a pretty steep learning curve. I’m trying to be patient on that respect. They’re going to learn something every game and they’re learning throughout the game. You can see them make adjustments at halftime.

“We’re always going to be at a disadvantage in size and speed. We have to find ways to compensate for that. We have to play tougher, make smart decisions and do the small things well.”

It was 2-2 midway through the first half when the Bruins broke it open.

Junior Grayson Pollock had both goals for Meade County.

“I like the passion and the hunger,” first-year Central Hardin coach Austin Varela said. “They’ve come out every single game so far and have absolutely given their all. Even against a really tough team like McCracken County, we came out and showed out.”

Torres scored a pair of goals, the second with 9:22 left in the game to close the scoring. Jordan Allen scored and had a pair of assists for the winners. Hank Larkin also scored, while Brown, Emery and Benjamin Hobbs also had assists.

“Our coach mentions that we’re doing this for the seniors,” Torres said. “We have a captain in Welles Emery, who’s stepping up and leading the team from the back. All the seniors are definitely stepping up for sure, telling the juniors and sophomores how important it is for us to win the season and make it to state.”

While that seems like a long way off, it isn’t. District tournaments are a month away.

“I’m really loving what I see from the guys right now, especially going into our game against E’town,” Varela said of next Tuesday’s game at Central Hardin.

“It let’s you know where you are when you play a team like Central,” Pollock said. “It’s a really difficult thing when you’re thin on your roster, the hardest thing to replicate is that game play. I have to be really mindful to make sure I’m giving them enough pressure in practice to where we’re really trying to put them under that pressure and try to make them push each other and get after each other really hard without making it getting a little confrontational.