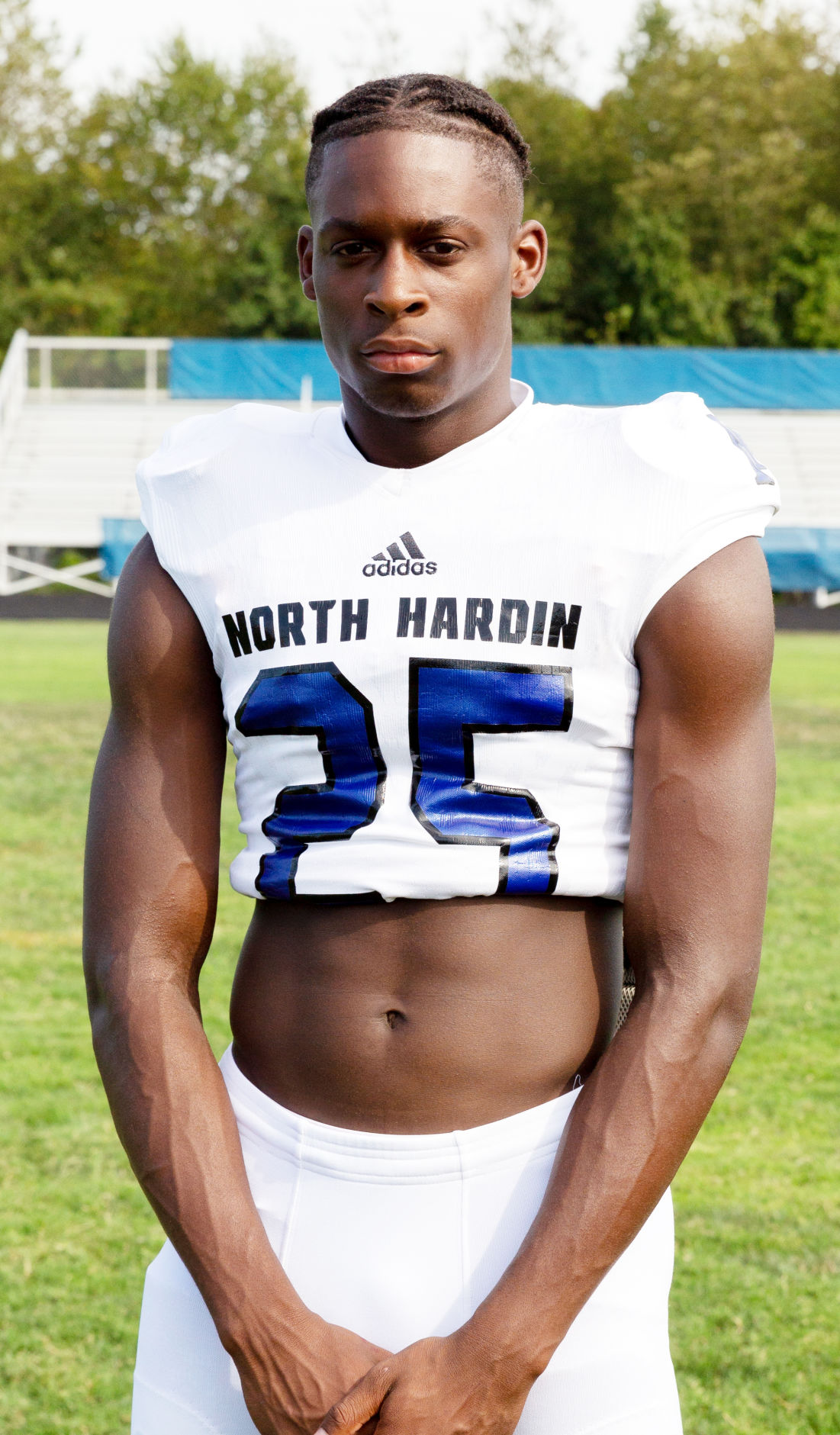 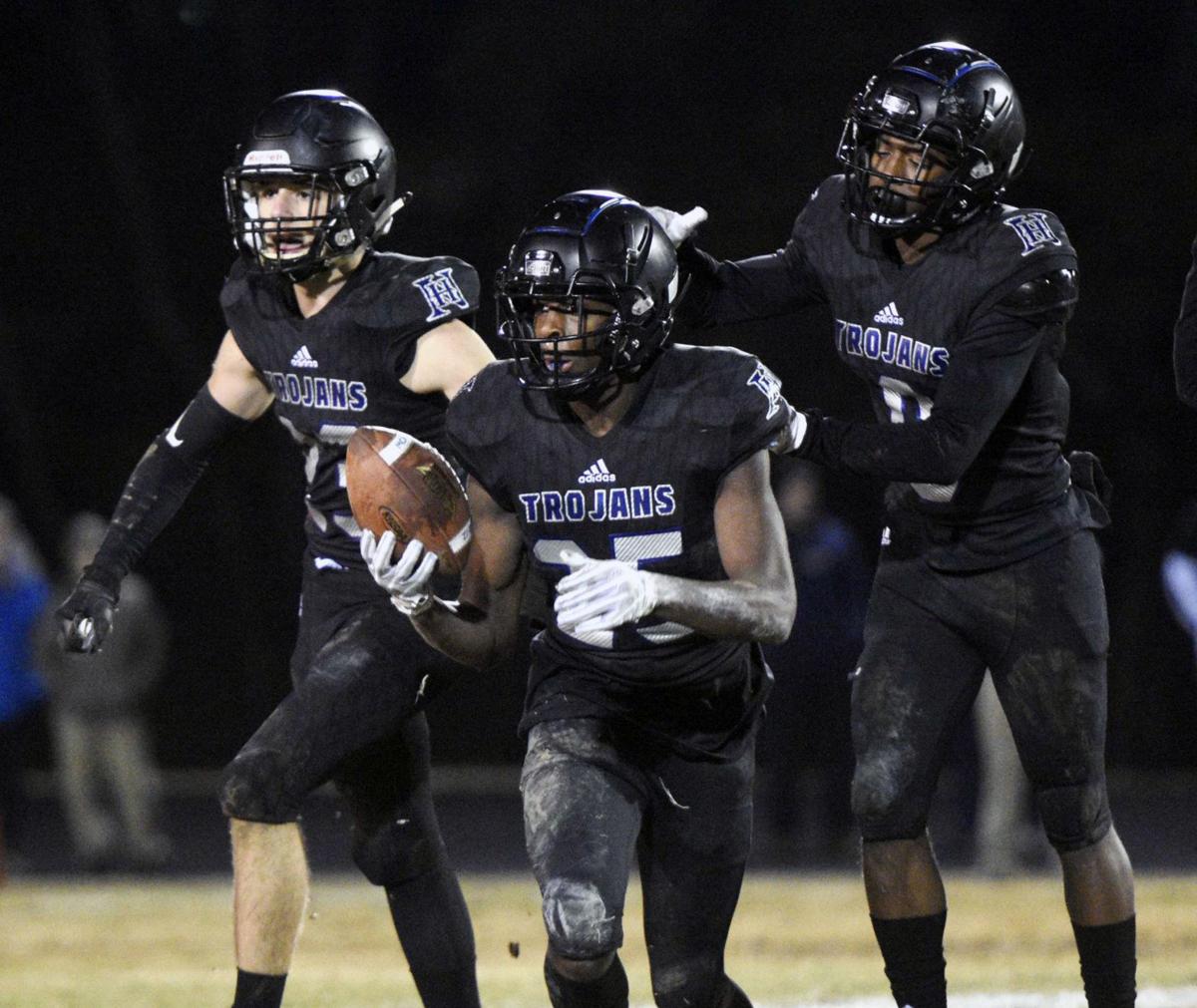 North Hardin’s Jordan Lovett is bracketed by teammates Eian Patry, left, and Devonte Lemafa after his state-leading 15th interception of the 2019 season during the Trojans’ Class 6-A quarterfinal 38-2 playoff win Friday, Nov. 22,over McCracken County at Ray Story Stadium. Lovett finished the season one interception away from a new state record.

North Hardin’s Jordan Lovett is bracketed by teammates Eian Patry, left, and Devonte Lemafa after his state-leading 15th interception of the 2019 season during the Trojans’ Class 6-A quarterfinal 38-2 playoff win Friday, Nov. 22,over McCracken County at Ray Story Stadium. Lovett finished the season one interception away from a new state record.

Jordan Lovett is trading in one shade of blue for another.

The North Hardin High School football rising senior announced his verbal commitment to continue his football career at the University of Kentucky earlier Wednesday. The Trojan defensive back made the an­nounce­­ment on a call-in to Kentucky Sports Radio.

“I feel like I’ve made a good decision,” Lovett said. “UK is a good place to spend three to four years, plus I feel like if I go there, my game will get expanded to the next level.”

Lovett had picked up 14 offers and narrowed the selection down to seven prior to Wednesday’s announcement, He chose the Wildcats over Louisville, Missouri, Cin­cin­nati, Boston College, West Virginia and Georgia Tech.

Lovett was attracted to Kentucky in part to the number of defensive backs in the program, as well as its proximity to home. At the end of the day, it was also just a matter of having the right feeling about the program.

“I felt like I was more comfortable with Kentucky’s environment than, like, all the other schools that I visited,” Lovett said of his decision process.

Prior to the 2019 season, Lovett had not spent much time on defense and was primarily a wide receiver. The switch to free safety last spring resulted in the junior picking up 15 interceptions by the season’s close. This was one pick shy of a state record.

While Lovett just missed the state individual record, his effort played a major role in a record-breaking team interception count, with 38 total for the Trojans. This defensive effort, along with an impressive offense, carried North Hardin to a 13-1 record in 2019, with the team’s only loss coming in the Class 6-A state semifinals at home to Louisville Trinity.

Thompson reiterated Lovett’s thoughts on the decision-making process and how Lovett instinctively felt like it was the right place for him.

“Jordan really weighed back-and-forth on a couple things and he went back-and-forth. There were several schools that were in the mix for him and as he came down to it, he continued to really like the way these (UK) coaches talked to him and I think the relationship and honesty they gave him was probably the key,” Thompson said. “One thing we always talk about is family. These young men are the epitome of that and that’s one thing they try to do. They’re pretty close. Any time you go in to play the game of football, the guys become brothers and that’s something we really try to reiterate to them and they took it over the top and obviously (Oxendine, Wright and Lovett) are three gifted young men that obviously will get to play at the next level.”

Lovett explained he plans to work on getting bigger and faster when he joins the Wildcats next year. Academically, his goal is to get a 4.0 GPA and major in either kinesiology or physical education.

From a teamwide perspective, he made clear he wants to help to bring a conference championship back to Lexington. There also was one SEC East opponent that stood out as a bucket-list victory.

“I want to win the SEC championship,” Lovett said. “And beat Georgia really.”

Currently, there is some uncertainty as to when teams can return to the football field because of the ongoing COVID-19 pandemic. When it’s safe to return to practice, Lovett said the goal for himself and his teammates this season is to run it back and try to make another run for a title in 2020.

“Shoot for the same thing we shot for last year. A state championship,” Lovett said. “We want that ring.”