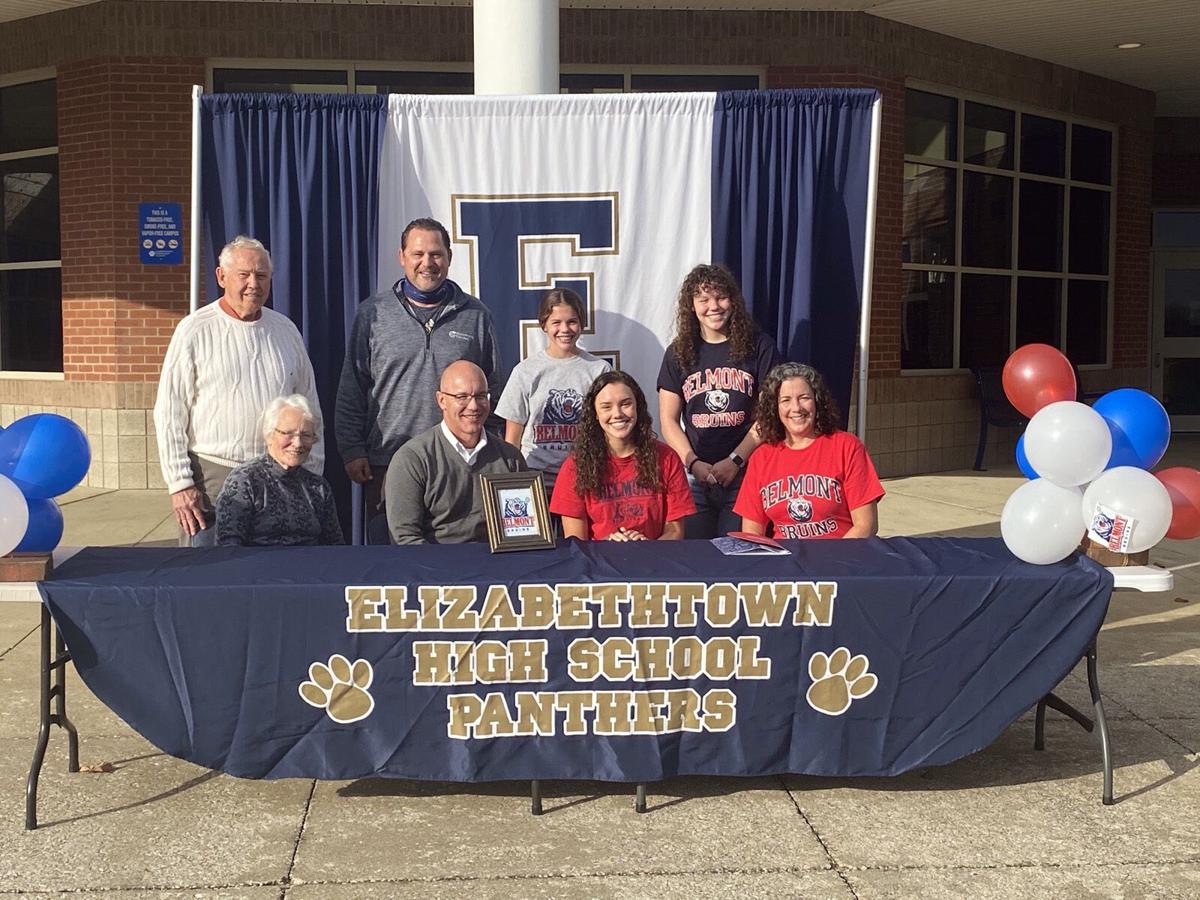 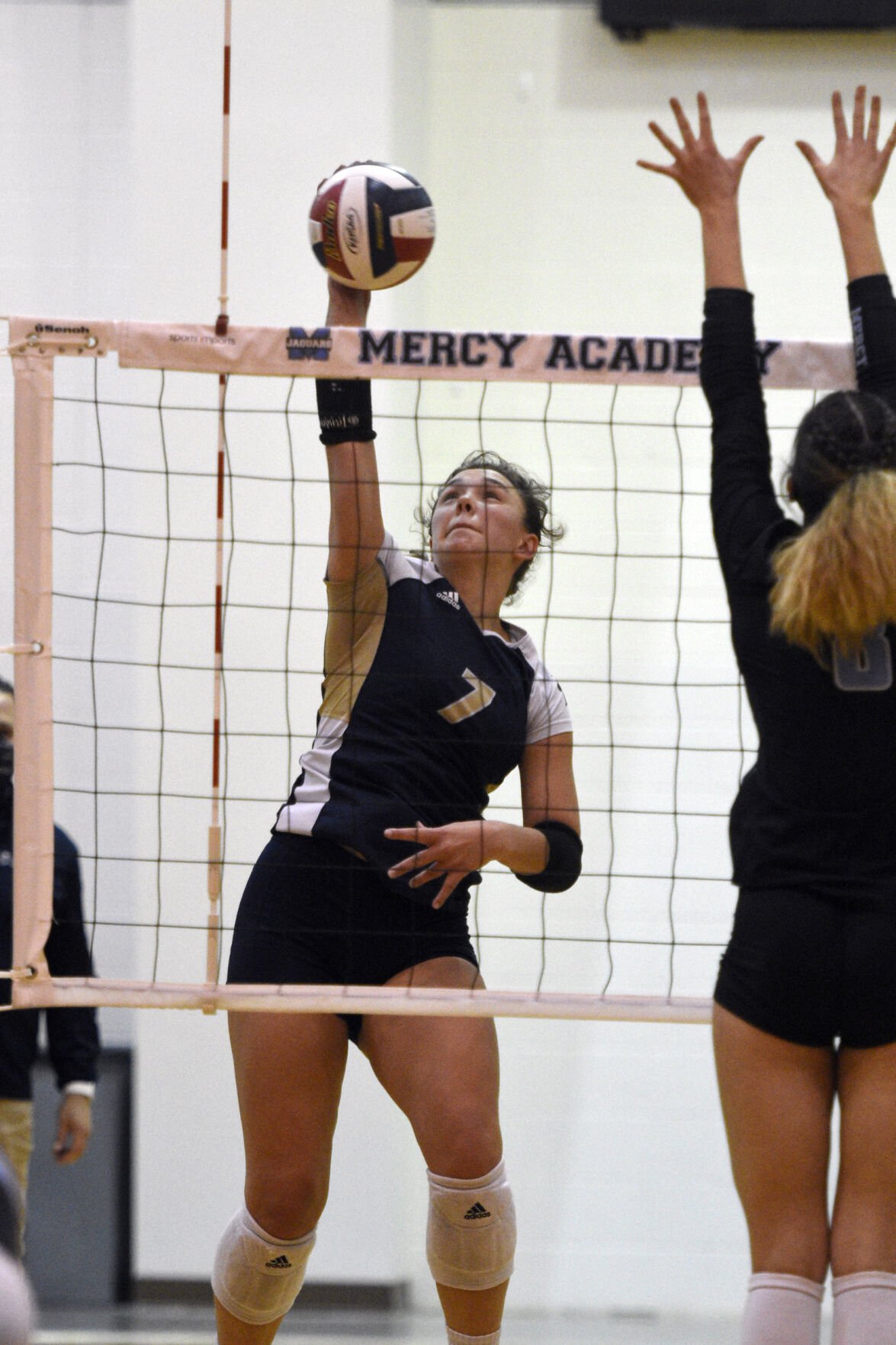 Elizabeth Godfrey prepares to send a shot over the net during the Lady Panthers’ state tournament opener against Mercy.

Elizabeth Godfrey prepares to send a shot over the net during the Lady Panthers’ state tournament opener against Mercy.

Playing for Elizabethtown High School, Eliza­beth Godfrey has been on the court for plenty of volleyball matches against district foe Central Hardin over the years. Now she’s becoming a Bruin herself, albeit at a different school.

The Lady Panther senior outside hitter signed her letter of intent Wednesday to continue her athletic and academic careers at Belmont Uni­versity in Nashville.

Godfrey had been verbally committed to the Bruins program since her junior season. The official signing to play at the collegiate level brought to life what had been a dream for Godfrey since she began playing club volleyball in Louisville as a seventh grader.

“I’m just really grateful and thankful that I’ve had this opportunity and I’ve had the opportunity to play for (Elizabethtown coach Bart Catlett). He gave me a bunch of connections up in Louis­ville and so through that, I was able to go to travel tournaments and get viewed by coaches and go to some camps and stuff,” Godfrey said. “I’m just really thankful that it all eventually worked out in my favor.”

Godfrey finished her senior season for the Lady Panthers with 260 digs and 57 service aces to lead both categories. She also recorded 250 kills, which was second only to junior M.E. Hargan’s 397 on the year.

Prior to Elizabethtown’s Nov. 2 loss to Mercy Academy in the first round of the state tournament, Godfrey also was named Second-Team All-State.

In addition to the talent she’s demonstrated over the years, Catlett said Godfrey’s attitude also would make her a great asset for Belmont moving forward.

“At the college level, coaches recruit great teammates as much as they do great players and Elizabeth, she could write a book on being a great teammate,” he said. “She’s very energetic, she’s very happy for her teammates when they do something well, she lets them know that. If things are going bad, she’s the first one to say ‘Hey, we’ve got this. My bad, I’ll make a better pass’, or ‘I’ll take a better swing.’”

The Bruins play in the NCAA Division I Ohio Valley Conference and are coached by Katelyn Harrison.

Godfrey said she was interested in the school because of its location, as well as the campus. For the volleyball program specifically, one of the main factors in this decision was the friendly and inviting atmosphere that encompassed it.

“It’s right next to Nash­ville, so I really love that there’s always gonna be something to do and you’ll never be bored and the campus is absolutely gorgeous,” Godfrey said of Belmont. “I went down there for a camp the summer after my sophomore year and I really got to know the team and the players and the coaches. They were all super welcoming, so fun to talk to and so easy to talk to. I just knew that was where I would want to go.”

Regarding academics, Godfrey said she is still deciding, but is leaning toward going down the pre-health path. If she commits to this plan, she hopes to study physical therapy or possibly attend medical school.

Her main goal for volleyball was to continue growing her game.

Godfrey was thankful to her family and coaches at the high school and club levels for helping her get to this point. She also was thankful to everyone in Louisville who trained with her over the years to help her advance to the college game.