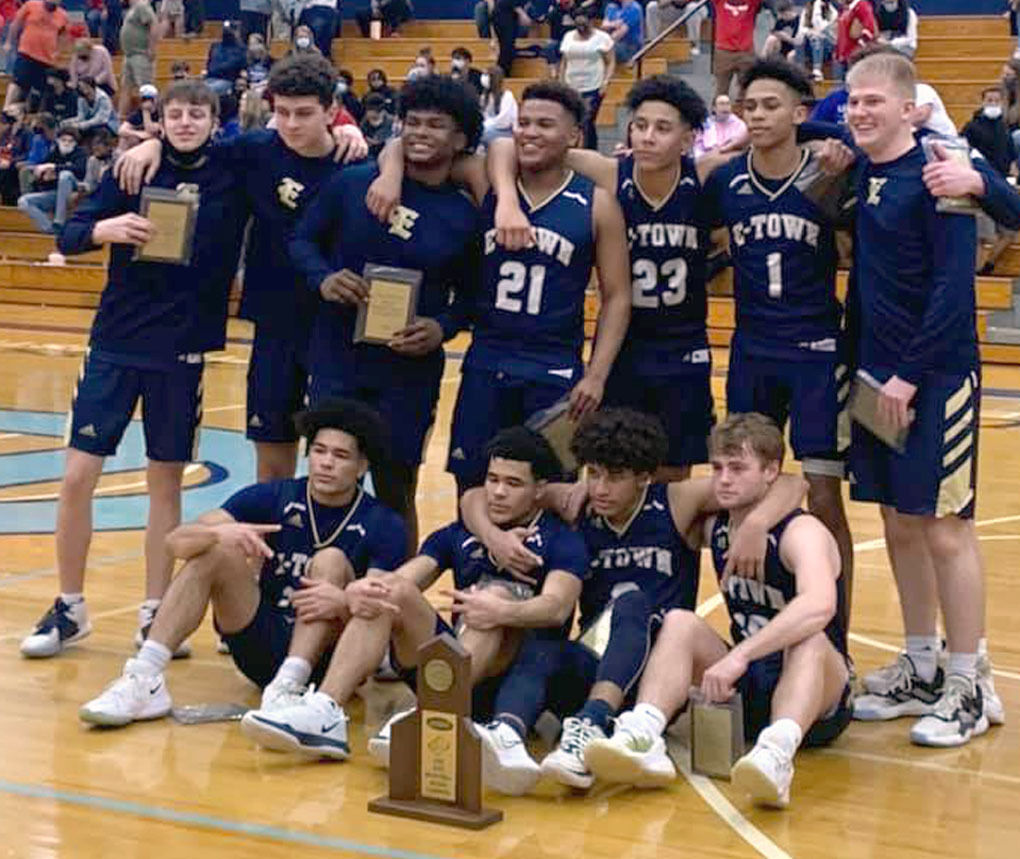 Several members of the Elizabethtown Panthers senior class, including Clay Games who has missed the season due to surgery, were in the same kindergarten class.

Several members of the Elizabethtown Panthers senior class, including Clay Games who has missed the season due to surgery, were in the same kindergarten class.

Little did the smiling faces in that photograph know it then, but one day many of them would be a big part of one of the most successful senior classes in the storied history of their high school, and Haire would be their coach.

In the photo, there’s Camran McNeil and Clay Games. There’s Camden Williams and Kam and Khia Sherrard. All in the same kindergarten class at Helmwood Heights Elementary School.

Williams and the twins start on an Elizabethtown team that enters today’s state tournament with a 19-2 record, as the 5th Region champions meet 14th Region Tournament winner Knott County Central, 18-7, at 11 a.m. at Rupp Arena.

McNeil is a reserve on the team and Games has been sidelined all season by shoulder surgery as he prepares for college football next season.

There are nine seniors in the Panther program, all home-grown through the district’s elementary schools to T.K. Stone Middle School and now into a final few months of high school.

The starting lineup is made up of five seniors, who also helped lead the Panthers to the Class 3-A state championship football game in December with Games, a Mr. Football finalist, as the team’s quarterback.

There’s a bond and trust between the players, and coaches, that only time and friendship can create.

If you play sports long enough, you would be lucky to be part of something that is so much bigger than just playing on a team. You’re part of a family on the field of play, and more importantly, when the games are a mere memory.

In a time when players, and parents, try and hand pick the most ideal situation and transfer from one school to another, the heart of this Elizabethtown team began with front teeth missing and youthful giggles.

“It’s a brotherhood, we’re always together,” Williams said. “If we’re out in public and if you see one of us, you’re probably going to see all of us.”

“So many kids are moving for various reasons,” Haire said. “They don’t like the coach or they think they’re better off playing somewhere else or you don’t run the right offense. But this group right here, they stuck it out.

“They all stayed and when they got to me, they had to adjust,” Haire said. “I have to be honest, I didn’t think a couple of them would make it. They changed and I’ve changed some, too.”

For Haire, part of his give-in to the team has come this year.

“Like their hair. I know that you need to let kids have their own expression, but the hairstyle, I just don’t understand it,” he said, referring to many of the Panthers letting their hair grow longer this season. “As kids get older, you become a little more lenient anyway. I still don’t understand it though.”

And then there are the times when you meet someone early in your life and a friendship is bonded.

Khia Sherrard remembers meeting Williams, for instance, at Helmwood, and other current seniors when he and his brother attended Morningside Elementary School.

“We all were in class together and we grew up playing together and competing against each other,” he said. “I’ve been best friends with them as long as I can remember, playing on the playground with them. I remember all of it.”

Murphy said he heard about the Sherrards when he was in elementary school and never realized that his mother, and their mother, were friends.

“We played football against each other and a few days after one of our games, we went over to their house and we’ve been friends ever since,” he said.

Franklin didn’t begin his schooling in Elizabethtown Independent Schools, but entered the district in the fourth grade.

“I remember every one of them coming to our little league program and coming to our camp,” Haire said of his players. “I remember coach (Tim) Mudd telling me when he was teaching at Helmwood, ‘you’ve got to come watch this one kid. He does things with a basketball that I’ve never seen a kid that age do.”

Mudd was talking about Franklin.

“I didn’t go over there, but I did see him at camp that summer,” Haire said.

As the kids played together in elementary school, in middle school where they reached the state semifinals in the seventh and eighth grades, as well as AAU, it became clear there was something special about this group.

They were talented. Playing for the E’town Elite travel team, Williams said in two years they went “60-something and two.”

“Jaquias coming over, that really helped us a lot, knowing the kind of player that he is,” Williams said. “We were already good and he just made us better.”

There have been adjustments to make and tough times.

Playing time for some had to wait, or never happened as much as they would have liked.

Still, being part of something special meant more than personal accolades.

“The most rewarding thing with this is about 80 percent of these kids have been with us from the ground on up. Jaquias came in the fourth grade and most of the rest, they’ve been together since kindergarten or the first or second grade,” Haire said. “.... It’s so unique to see that they’re still together, after all of this time.”

If ever a team deserved to be playing today on the state’s biggest, highest basketball stage, it’s this team. They were robbed of last year’s opportunity to step onto the Rupp Arena floor due to COVID-19 and the tournament being called off.

With a target on their back as the team to beat since last season ended, they excelled with the high expectations.

“It’s been great. We wouldn’t want to do it with any other group of guys,’’ Khia Sherrard said. “We just love each other and want the best for each other and to see everybody succeed. We’ve dreamed about this since we started playing together.”

Jeff D’Alessio can be reached at 270-505-1404 or jdalessio@thenewsenterprise.com