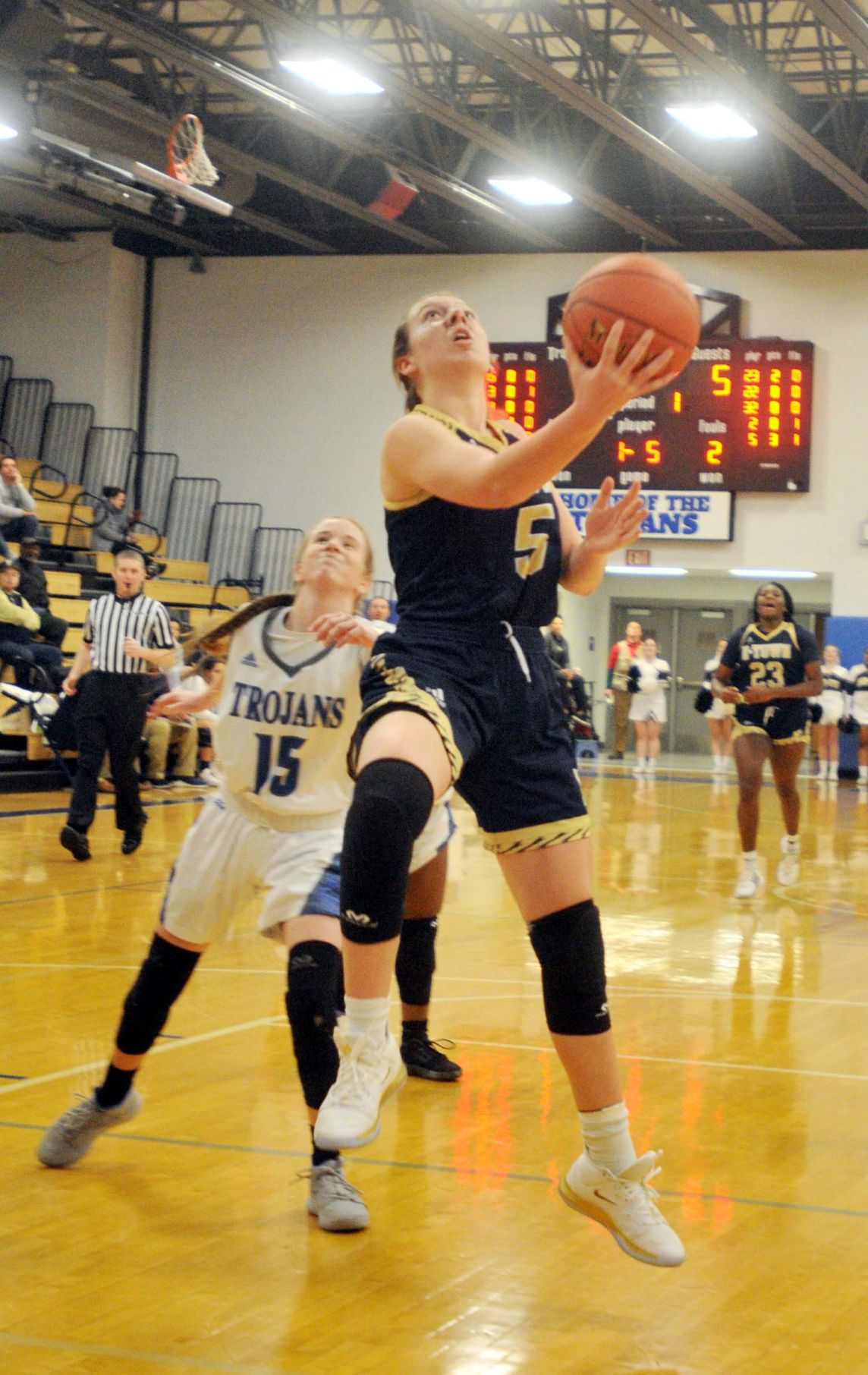 Elizabethtown’s Whitney Hay goes in for a reverse layup in front of North Hardin’s Ella Scherer during the first quarter of Monday’s 17th District game inisde Ron Bevars Gymnasium. Hay scored a game-high 28 points as the Lady Panthers escaped with a 60-56 victory. 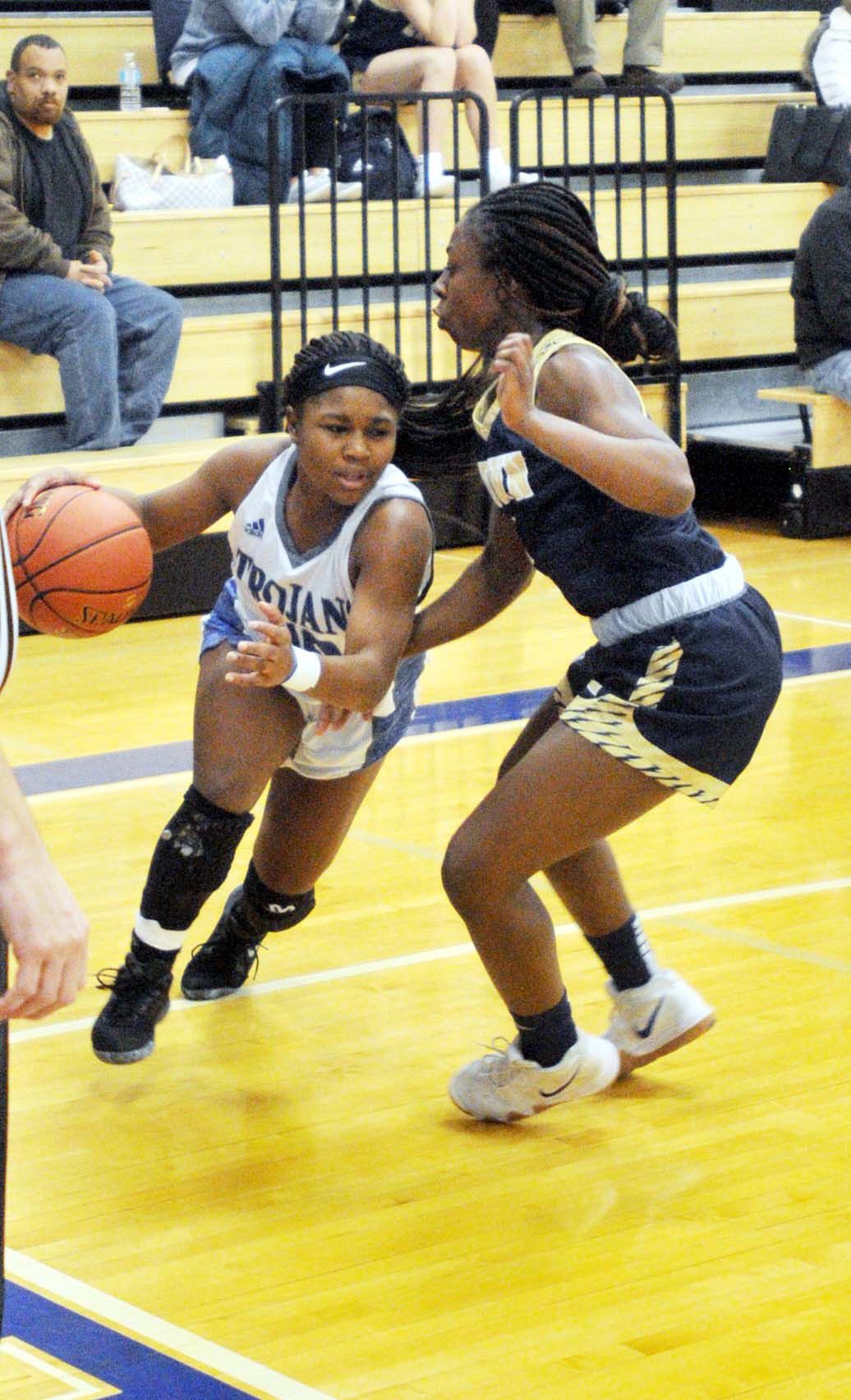 Elizabethtown’s Whitney Hay goes in for a reverse layup in front of North Hardin’s Ella Scherer during the first quarter of Monday’s 17th District game inisde Ron Bevars Gymnasium. Hay scored a game-high 28 points as the Lady Panthers escaped with a 60-56 victory.

That came on the heels of the Lady Panthers’ 60-56 victory over 17th District foe North Hardin Monday evening inside the Ron Bevars Gymnasium.

“What I told them in there tonight, I could not have been more proud of them if they had beaten them by 40 because they showed some toughness,” Swiney said. “We have been dealt a sour hand today. We couldn’t catch a break in the game. But they kept fighting and they kept fighting.

“Give North Hardin credit, they’re not gonna back down. They just keep playing and playing and playing. It doesn’t matter if (Addison) Sutton is dribbling the ball up the floor or standing wide open on the wing, she can hit it and she did. You have to give them credit for finding her and give her credit because she still has to make the shot. She made a lot of big shots for them.”

Sutton finished with 24 points, including five 3s, the final one that went through as the buzzer sounded.

“Jadeta (Gregory) and Dez (Bryant) did a great job in the second half, especially of settling down and getting themselves into position where they could make those passes (to Sutton),” North Hardin coach Whitney Hooper said. “Sometimes we got ourselves too deep or in the wrong position where we couldn’t makes those passes because we were going away from her.

“We tried to get our offense going in her direction, so when we had those openings we found them. Credit to her (Sutton) because there wasn’t a lot of space. She got her feet set and knocked them down.”

“I just told myself I need to go out and have more fun,” said Hay, who finished with a game-high 28 points, including 12-for-14 from the line. “I know I’ve said that a lot, but I really haven’t been doing that, putting it into action. I’ve really been working on my shot a lot over the weekend. I knew I just needed more confidence. I just had to stay resilient when I was missing. That’s the key. I know how good of a shooter I am and percentage-wise it will fix itself if I just keep shooting and forget about the misses.”

Elizabethtown’s Kenzie Franklin grabbed an offensive rebound on Hay’s miss and was fouled. She went to the line and missed, but Lady Panthers seventh-grader Leah Macy grabbed the rebound and was tied up for a jump ball that remained with the visitors.

Kayra Freeman received the inbounds pass and was fouled. She canned both charity tosses for a 58-53 lead with 16.1 seconds showing.

Macy grabbed a North Hardin missed shot, was fouled and sank both free throws with 4.5 seconds showing for a 60-53 lead.

“I’m really proud of her,” Hay said of Macy. “I’ve been telling multiple people for a long time that she deserves minutes on the varsity because she’s that kind of player. The thing that sticks out most to me about her and Xavi (Smalley) being so young is their confidence. They have no problem going into a varsity game and feeling like they belong. That’s just amazing because when I was their age, I did not have that. I was scared to death. And they might be scared to death, but they definitely don’t show it.”

Macy was 4-for-4 from the line in the fourth period and spent her time defensively guarding Sutton.

“She played some huge minutes and did a pretty good job on Sutton in the fourth quarter,” Swiney said. “To go get that rebound, be strong through the foul, step up and hit those free throws — that’s big time, especially for a seventh-grader.

“We can only play against the ones who show up,” Hooper said. “Even though they obviously lost some height, they’re still pretty darn big inside. I still feel like we’re undersized in there.”

“I liked our chemistry tonight, but I also liked our response,” Hooper said. “There were times when everything didn’t go pretty. People weren’t getting frustrated with each other. I think that helped us when we were down eight going into the fourth quarter. When things weren’t necessarily going our way, we were able to settle and keep finding those things that were going well.”

“I think we settled down and relaxed. We made some adjustments offensively,” Hooper said of the 44-point second half. “We got ourselves out of some places that were just not good. We put ourselves dead out of water a couple times offensively. We rotated better defensively.”