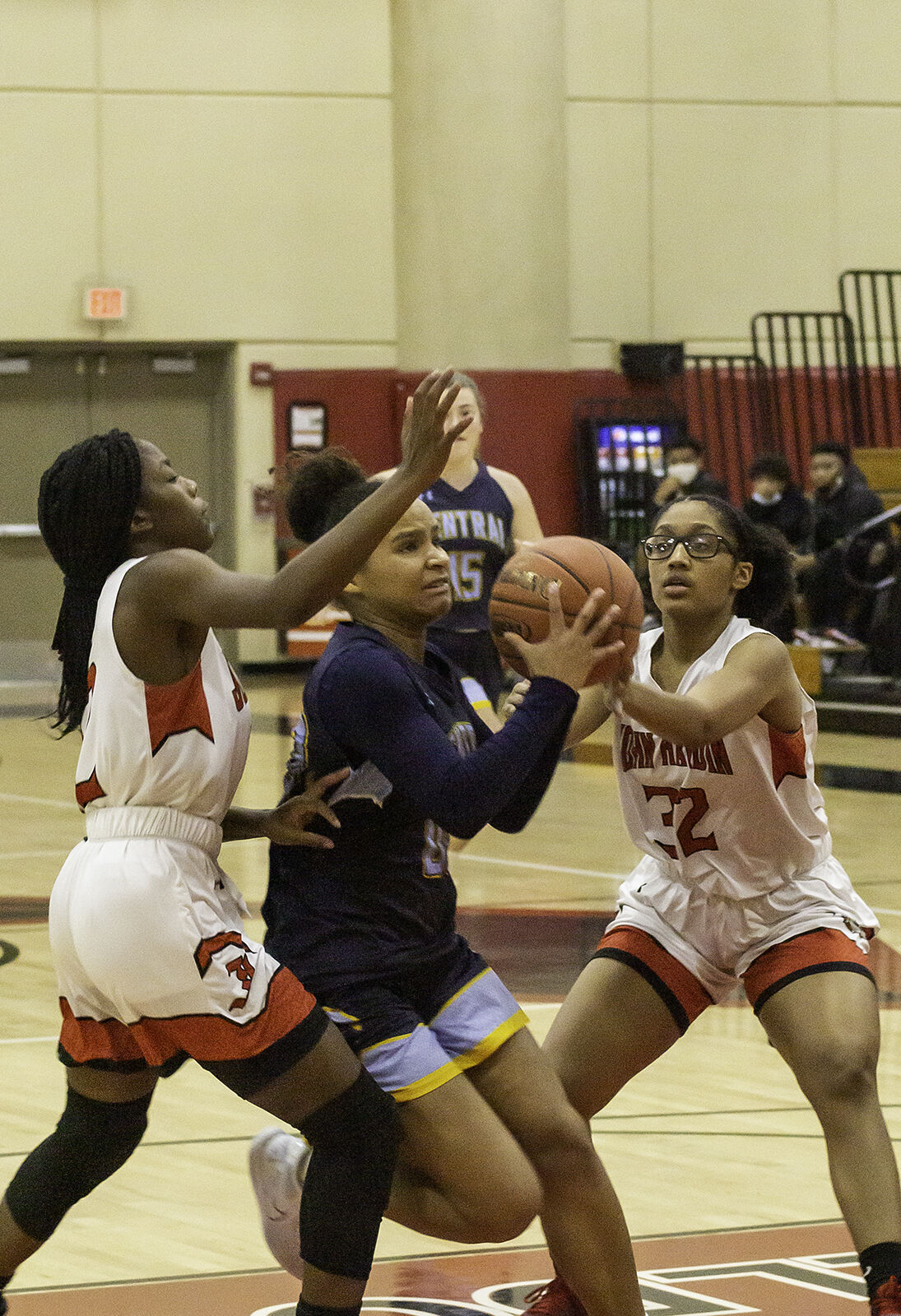 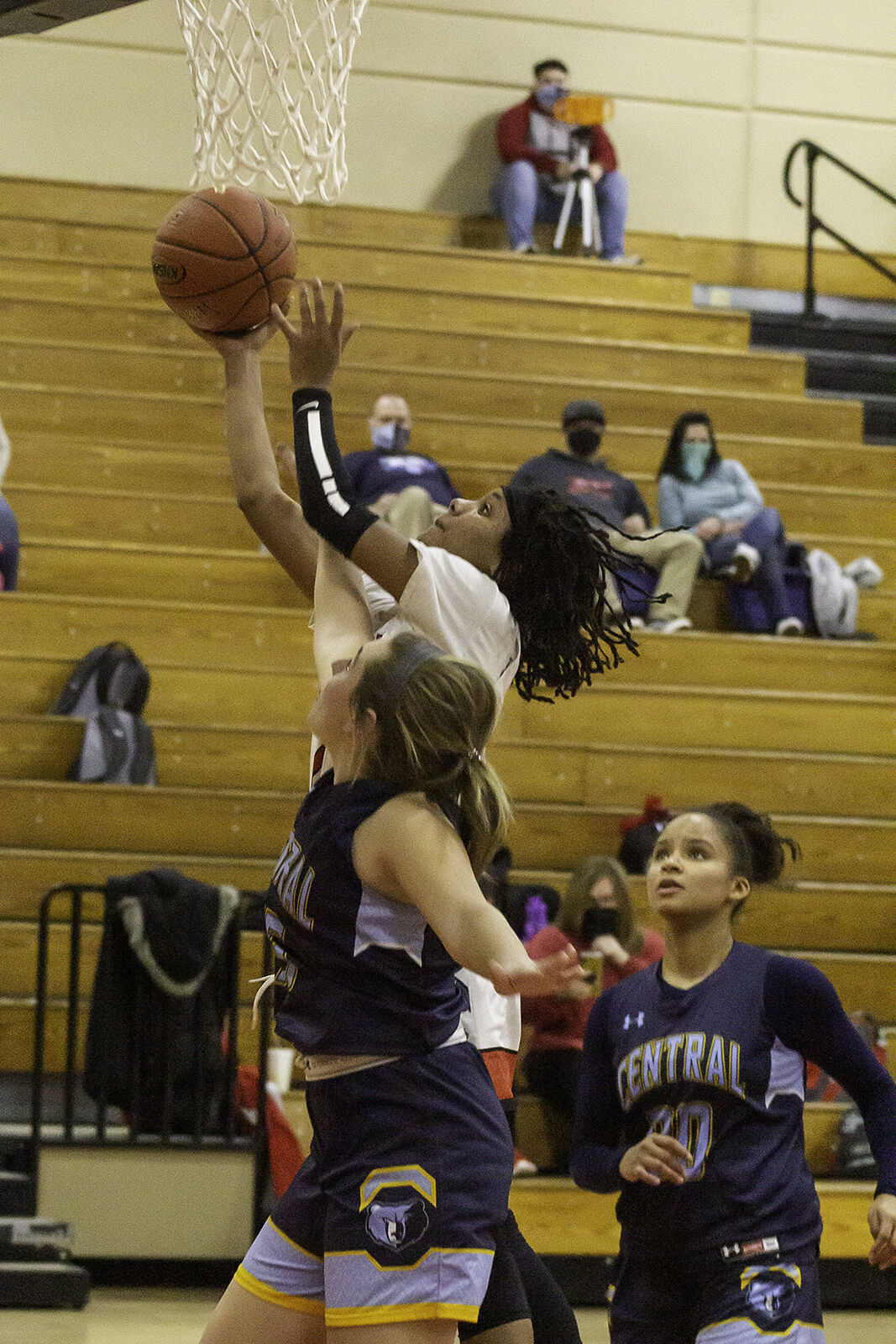 John Hardin freshman guard Destini McAllister is fouled Monday by Central Hardin senior forward Paige Gray on a layup that she made in the team’s first game of the season at John Hardin High School. GINA CLEAR/The News-Enterprise

John Hardin freshman guard Destini McAllister is fouled Monday by Central Hardin senior forward Paige Gray on a layup that she made in the team’s first game of the season at John Hardin High School. GINA CLEAR/The News-Enterprise

It was a tale of two halves Monday night at Bulldog Gymnasium.

For 16 minutes, the John Hardin girls’ basketball team gave Central Hardin its best shot in the season opener for both teams.

Then came the second half.

The Lady Bruins used a 21-8 third-quarter outburst to break a halftime tie and cruised to a 62-46 victory in the 17th District contest.

“It took a good yelling by coach at halftime to get us going,” said Central Hardin junior guard Monica Lindsey, who led the team with 19 points. “That was what we needed.”

Lindsey said coach Kristina Covington-Jones emphasized this could be the last game for the team because of the unknowns of the corornavirus. And the first two quarters weren’t going to define the team’s season.

“She (coach Covington-Jones) said do you want to be remembered by how you played in the first half?” Lindsey said. “Or do you want to show everyone what kind of team you are in the second half?”

The Lady Bruins opted for the latter, hounding John Hardin into 14 turnovers over the final two periods to turn a 27-27 game into a runaway.

“I think we were just so anxious to play basketball that we lost our focus for awhile,” said Covington-Jones. “It took awhile to take in the things that make up a game.

“The ball is moving, the opponent is running plays, the referees are making calls,” Covington-Jones added. “Once we settled in we showed we can get the job done.”

All it took was a burst out of the gates to start the third quarter.

With 20 seconds gone in the half, Alyssa Lindsey, who finished with 16 points, hit a bank shot to put the Lady Bruins up 29-27.

Paige Gray followed by grabbing the rebound on the Lady Bulldogs’ next possession, then sprinting the floor to take a pass from Monica Lindsey to drop in a layup.

Mallory Reed drained a 10-footer and Alyssa Lindsey answered with a fastbreak layup off a turnover to make it 35-27 at the 6:15 mark and force John Hardin coach Nicole Coleman to call timeout.

The Lady Bulldogs followed with a 4-0 run on buckets by Destini McAllister and Jayden Young to cut the deficit to 35-31, but Central Hardin answered with a 13-4 run over the final 3:55, scoring seven points off three turnovers to open a double-digit lead.

“Turnovers have been our Achilles heel since last year,” said Coleman, whose team had 24 turnovers for the game. “It’s something we address after every game. It’s something we go over looking at film. We somehow have to get everything we say and they see to carry over to the floor.”

Despite the miscues, Coleman was proud of the way the Lady Bulldogs battled.

John Hardin rallied from a 9-2 deficit in the first quarter behind McAllister and Quiona Clay. McAllister scored seven of her team-high 18 points and Clay added three to spark a 10-0 run for a 12-9 advantage.

Clay started a 7-0 run by hitting a bank shot to end the quarter with a 16-14 lead, and Kristeen Kettlehake and McAllister scored the first five points of the second quarter for a 21-14 advantage.

The Lady Bruins rallied behind six points from Monica Lindsey and a 3-pointer by Dianna Hilbert to tie the game at halftime.

Central Hardin used a dominating defense to pull away in the second half, scoring 17 points off 14 turnovers.

“Defense is going to be our strength this year,” Monica Lindsey said. “We’re all fast and athletic, and we’re going to get in your grill. We are going to use that to our advantage.”