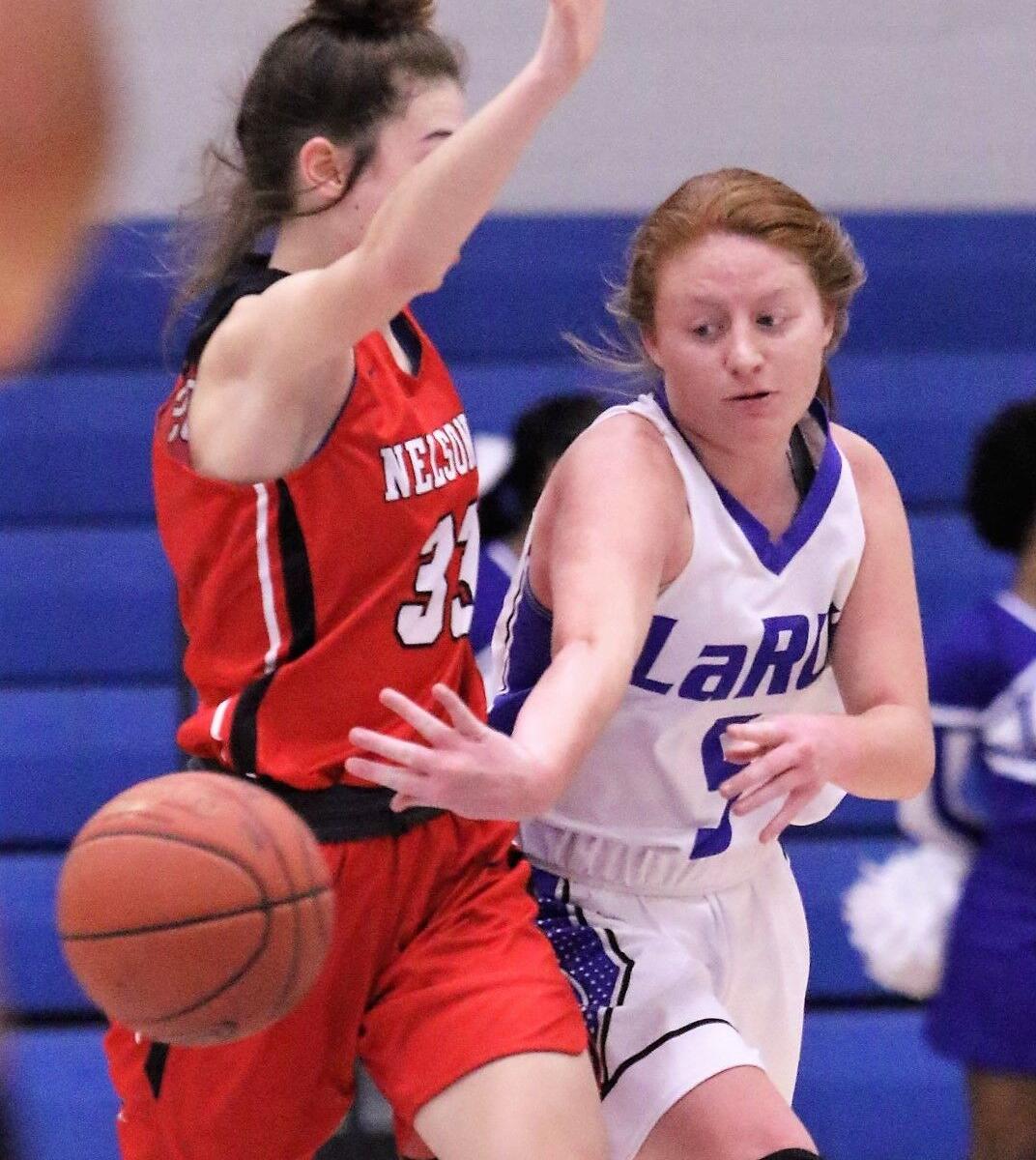 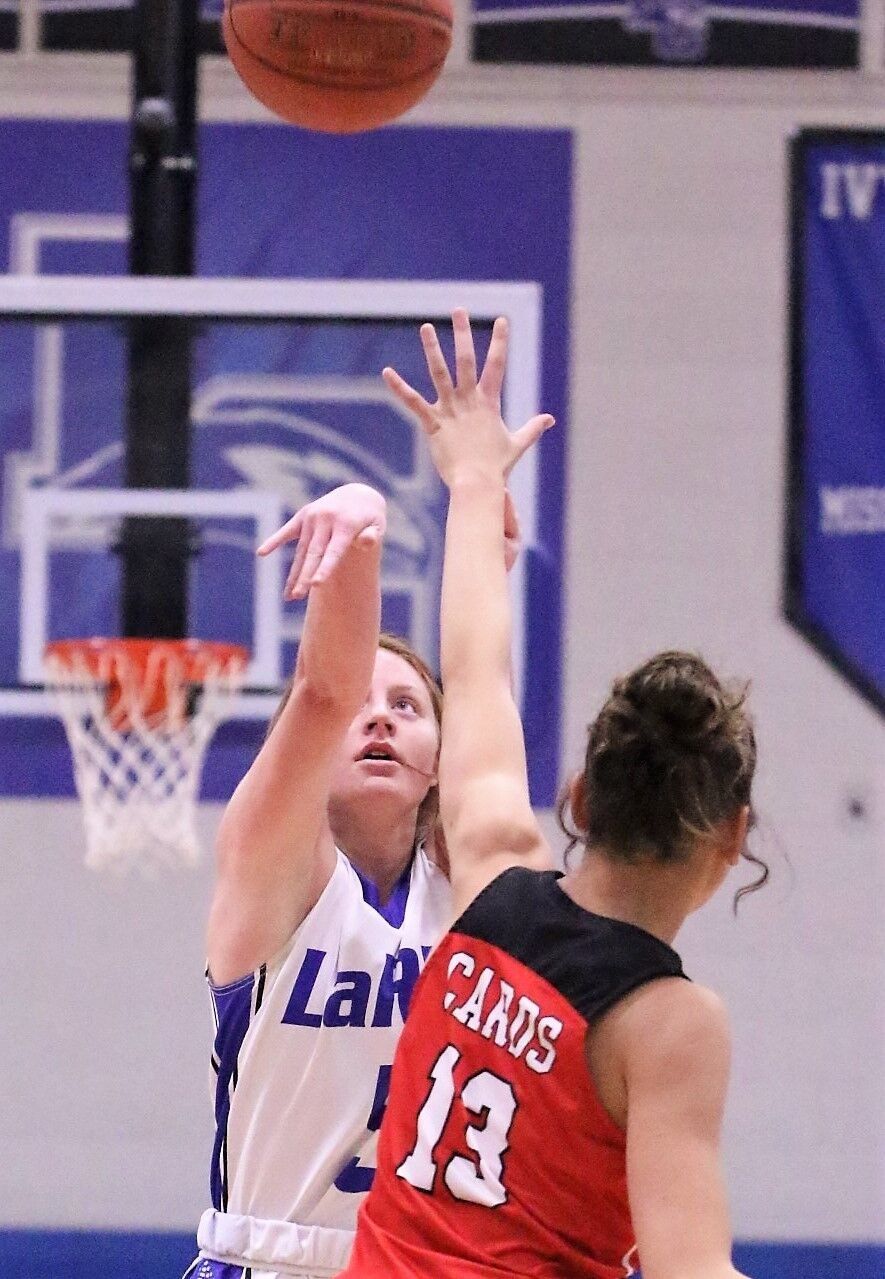 LaRue County’s Emma Moore has increased her scoring average by more than three points as a senior. Here, she shoots over a Nelson County defender Feb. 2.

LaRue County’s Emma Moore has increased her scoring average by more than three points as a senior. Here, she shoots over a Nelson County defender Feb. 2.

She grew up playing recreational league with many of her current teammates, like Katelyn Eads, Bella Thurman and Maleah English, and then moved onto middle school basketball. Now, the end of her playing career is measured in days, not in years.

“It’s been everything,” she said. “That was my life. Those teammates have grown up with me and that’s a part of my life that I will never forget. I’m so thankful to have played with them. LaRue County, it’s been everything to me.”

Moore is having her best season this year during a COVID-19 and weather impacted season.

But her value to the Lady Hawks, 3-8, is not measured statistically, first-year head coach Danielle Brown said. Instead, it’s in Moore’s ability to play and perform well in any position she’s put at.

“Emma has always been one of, if not the most, versatile player on our team,’’ Brown said. “Over her four years she has been asked to play every position at some point.’’

The 5-foot-5 Moore primarily had been a shooting guard, but that changed when senior point guard Bella Thurman was lost for the year with a knee injury and then junior Paige Evans missed some playing time.

Moore, 17, then was given the point guard duties.

“Being in the backcourt my role was just being a shooter and a passer, and of course I’d handle the ball here and there, but it wasn’t my main role,’’ she said. “... Stepping up into the point guard position and being that top person for my teammates, handling the ball and getting the plays set when they need to be set, it changed my role completely.’’

She had previously played some point guard throughout her career, she said, and that has helped in the transition.

“Honestly, my teammates help me,” said Moore, who will attend Western Kentucky University and study clinical psychology following graduation. “After I found out I was going to point guard, I was super nervous. I had prepared in practice and I’ve done drills and stuff where I’ve had to run the point guard. My teammates help and they really push me in practice. That really got me prepared for what I was about to do and face on the court.’’

Brown said she knew when Moore was shifted to point guard that she would take the role serious and give her best effort.

“The best thing about Emma is her personality and attitude,” Brown said. “She shows up every day ready to work, she watches film and will text me about things she sees. She keeps the girls loose but knows when it’s time to get serious. I think that’s been the biggest change in her this year, is her maturity and leadership.”

Moore, who has a 3.4 grade-point average, said her improved scoring and 3-point shooting is from a belief that she’s going to make shots.

“I’ve gained a little more confidence in my shot,’’ she said. “Before I would pass it up and let someone else shoot, but this year, I kind of have stepped up and taken the chances I’ve had.”

Brown said she has seen Moore become more comfortable and confident on the floor, as well.

“She has completely rose to the occasion,” she said. “I think her confidence has grown over the last two years and that’s why her scoring average has gone up. She’s shooting with the mentality that it’s going in.

”She’s always been the player that I could count on to do the dirty work, rebounding, assisting, diving for loose balls,” Brown added, “but this year she’s really stepped up as a senior leader and is leading her team.”