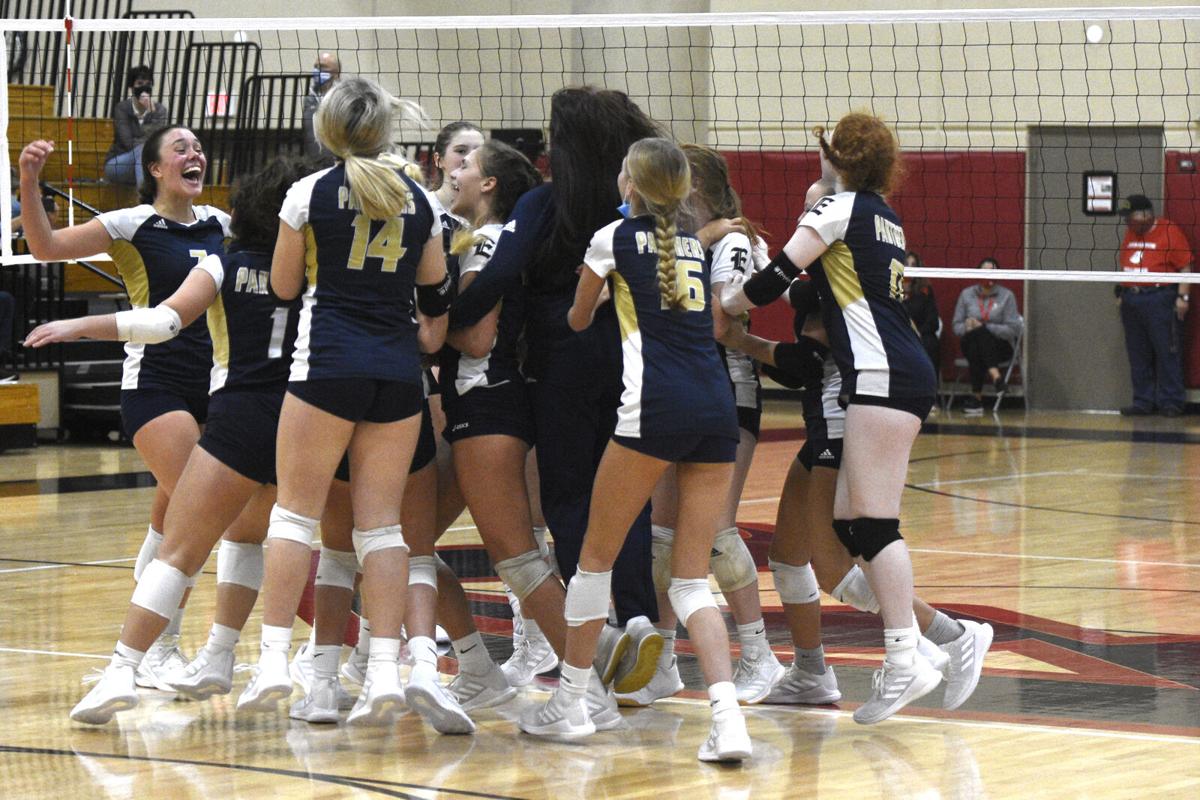 Members of the Elizabethtown volleyball team celebrate on the court immediately after winning the fifth set and defeating Central Hardin to win the 5th Region Tournament Thursday night at John Hardin High School. 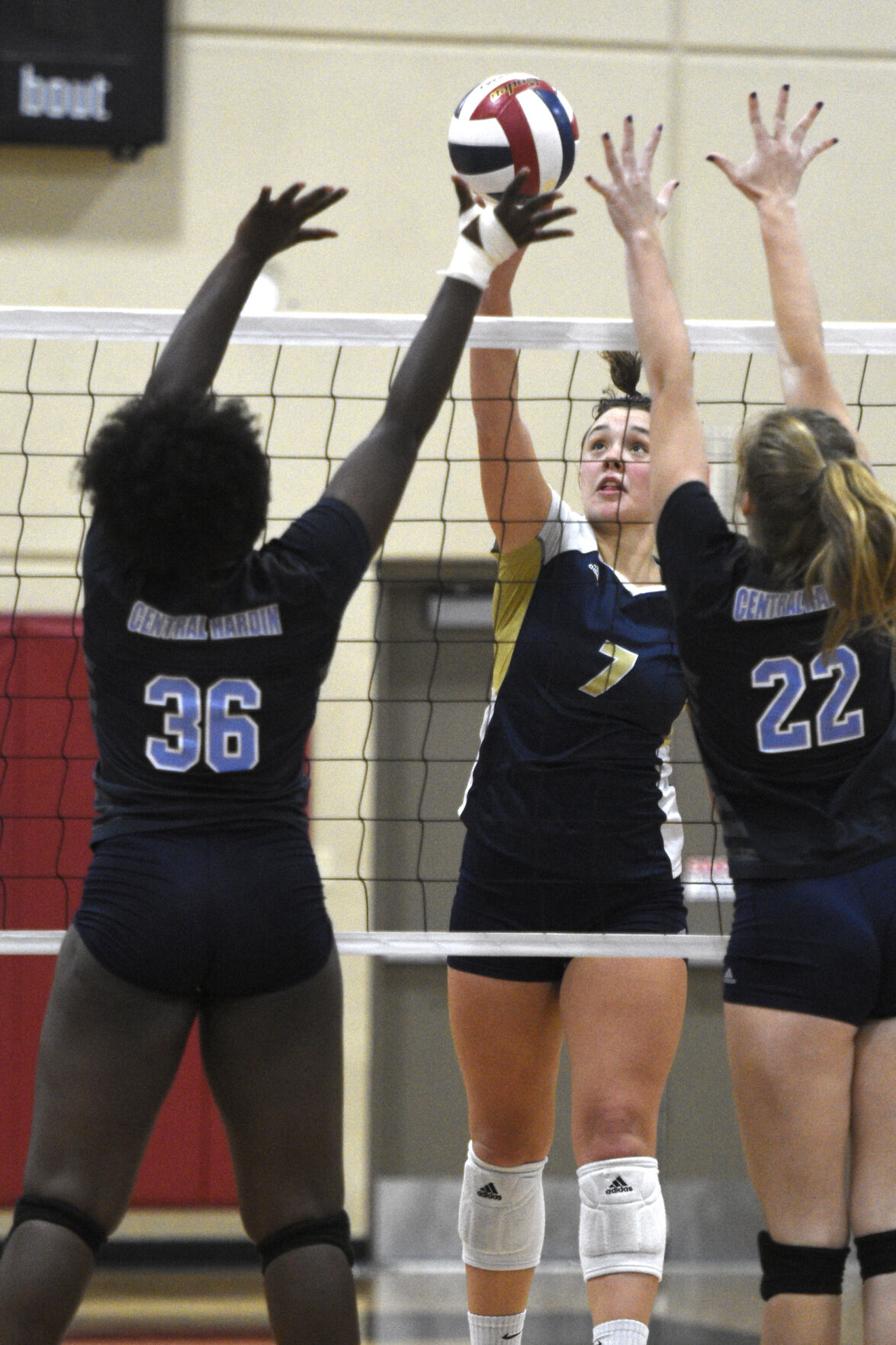 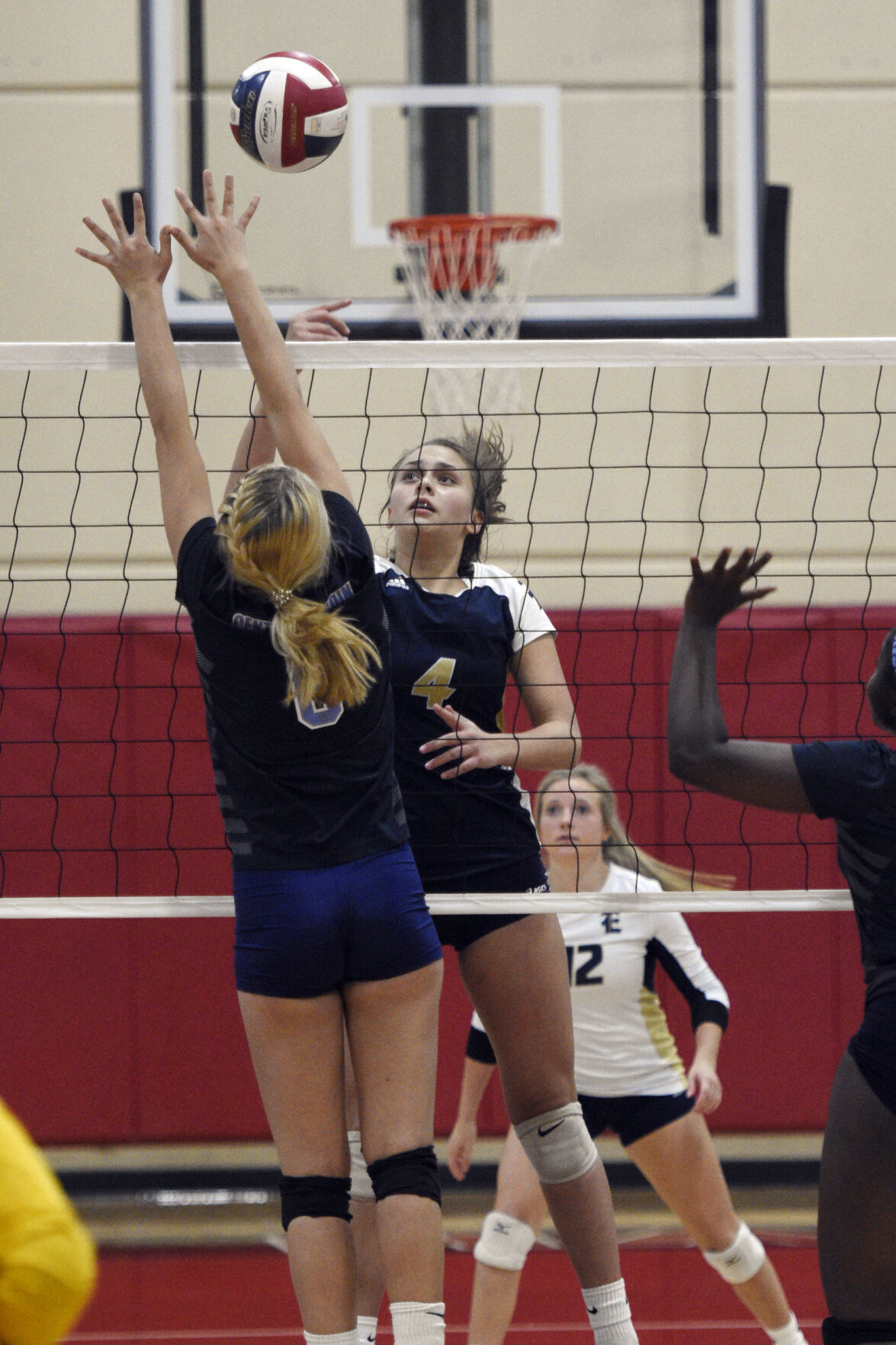 Elizabethtown’s Sarah Clark sends up a shot with Central Hardin’s Jenasys Mullen looking to block it.

Members of the Elizabethtown volleyball team celebrate on the court immediately after winning the fifth set and defeating Central Hardin to win the 5th Region Tournament Thursday night at John Hardin High School.

Elizabethtown’s Sarah Clark sends up a shot with Central Hardin’s Jenasys Mullen looking to block it.

Elizabethtown and Central Hardin volleyball had not been strangers to each other all season long. In fact, Thursday night’s meeting in the 5th Region Tourna­ment final was the fourth time the two teams had faced off against one another since the season started in September.

Central Hardin had won the previous two, including a 3-1 victory in the 17th District Tournament final last week, but it was Eliza­bethtown who came out on top this time around at John Hardin High School.

Holding on through five sets, the Lady Panthers punched their ticket to the state tournament by defeating the Lady Bruins 3-2.

Like the first time the two district foes met Sept. 17, Eliza­bethtown came out on top of a five-set battle.

Lady Panthers coach Bart Catlett attributed holding on to this victory to the team maintaining its confidence and composure throughout the match.

The loss was just Central Hardin’s second of the year. The only other game the Lady Bruins did not come out victorious in was their Sept. 17 five-set loss to Elizabethtown.

“It’s one of those nights we didn’t have our best. E’town outplayed us. It’s that simple,” Central Hardin coach Bill Rineker said. “I just don’t feel like we brought our best tonight, but I’ll tell you what, our kids’ heart got them to that fifth set. The way we played, we probably should’ve lost 3-0. We found a way to dig and claw and fight to get to set 5, so I really wouldn’t be any more proud of them had we won.”

A close start to the first set saw Elizabethtown take an early lead with the Lady Bruins not far behind. Tied at 21-21, the Lady Panthers took four out of the remaining five points to win the first set 25-22.

After initially trailing Eliza­beth­town in the second set, Central Hardin again stayed close and eventually took the lead at 8-7. The Lady Bruins did not fall behind the Lady Panthers again, surviving ties at 15-15 and 17-17 to stay in control for a 25-20 win and tie the match at 1-1.

The next two sets saw both Elizabethtown and Central Hardin build up larger leads and each win by larger margins than the previous two sets. In the third set, the Lady Panthers gave themselves some space midway through and held on to win 25-16 and take a 2-1 advantage on the match. The Lady Bruins responded in the fourth set by jumping past Elizabethtown early on. Central Hardin continued to build up a large lead of its own to claim a 25-13 match-tying victory and keep the night alive.

In the decisive fifth set, the Lady Panthers took the lead from the start and did not surrender it. The Lady Bruins initially kept themselves in the set and came within one point of tying it at 10-9. Elizabethtown did not give up another point and won the set 15-9 to claim the match.

“I thought Central played really well and I thought we did too. We both came to play and it was a hard-fought battle,” Elizabethtown junior M.E. Hargan said. “We just pulled out there at the end. We got a little timid, but we came back together.”

Following the game, Godfrey, Hargan, Grace Filburn and Sarah Clark were named to the all-tournament team for the Lady Panthers. Addie Atcher, Kelsey Brangers and Lindsey Vest were selected from Central Hardin.

The loss brought the Lady Bruins’ season to a close with a 23-2 record.

“This loss is on me. It is on me, it is not on my team,” Rineker said. “I didn’t have them prepared as well as I should’ve, so I will take 100 percent of the blame. It wasn’t there fault. I just didn’t do a good enough job.”

Hargan finished the night with 27 kills for Elizabethtown. Godfrey had 26 digs. Clark had 22 assists, just ahead of Filburn at 21. Filburn also had three aces.

This is a familiar state tournament foe for the Lady Panthers, who fell to the Lady Jaguars 3-0 in the first round of the 2019 tournament.