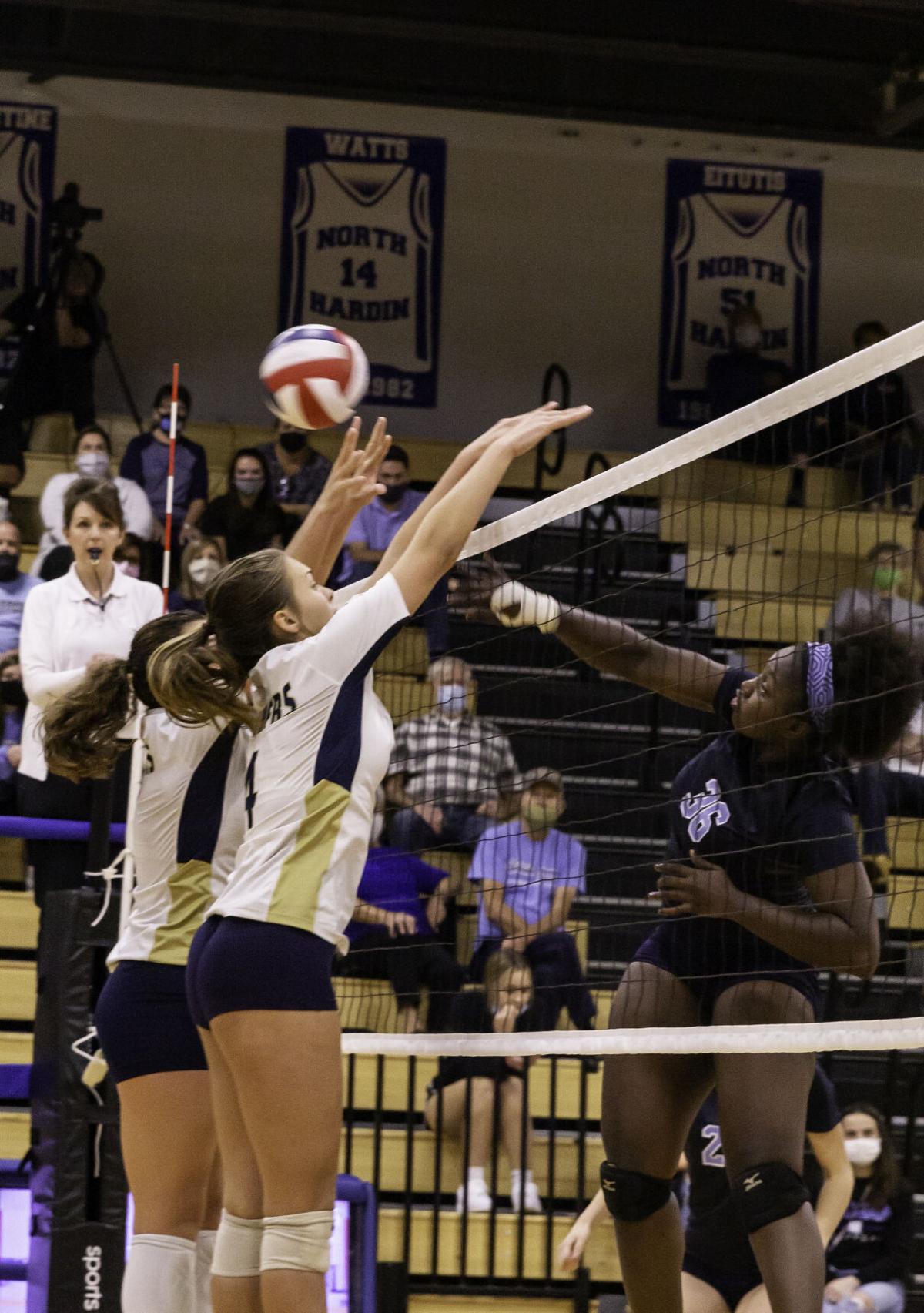 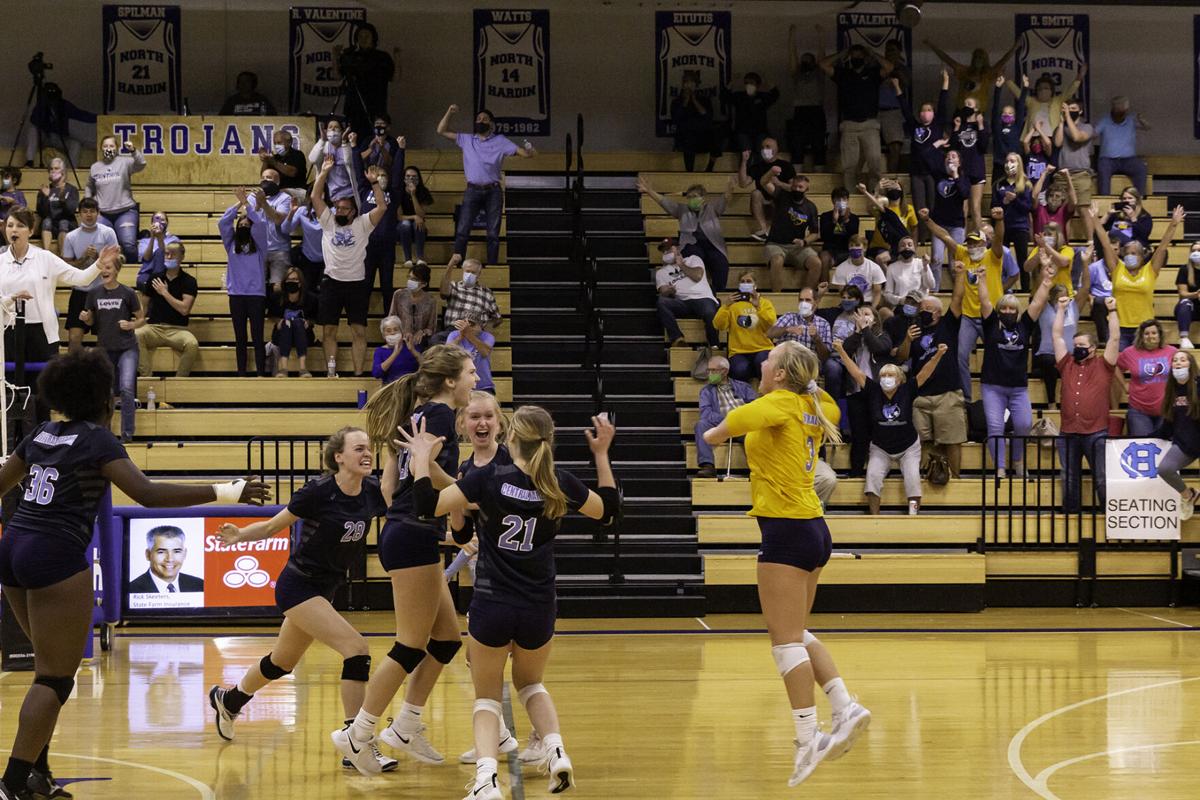 The Central Hardin Lady Bruins and their fans erupt in celebration Thursday after scoring the final point to capture the 17th District Championship over Elizabethtown at North Hardin High School. 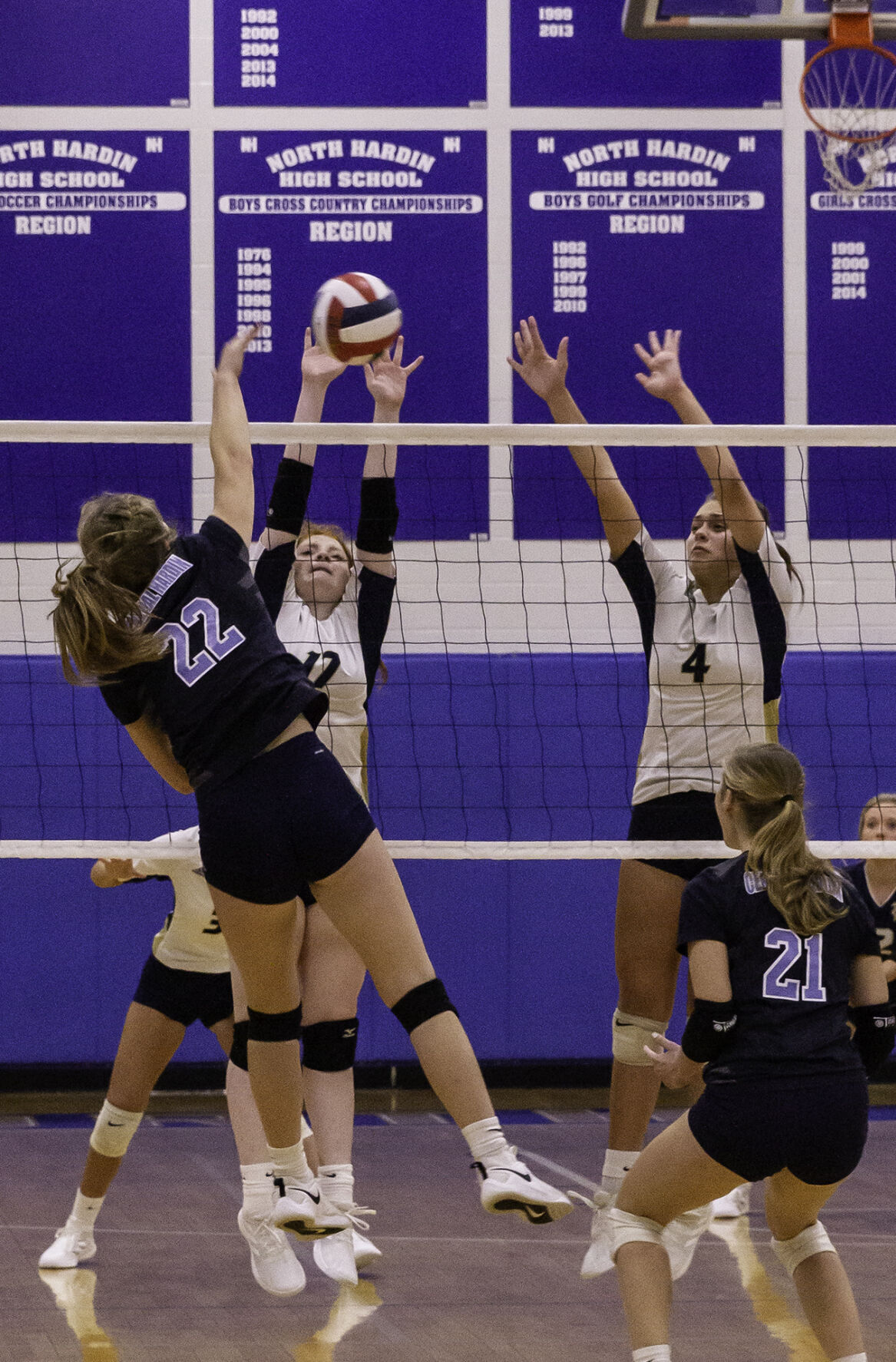 The Central Hardin Lady Bruins and their fans erupt in celebration Thursday after scoring the final point to capture the 17th District Championship over Elizabethtown at North Hardin High School.

In a game Thursday night where all but one match was decided by three points or less, the 17th District Volleyball Championship game had all the feeling of a typical Central Hardin-Elizabethtown match up.

There were key blocks, aces and kills for each side as Central Hardin pulled off three straight matches after losing the first (18-25, 25-22, 28-26, 26-24) for the district title at North Hardin High School.

“I’m going to be honest, I feel like neither team played anywhere near their best,” said Central Hardin coach Bill Rineker. “It was kind of one of those gut-it-out, ugly, find-a-way-to-win games, even though neither side was playing well. I feel like we stuck together, and we’ve done that all year. This is a very close group and, I think sometimes in the worst moments, they stick together and we find a way to get through it.”

The teams are familiar foes, meeting in every district title game since 2003. Central Hardin leads the series 13-5.

“I feel like, like we always do against E’town, it’s nerves,” Central Hardin senior libero Kelsey Brangers said. “We are always nervous when we play them. We have to get past those first. (After the first match, Coach) said you could lose if you play hard, but lose playing hard. Don’t lose not giving max effort.”

“I don’t know why, but when he yells at us, I feel like we play better,” she said. “It hurts us that we let him down that much. We look up so much to him.”

Rineker said some of his frustration came from mistakes the Lady Bruins were committing.

“We were making too many unforced errors,” he said. “We were serving balls out, hitting balls out that we normally don’t. We just weren’t sharp tonight. But again, we found a way to get through. We just gutted this one out.”

Elizabethtown senior outside hitter Elizabeth Godfrey said the Lady Panthers aggressive style lead to some missed opportunities they will have to fine tune before the region tournament next week.

“So especially in the beginning, we had a lot of missed serves,” she said. “We were trying to serve as aggressive as we could, and sometimes, it sailed out of bounds. That and spreading the ball around. They were sitting on our outsides and they knew we were going to go there every time. So we just have to start moving the ball around and adding more plays.”

“I think the difference was just spreading the ball out,” she said. “We need to work on that a little bit. We can do better.

“Going into the region, we’re probably work a lot on blocking and serving,” she added. “Serving’s a key point to winning a game.”

After Central Hardin won the second match, 25-22, the third match, 28-26, was decided on two net calls against Elizabethtown, first breaking the tie at 26 and then giving Central Hardin the match point.

“The calls come. Sometimes we win them, sometimes we lose them, but ultimately, if we play our game, know what we’re doing and play our best, then we don’t have to worry about that,” Godfrey said, shrugging it off. “As hard as it was, we were just trying to stay in it, pick each other up and not let it affect us.”

Central Hardin, who has won 8 of the last 10 district championships, played without senior outside hitter Jenasys Mullen, who has been out because of COVID-19-related guidelines.

“We’ll have her back for the region tournament, which I think makes a big difference,” Rineker said. “We can move kids that had to play out of position tonight back to where they belong. I really think that will make a major difference.”

Central Hardin, 20-1 on the season, and Elizbethtown, 13-4-4 on the season, both advance to the region tournament to be played next week at John Hardin High School.