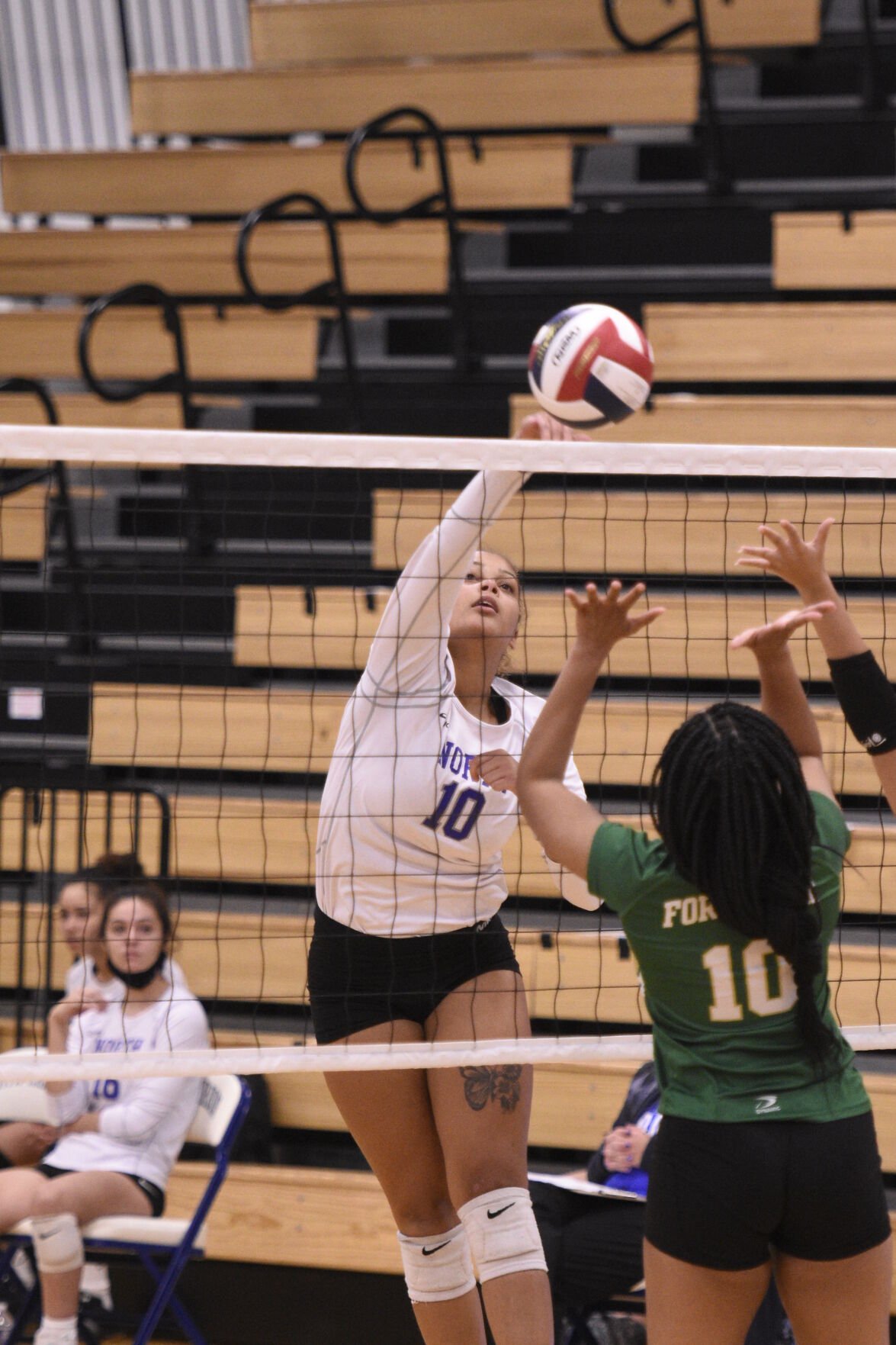 North Hardin’s Makayla Green sends a shot over the net past Fort Knox’s Jaylin Ivory Monday night during the opening match of the 17th District Tournament Monday night at North Hardin High School. Green was one of three Lady Trojans with nine kills. 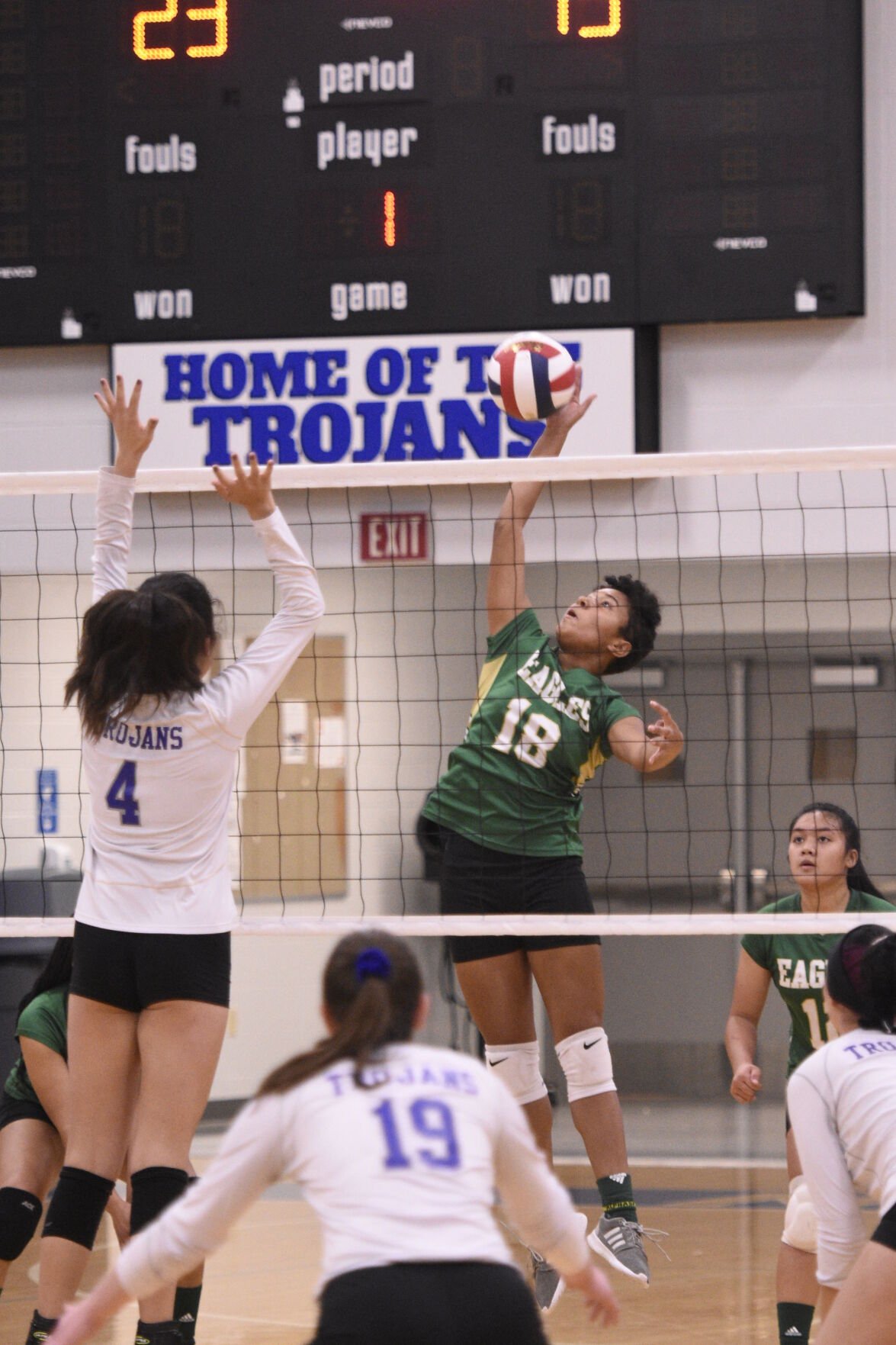 North Hardin’s Makayla Green sends a shot over the net past Fort Knox’s Jaylin Ivory Monday night during the opening match of the 17th District Tournament Monday night at North Hardin High School. Green was one of three Lady Trojans with nine kills.

It wasn’t a perfect game Monday night to open the 17th District Tournament, but it was still a win for North Hardin volleyball.

Hosting No. 5 seed Fort Knox, the No. 4 seed and tournament host Lady Trojans had to battle at times but held on to preserve a three-set victory over the Lady Eagles on their home turf. North Hardin won by scores of 25-13, 25-19 and 25-19.

“We kind of were a little slower than our normal pace,” North Hardin coach Amanda Patterson said. “Fort Knox played really well. Got a lot of balls up, got a lot of balls back and I think we were just a little hesitant and not really ready for that tonight.”

North Hardin senior Makayla Green also attributed the team’s ability to hold off Fort Knox down the stretch to playing smart and keeping the ball off the ground.

Green was one of three Lady Trojans to record nine kills over the course of the match, along with Addysun Blevins and Faith Ramos.

“We could’ve played a little bit better, but we played our heart out tonight,” Green said. “The momentum wasn’t really there, but we did what we could and we came out with a win.”

A close start to the first set saw North Hardin break away as it continued. By its close, the Lady Trojans had a double-digit lead and didn’t let up to take a 1-0 advantage on the match.

The Lady Eagles continued to keep things close early in the second set and stayed within reach of North Hardin for a longer period of time. Tied at 13 apiece, the Lady Trojans won the next six points to break away and make it a 19-13 lead.

Fort Knox found six more points over the course of the set to fall into a 2-0 hole on the match.

Down 3-2 to the Lady Eagles early in the third set, North Hardin proceeded to hit three straight to retake control.

Down 15-8, the Lady Eagles won eight out of the next nine points to tie the match at 16-16. After the Lady Trojans hit the following point, Fort Knox tied it again at 17-17 before taking the next point to retake the lead.

North Hardin did not fall any further behind and took the next four points for a 21-18 lead.

The Lady Trojans gave up one more point on their way to the match victory.

The loss brought Fort Knox’s season to a close with a 0-7 record. The Lady Eagles, who started their season on Sept. 24, initially were not expected to play due to pandemic-related Department of Defense Education Activity regulations that prevented other fall sports such as football and soccer from fielding teams.

After so much initial uncertainty, Fort Knox coach Ramon Rodriguez Sr. said he was just glad his players were able to have at least a partial season. He was also glad the Lady Eagles were able to compete in the postseason.

“For us it was a short season, but the girls did great. I’m very happy with how we played (Monday), very happy,” Rodriguez Sr. said. “It was great for us to have a season and the girls enjoyed it. At least we had the opportunity to play.”

North Hardin (5-10) will be back in action tonight when it takes on Elizabethtown (12-4) in the 17th District Tournament semifinals. The winner of this game will face the winner of tonight’s John Hardin-Central Hardin game in the district final on Thursday.

“We talked a lot about coming out with a whole lot of confidence, because we have a really strong, aggressive, cohesive team,” Patterson said. “I think if we come out with confidence and we come out aggressive and staying positive the entire match, it’ll be a really good match tomorrow.”