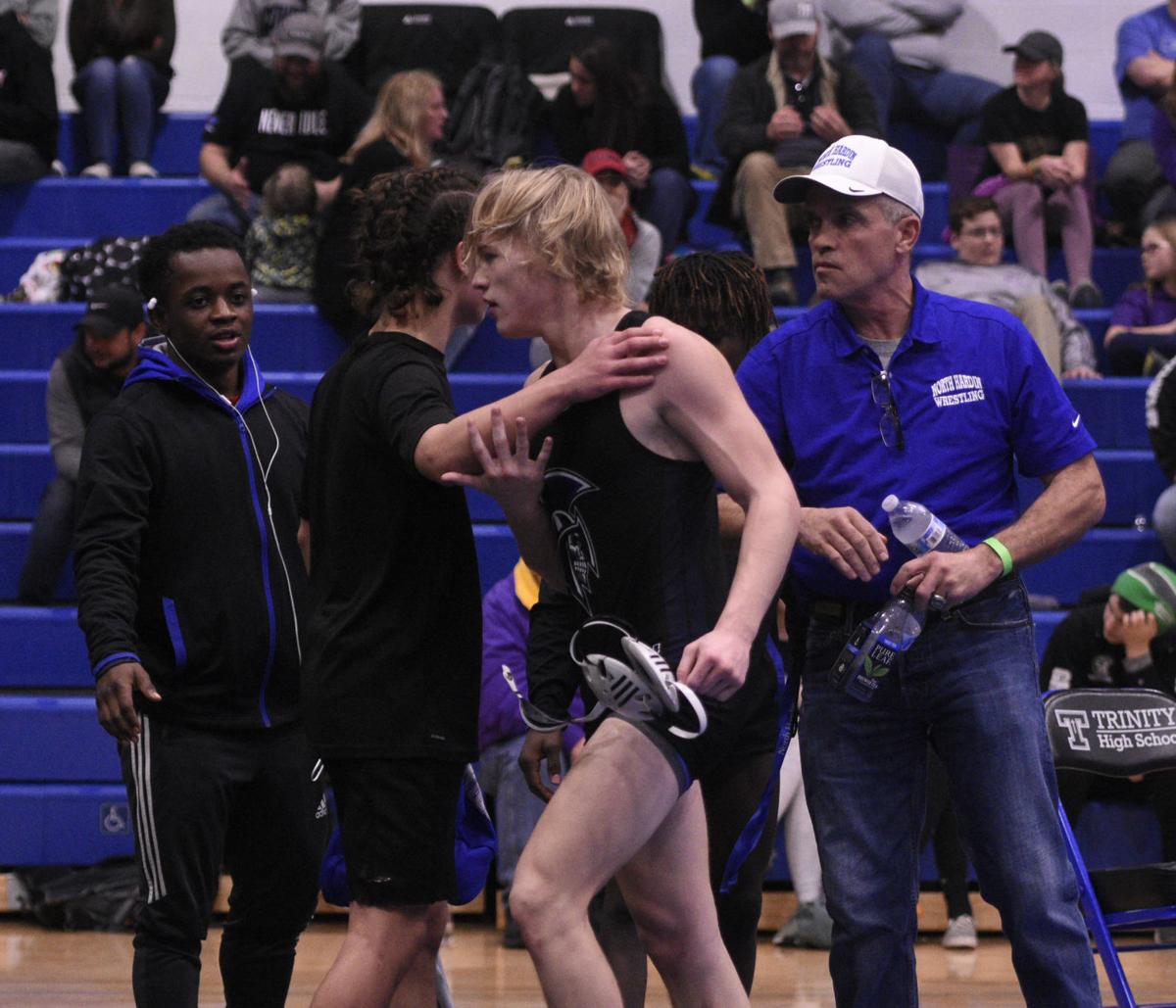 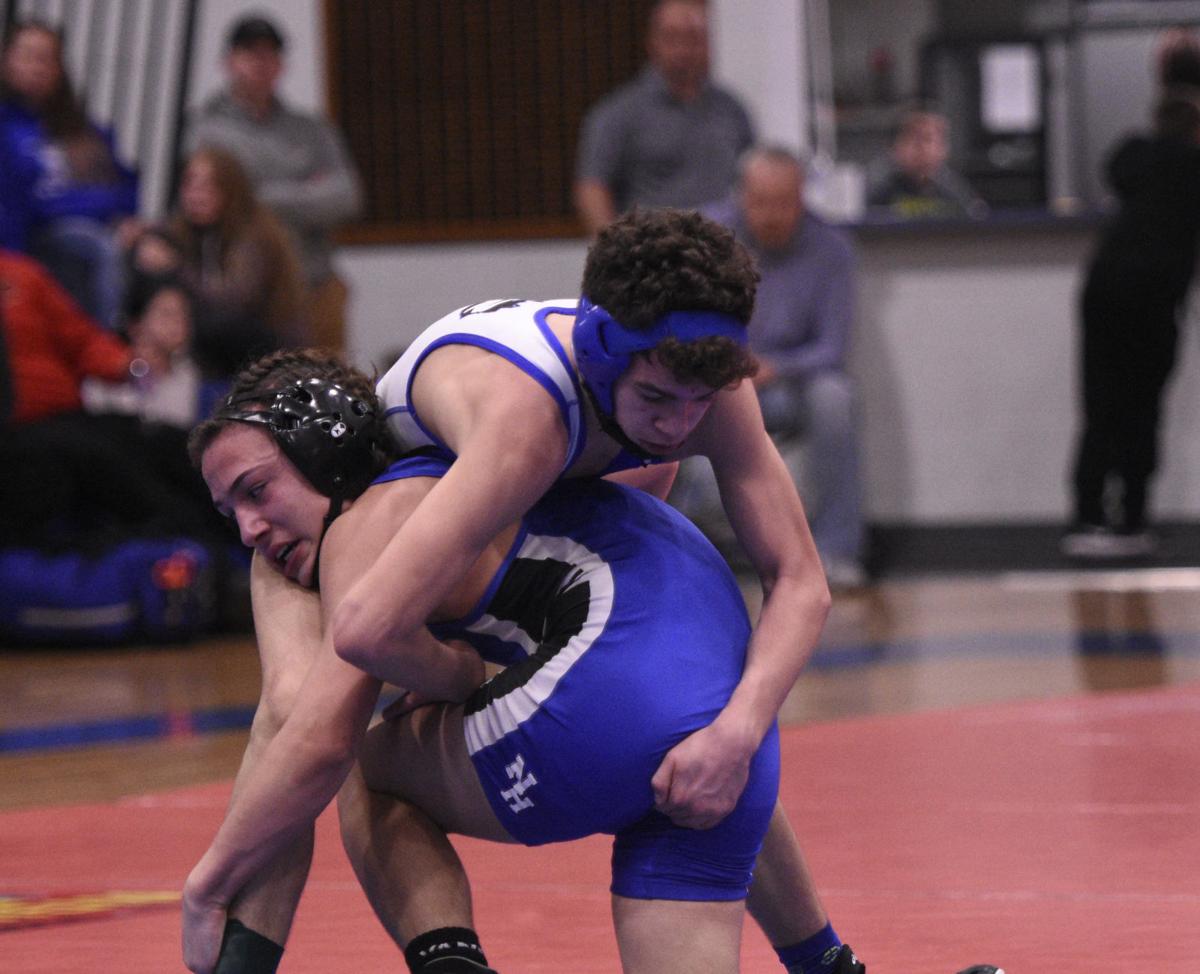 Braedon Herron (bottom) grapples against LaRue County’s Gabe Fortier on the way to a victory in the Region 2 120-pound finals. 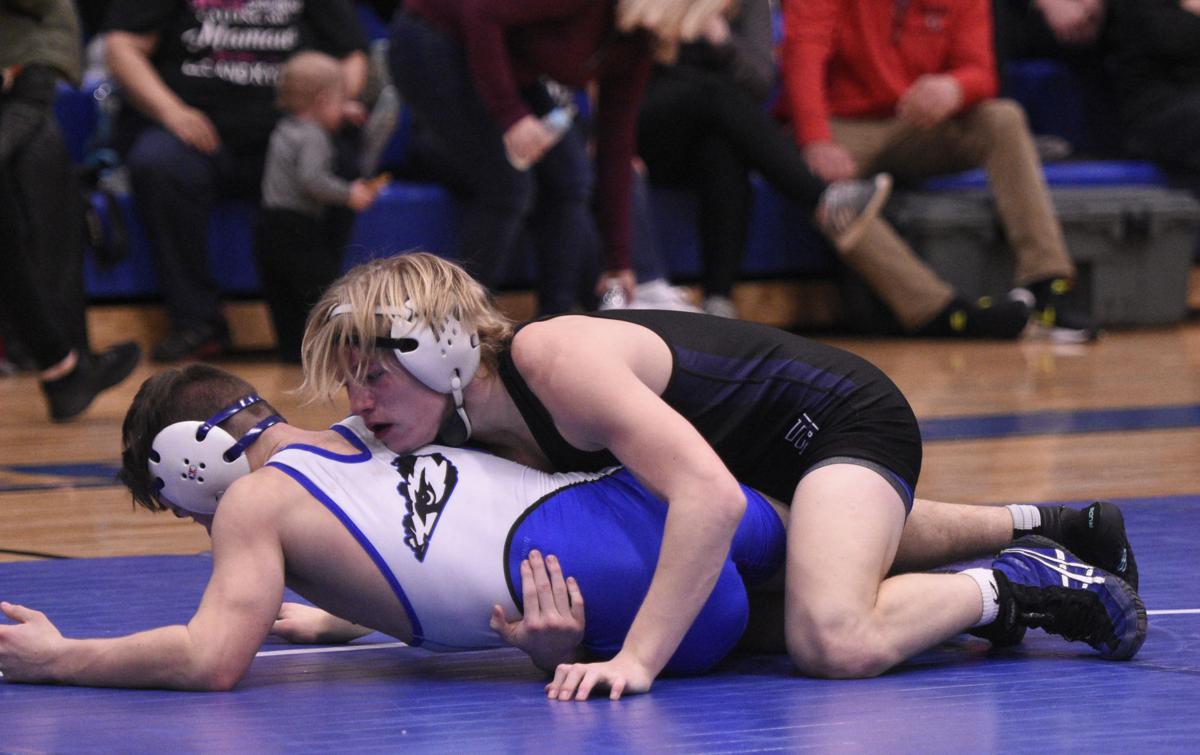 Braedon Herron (bottom) grapples against LaRue County’s Gabe Fortier on the way to a victory in the Region 2 120-pound finals.

Brothers sometimes fight. The relationship can at times get competitive. That doesn’t mean they can’t also fight and compete on the same side.

That’s the case of North Hardin wrestling’s Braedon and Devon Herron. The two are separated by one year, with Devon a sophomore and Braedon a freshman.

Despite being on the younger side, the duo is heading to Lexington this weekend to represent the Trojans at the KHSAA State Wrestling Championships. The two-day event kicks off today and the Herrons have the same goal in mind: make it to Saturday and try to earn some hardware.

“It’s great that I’m going to State knowing that I’m close to that top spot,” Devon said. “I’m so close, I’ve just gotta finish it out at State this weekend.”

This isn’t the first State trip for either of the two brothers despite being on the younger side. This experience already gives the underclassmen an idea of what those days of practice leading up are like.

“Practice the last week, we’ve got to step it up,” Braedon said. “Just try to work as hard as we can right before that State time. Main thing is just alwasy try to get our weight down.”

While the duo have both qualified for the state championships previously, last weekend they accomplished something they had not done before.

At Saturday’s Region 2 finals at Trinity-Whitesville, Braedon and Devon won their weight classes in back-to-back final rounds. Braedon went first in the 120-pound division and won by decision over LaRue County’s Gabe Fortier. Devon followed this in the 126 finals with a decision victory over LaRue County’s Thomas Hoppes.

The first brother a freshman, the next brother a sophomore. One after the other.

As the days passed since the region championships, the two have gotten a chance to reflect on the somewhat rare circumstances of their victories.

“I think it’s amazing honestly. You just don’t hear of that a lot,” Devon said. “But the more it’s settling in, the more I’m thinking to myself about how big of a thing that is.”

Devon previously won a region title as an eighth grader. For Braedon, this was the younger Herron’s first victory in a region final bout. Right after his victory, he got to watch Devon claim his second.

Braedon acknowledged it is not often high school wrestlers can say their first region title came in this unique a fashion.

“It feels great. Not many people can do it,” Braedon said. “Not everybody has a brother that’s right after their weight class.”

This experience was a highlight for the two wrestlers who share more than just the bond of being teammates. This family connection has been important in helping each other strive for greatness.

At the same time, Braedon and Devon build each other up in other ways than just drills on the mat. The brothers said they actually had not been practicing with each other ahead of States.

Instead, their support for each other often comes on the mental side of the sport. For the brothers, success is contagious and each one’s wins motivates the other.

“When I watch my brother, just watching him wrestle makes me feel so much more confident and just makes me feel estatic,” Devon said. “I just love seeing him out there and wreslting his best,”

Like any sibling relationship, it isn’t always perfect. Being a year older, Devon will try to offer advice to Braedon, which in the immediate moment can get under Braedon’s skin.

“As much as (Braedon) hates to hear it, he has his moments where he doesn’t do too great,” Devon said. “He hears it from Coach, from Dad. I’m always trying to tell him, just keep his head up, keep fighting and work hard. I try to tell him as much as I can.”

While it may not be what he wants to hear sometimes, Braedon said he knows Devon comes from a good place.

“At the time, it’s always annoying. Usually after I lose a match, he’ll come and give me advice,” Braedon said. “But I see that it pays off. I listen to it and try to correct my mistakes or listen to what people have to say.”

This advice can also go the other way.

“Sometimes when (Devon) messes up or something, I always go over there and tell him something just to help him out,” Braedon said. “We both help each other out when we need it.”

The two wrestlers have different characteristics besides just their weight classes. Warner said these differences in individual styles have allowed them to succeed in their own way and make it back to State.

“Devon would be he won’t stop. He gets in a bad situation, he’ll figure a way out of it. Braedon is explosive. He’ll hit something that nobody saw coming,” Warner said. “That’s two things that I attribute to those boys’ success.”

Through the different skillsets and occasional disagreements, the two are always there for one another. This weekend in Lexington and future seasons will be no different.

“It’s great and it brings a lot of laughter. The little laughter we do have, it comes from my brother being on the team,” Devon said. “Me and him together, we’re gonna get a laugh somewhere.”