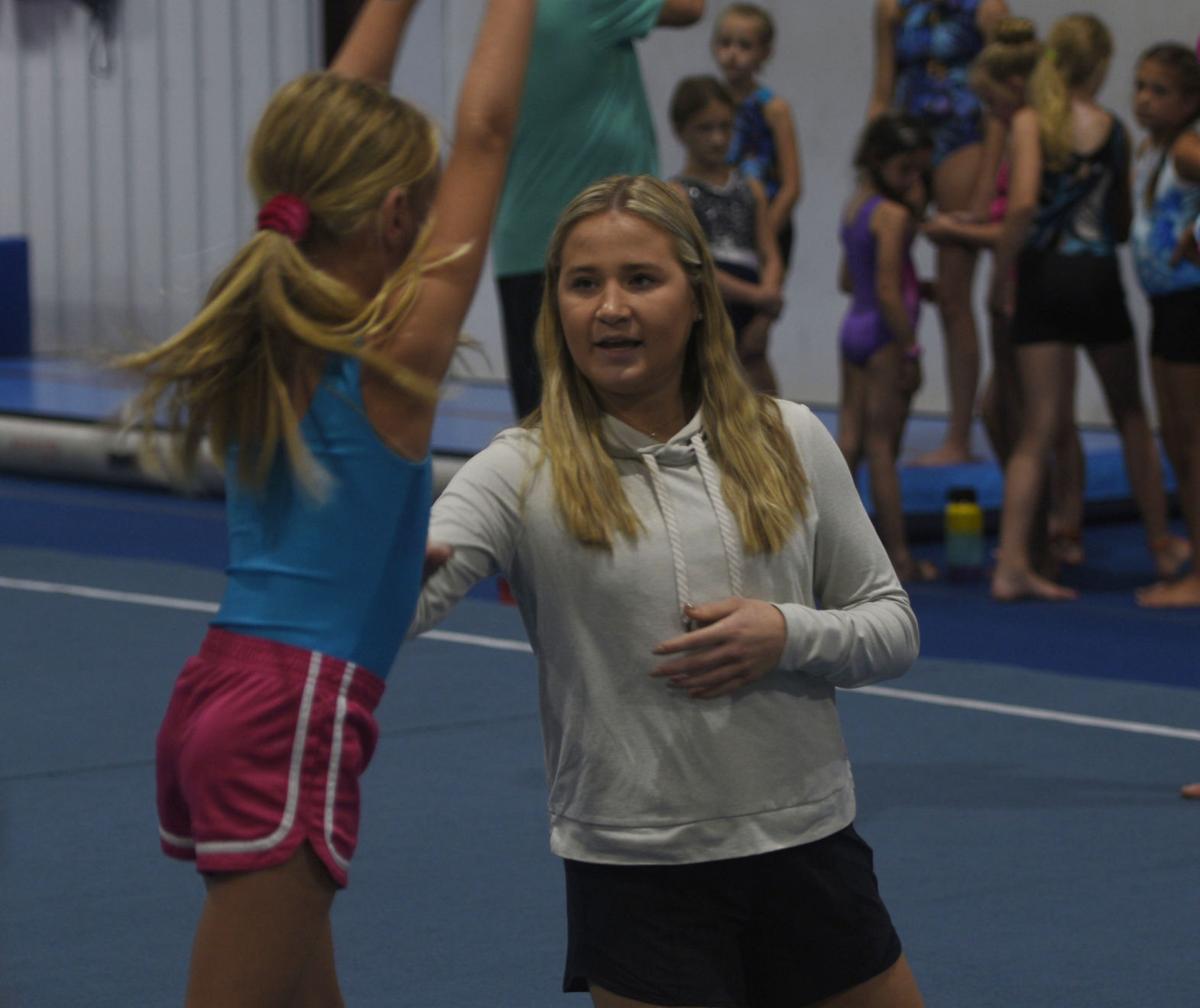 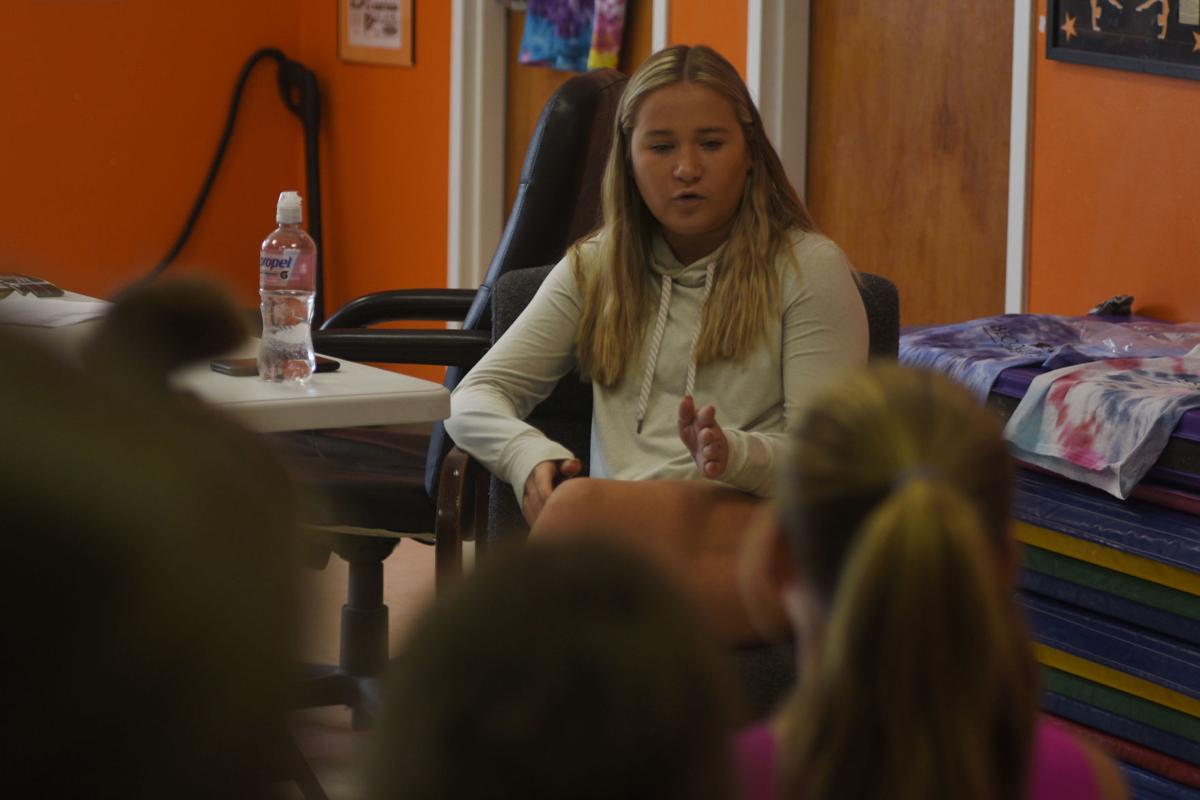 Athletes, coaches and fans had to wait a year, but the Summer Olympics are finally underway in Tokyo. While the games may be taking place on the other side of the world, some of the area’s young gymnasts had their own taste of the Olympics here in Hardin County earlier this week.

Cecilia-based Becca’s Place Gymnastics hosted Rio 2016 Team USA gymnast Madison Kocian as a guest-coach Sunday and Monday for the final two days of its annual summer gymnastics camp, giving participants the opportunity to learn from and interact with a gold and silver medal-winning Olympian.

“It’s been a really cool experience. I think this is my first time in Kentucky actually. It was a little bit rough getting here, but I’m really excited to be here for all of the kids,” Kocian said. “I love working with kids, so any opportunity that I can get to motivate and inspire the next generation, I’ll definitely take.”

The young gymnasts received floor coaching from Kocian and feedback on their techniques. Kocian also participated in a Q&A session in which the gymnasts were divided into smaller groups to ensure more questions could be asked.

“I think everyone’s working really hard,” she said. “I’m just trying to give them little tips of advice and little corrections and just share my experiences to help them in any way I can.”

While the campers benefited from Kocian’s knowledge, her participation was about more than just gymnastics. Kocian also partnered with the Becca’s Place competitive team to raise money for LaRue County sisters Adley and Tenley Ward, who are both battling Leukemia.

Each team member had a fundraising page on the 99pledges app, with the top earners getting the chance to share a semi-private lesson with Kocian in addition to the larger group session.

Kocian, who previously has participated in other philanthropic endeavors for childhood cancer, was drawn to this project due in part to the unfortunate circumstance of two children in the same family with the same diagnosis.

“I’m really passionate about pediatric cancer and helping those patients and families,” she said. “It was really special to be able to be here with all the gymnasts that raised a bunch of money and being able to present the family the check was really awesome.”

Kocian added that learning of the Ward sisters’ interest in the sport also had helped bring her to Becca’s Place.

“They had kind of just started gymnastics. One was starting to be on the upclimb and then the next one got it and was diagnosed,” she said. “I’m sure it’s so hard for their family and just trying to support them in any way possible is definitely what this whole gym family has been doing.”

The Becca’s Place competitive team was told June 18 of Kocian’s participation and the opportunity for a private lesson. The fundraiser portion ended about a month later.

The team ultimately raised $18,555 for the Ward family. Becca’s Place co-owner and co-head coach Jennifer Ryan added that six of the team’s gymnasts were able to take part in the semi-private lesson.

“We’d always wanted to do something for the Ward family, (Becca’s Place co-owner and co-head coach Jessika Bohannon-Ferris) and I, because a big part of our mission is to teach gymnastics, but teach life lessons through gymnastics,” Ryan said. “I thought that $5,000 was a pretty lofty goal, and then we hit that in like 10 days.”

Along with teammates Simone Biles, Gabby Douglas, Laurie Hernandez and Aly Raisman, Kocian was a member of the 2016 Summer Olympic United States women’s artistic national gymnastics team that won the gold medal. The group, known as the “Final Five”, earned the United States its third team Olympic gold medal in the event and gave the team a successful defense of its London 2012 gold-medal performance. As an individual, Kocian also earned a silver medal in the uneven bars.

In addition to the Olympics, she was a part of the 2014 and 2015 U.S. teams that took first place in the World Artistic Gymnastics Championships, earning a first-place finish on the uneven bars in 2015.

At the collegiate level, Kocian was a member of the UCLA women’s gymnastics program. She won a national championship with the Bruins in 2018 and graduated from UCLA in 2020.

“I remember my first opportunity to meet an Olympian. I was 16, I still remember it and it had a huge impact on me,” Ryan said. “I didn’t really know where to start to bring anybody of (Kocian’s) caliber to Cecilia, but I just started reaching out on all of her social media channels and when she responded to me, I was so excited.”

In addition to helping the campers take part in a charitable act and learn more about the sport of gymnastics, Kocian said she hoped they learned more about themselves as individuals as well.

“One of the biggest things is that, for me, gymnastics wasn’t going to last my whole life, so I wanted to expand who I was and what I really believed in and my values,” she said. “I’ve been fortunate to have a platform after the Olympics to do that. So I think, for all of them, I just want them to kind of find what they’re passionate about, because I’m passionate about working with kids and helping out others and doing that in any aspect. For them right now, they live in the gym, but even just helping out a teammate or someone on a tough day eventually will translate later in life into whatever they’re passionate about.”