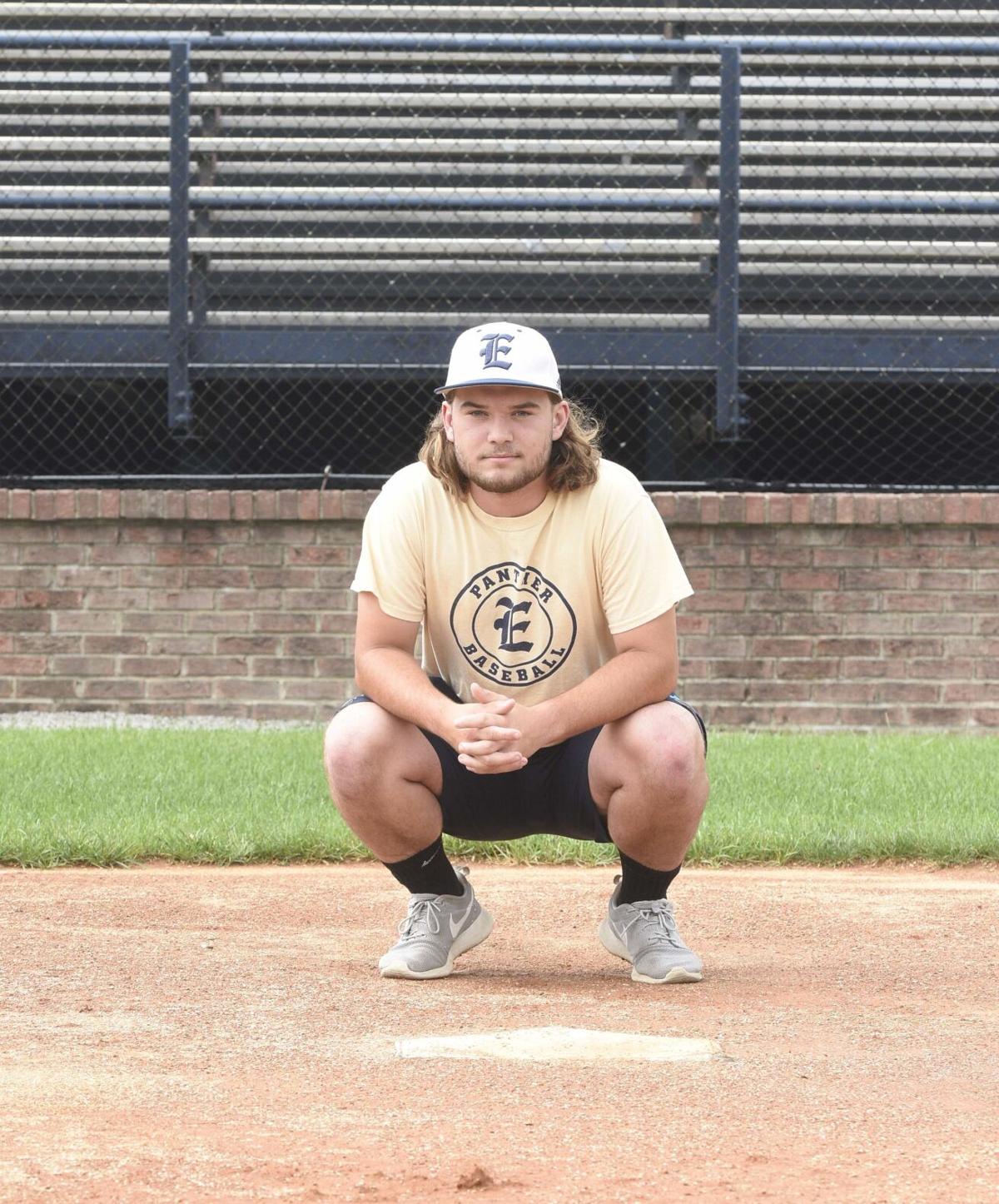 MATT TYSON/The News-Enterprise Elizabethtown senior Brandon Parsons is gearing up for one last run as the Panthers’ catcher. For many on the team’s pitching staff, Parsons has been a familiar face behind the plate for years. 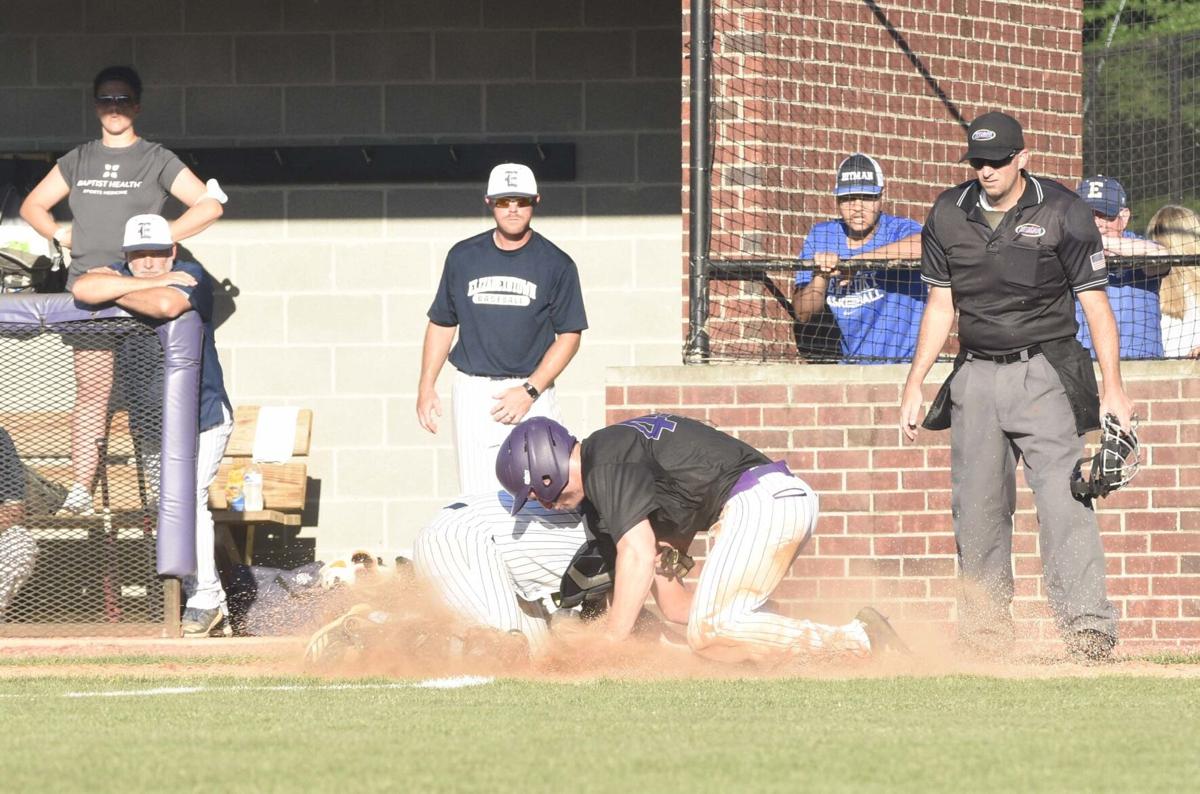 Brandon Parsons makes the out at the plate after Bardstown's Gray Clark attempted to steal home from third base in the top of the fourth inning of Monday's 5th Region title game. A 1-1 game at the time, the out prevented the Tigers from scoring the go-ahead run. MATT TYSON/The News-Enterprise

MATT TYSON/The News-Enterprise Elizabethtown senior Brandon Parsons is gearing up for one last run as the Panthers’ catcher. For many on the team’s pitching staff, Parsons has been a familiar face behind the plate for years.

Brandon Parsons makes the out at the plate after Bardstown's Gray Clark attempted to steal home from third base in the top of the fourth inning of Monday's 5th Region title game. A 1-1 game at the time, the out prevented the Tigers from scoring the go-ahead run. MATT TYSON/The News-Enterprise

Brandon Parsons has been no stranger to region championships and postseason success. He’s already experienced that twice back in the fall as a member of the boys’ soccer program and the football program.

Now, he’s getting ready for one last state tournament run before his time at the high school level comes to an end. This time, it will be on the diamond.

Fresh off a 5th Region title earlier this week, the senior catcher and his teammates start the KHSAA State Baseball Tournament this weekend. The Panthers open the tournament at home Saturday against 8th Region champion Collins in Semi-State.

“I know I’m speaking for all the seniors here as well. First off, we’re very excited and happy to be here. We were really excited last year and of course spring sports got shutdown with COVID. I know a lot of people have already been speaking about that and especially because our school’s been doing so well in all other aspects of athletics,” Parsons said. “We really wanted to keep it going. … We know this is a winning program, E’town baseball’s built on that. We just wanted to keep it going. We’re excited, we like our chances and we’re gonna keep doing everything we can to keep the train going.”

There has been plenty for Parsons and his teammates to be excited about since Monday’s 4-3 win over Bardstown in the region final. At the same time, they’ve been using the days leading up to Saturday to get ready and prepare for the Titans.

For Parsons, that also means helping make sure the team’s pitchers are ready to go.

“I love all of our pitchers, from top to bottom. I think we have a really good staff,” he said. “Just gotta make sure that their confidence is high.”

This type of role is nothing new for Parsons. He began catching as a middle schooler and has been playing the position ever since.

Over the years, Par­son’s been the guy behind the plate for several different teammates. Many are still throwing to him today as fellow seniors.

Having so many seasons to grow these relationships and rapport has helped him pick up the necessary skills that are vital to the relationship between a pitcher and a catcher.

This trust hasn’t been limited to fellow members of the Class of 2021. Parsons said it extends to the team’s entire pitching staff, regardless of age.

“All the seniors especially are really tight and close-knit. We all have that relationship, but even the underclassmen have it too. I know Austin Jennings (sophomore), just to name one, he threw this postseason. We have all kinds of pitchers, Hendrix Thomas (sophomore) and all them,” he said. “It’s really hard, but easy now, as a senior to have that experience just to know what each pitcher relies on. What their off-speed is, what their fastball is and just everything about that and even help communicate that with the coach and just tell him what they’re feeling about today.”

Panther coach Chase Greenwell has seen firsthand how Parsons has developed these relationships, going back to his time as an assistant coach with the program.

“His presence behind the plate, not only receiving and blocking, but just working with our pitching staff and the rapport he has with them allows them to feel comfortable on the mound and throw with ease,” Greenwell said. “They grew up playing with each other.”

Parsons attributed part of the leadership skill development to his time on the soccer field.

A goalkeeper, Parsons believes there are multiple similarities between his positions in baseball and soccer that have helped him excel at both.

“As a catcher, you see the whole field. As a goalkeeper, you see the whole field. It just help to make sure if someone’s having a bad day on the field that you bring them up and just let them know that yes, you want them to be better, but at the same time you’re here for them,” Parsons said. “Pressure too. I know in soccer as the keeper, a lot of times pressure is here and that’s the same thing as catcher. If you feel pressure when there’s a runner on first and he’s a threat to steal second, you have that pressure.”

Playing baseball for Elizabethtown over the years has meant many different things for Parsons, but most of all, it’s continued a family tradition.

His grandfather, Chuck Morris, played on the 1975 state championship team. Like Parsons today, he was a senior on that team himself.

“He’s been a big reason why I love baseball and even if I’m not playing in college, I definitely still have a love for it. One thing for me is really the state championship and trying to bring on that legacy,” Parsons said. “It’s definitely my papaw and my parents and my love for E’town. I’ve always loved E’town. My parents went here, my grandparents went here. My dad’s been a teacher at the high school, my mom’s a teacher at the elementary school. I love E’town and I just want to keep it going for as much as I can.”