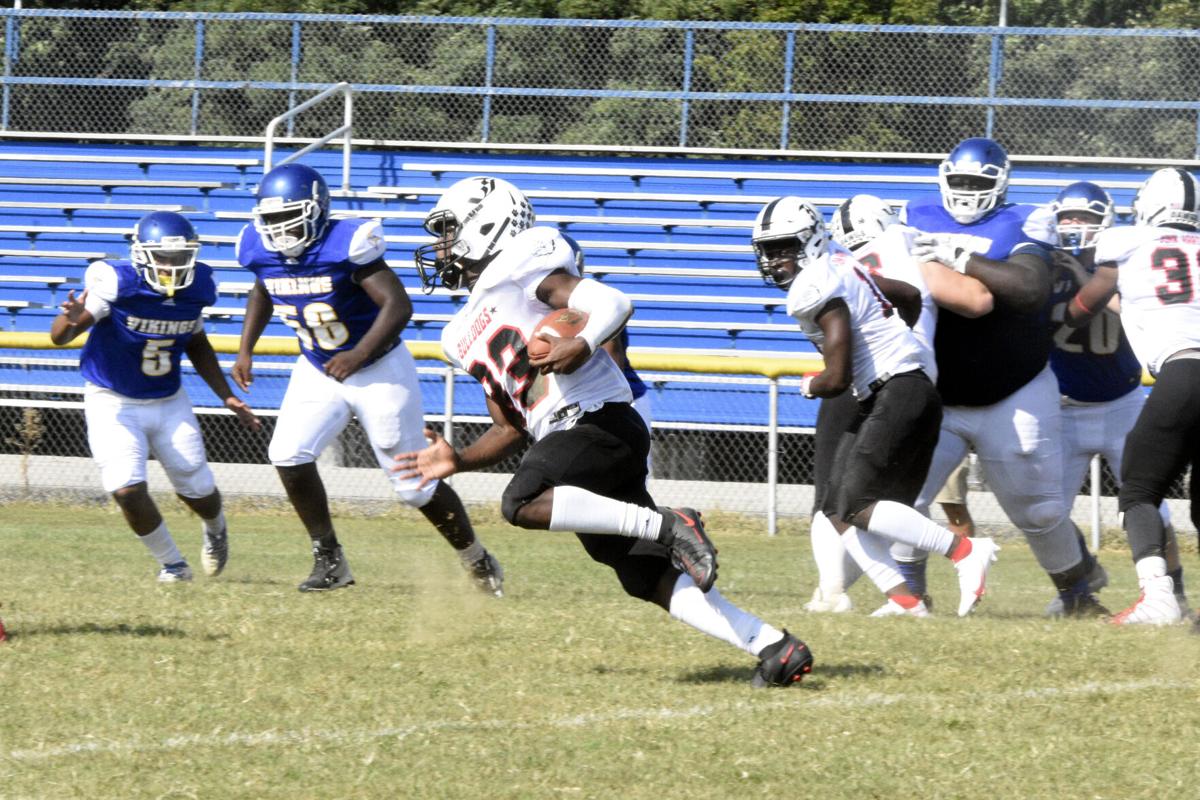 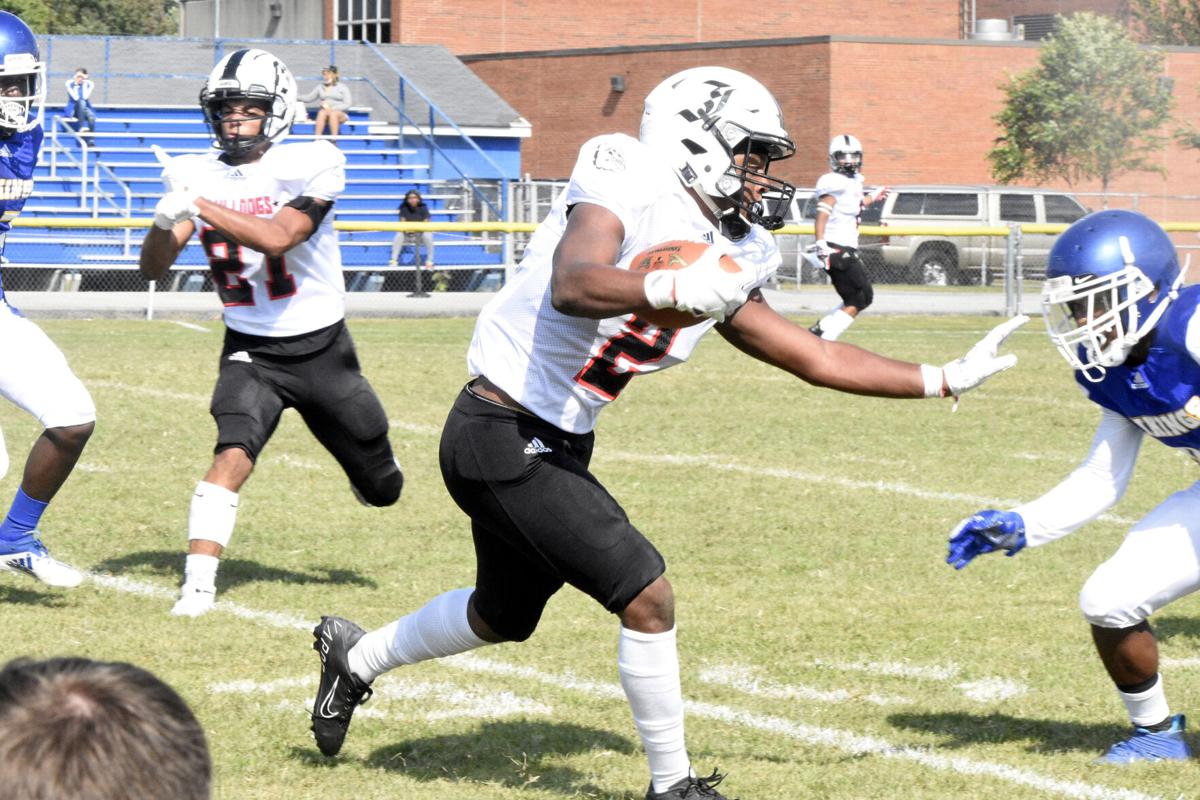 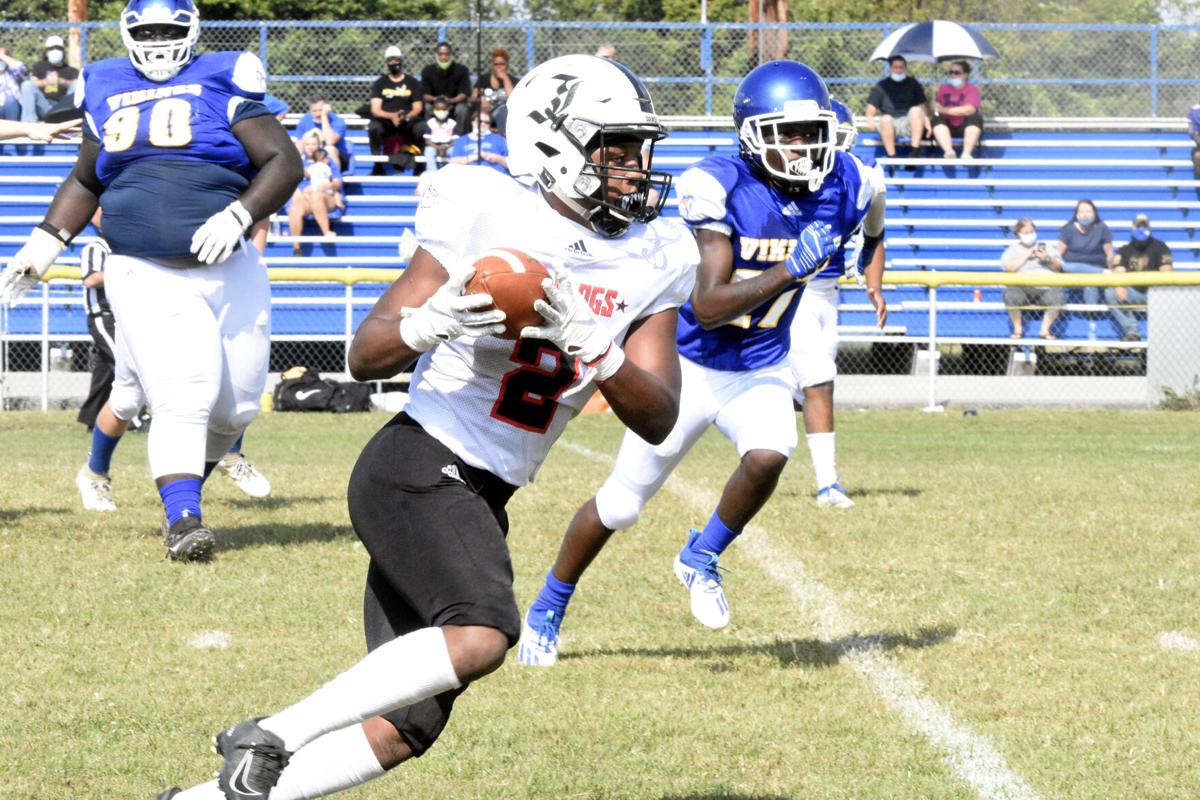 LOUISVILLE — It was a 180-degree difference for John Hardin football’s offense Sunday afternoon at Valley. After getting shut out against North Hardin last week, the Bulldogs brought in nine touchdowns in Week 3, four of which came from Isaiah Harris. Three of Harris’s touchdowns came on the run with the fourth being a 55-yard pass reception.

“We played as a team and we just executed when we needed to,” Harris said. “I just had to do what I had to do to get the win today.”

Harris and his teammates’ efforts paid off with a 64-7 road victory over the Vikings. This was John Hardin’s first win of the season in addition to its first district game on the schedule. It was also new Bulldogs head coach Doug Preston’s first win since taking over the program.

“Obviously a win is a good win. Any win’s a good win, but it’s a district game and that’s really important. Our kids got to have some fun,” Preston said. We’ve had two really tough football games and come up short, so I’m really happy for them that they had a lot of fun and success today. We got to play everybody on the team so that’s a great day for me.”

Seven of John Hardin’s touchdowns came through the team’s rushing game, which racked up 217 yards total on the day.

The other two touchdowns came as passes courtesy of quarterback Kadon Wilson. These were also Wilson’s first touchdowns of the season. The quarterback attributed the offense’s success Sunday to hard work in the days leading up to the game.

“I’m proud of them. We came a long way. The two losses were hard, but we’ve been practicing our butts off,” Wilson said. “Especially on the offense’s side, we had a lot of mess-ups. We got it fixed during the week. The line’s playing perfectly, backfield, it’s just all about execution.”

The Bulldogs got on the board on their opening drive. Set up on the Valley 9-yard line following a fumble recovery, Harris punched into the end zone from three yards out on 3rd & 3. The extra point made it a 7-0 John Hardin lead with 8:28 still on the clock in the first quarter.

Harris did it again on John Hardin’s second drive. With 3:35 left in the first quarter, Harris ran 10 yards for another touchdown. Nicholas Surley Jr. proceeded to run it back in for a 2-point conversion to put the Bulldogs up 15-0.

John Hardin found one more touchdown before the first quarter ended when Wilson executed a pass to Surley Jr. for 40 yards, with the PAT making it 22-0 with 11 seconds left on the clock.

The Bulldogs offense showed no signs of slowing down in the second quarter, with their first play resulting in a 37-yard carry to the end zone from Kelvion Wilson. A blocked kick made it 28-0 with just over nine minutes until halftime.

The Vikings responded with a 45-yard touchdown run from Tyler Hatcher, but John Hardin answered right back when Dominik Hodges scored on a 23-yard carry.

One touchdown each from Harris and Surley Jr. before the end of the second quarter brought the game to a 50-7 Bulldog lead at halftime. After Surley Jr.’s touchdown with 2:29 left in the first half, a running clock was activated for the game’s remainder.

John Hardin had two more touchdowns before the game’s close. One came in the third quarter when Wilson connected with Harris for 55 yards. The second was a seven-yard rushing touchdown by Kevin McCroskey with 10:30 left in the game.

“Kids did a great job, the coaches have done a great job getting ready and I’ve been telling the kids all along we’re a pretty good football team,” Preston said. “We’ve just gotta keep working and having faith. One day and one game at a time.”