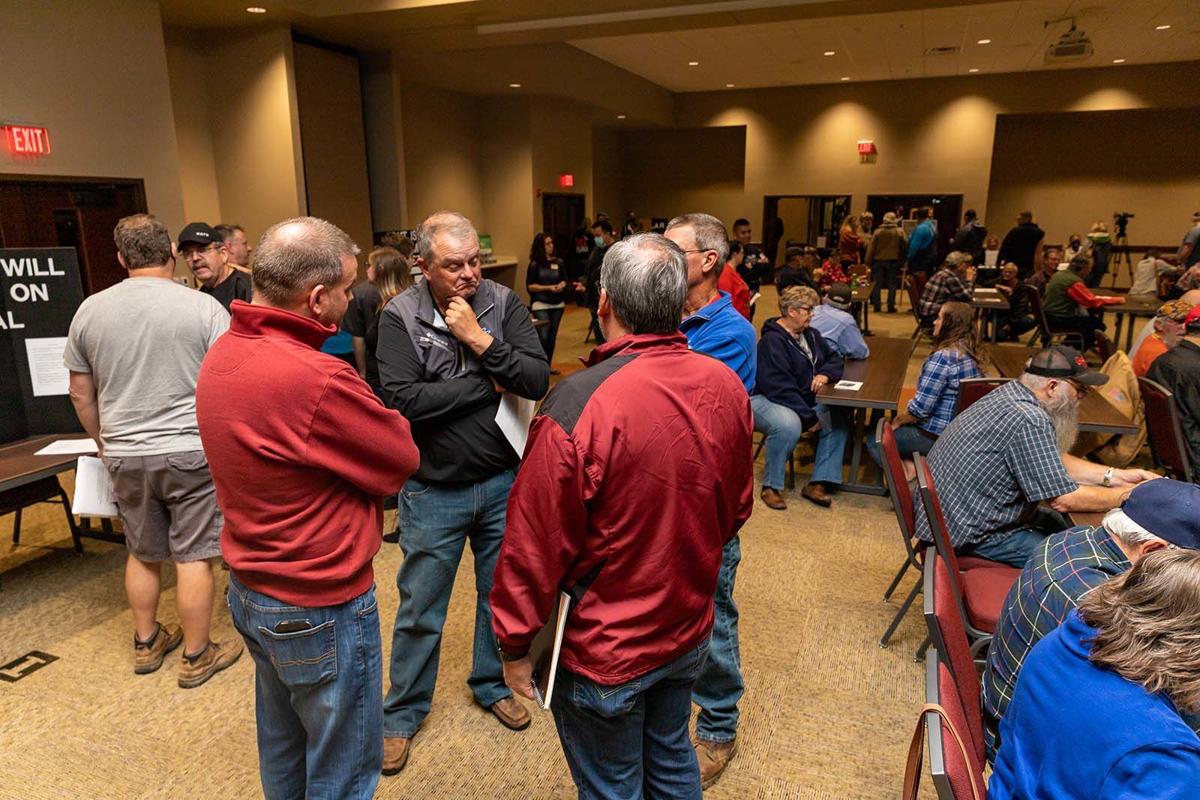 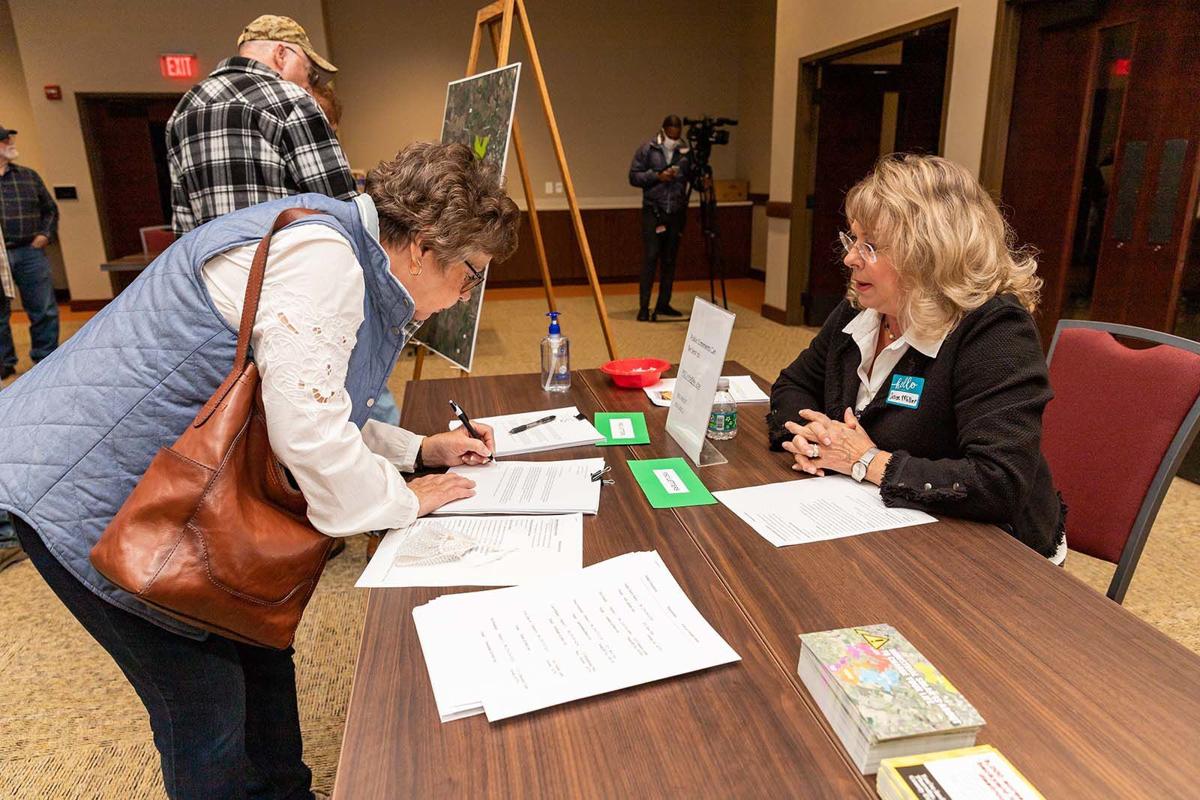 During an information meeting Thursday hosted by Hardin County Citizens for Responsible Solar, Kathy Williams of Cecilia signs a letter Thursday to be sent to the Public Service Commission. 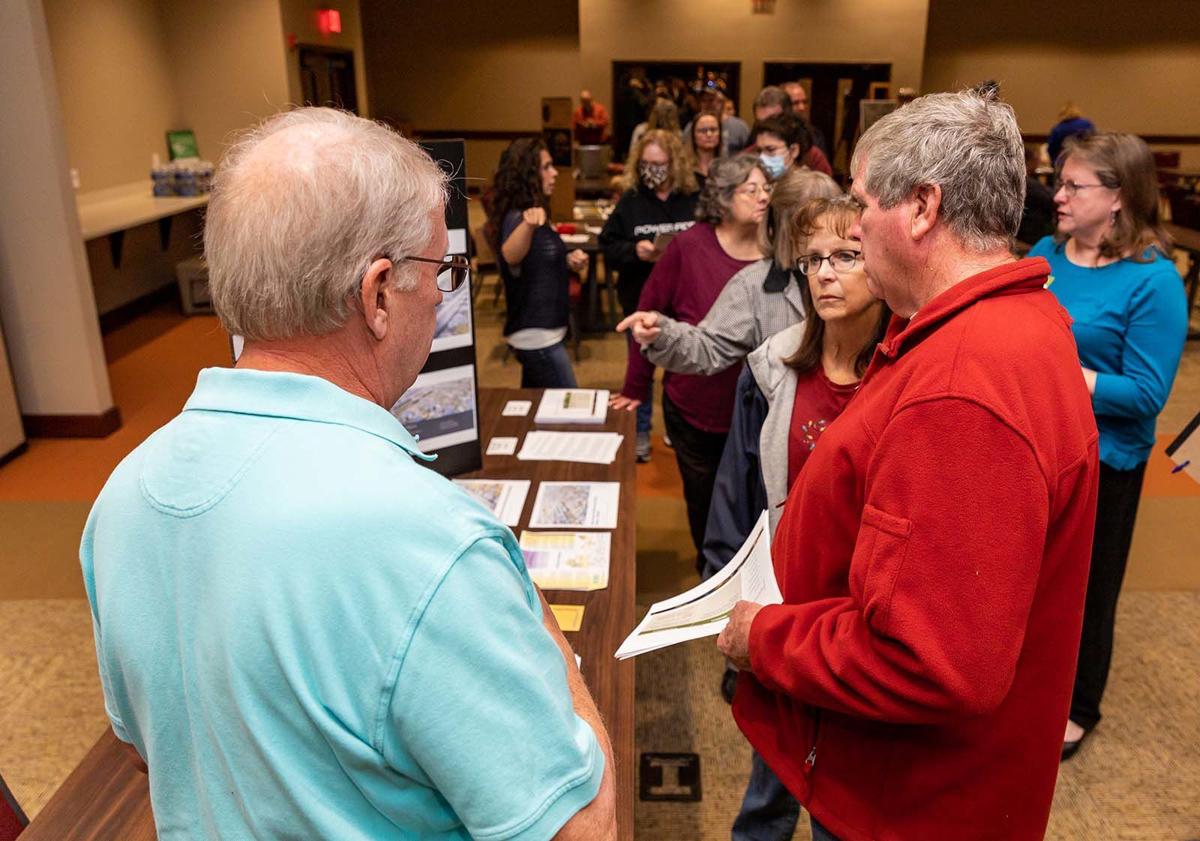 Dan Feeser, left, a member of Hardin County Citizens for Responsible Solar, speaks Thursday to James and Debbie Snellen of Hodgenville. The Snellens came to the community information meeting at Hardin County Extension Service in Elizabethtown because they farm land in Hardin County. 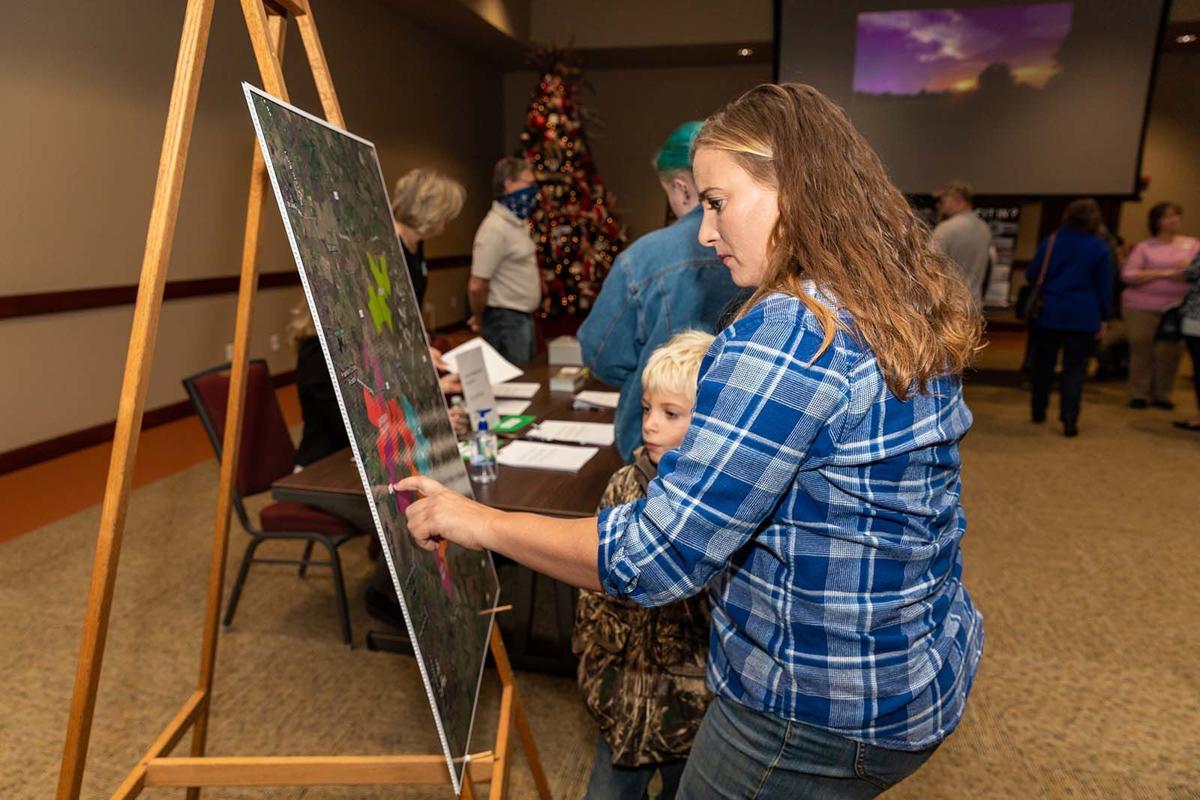 Jennifer Wilmoth of Cecilia points to a map Thursday showing her son, Andrew Floyd, 7, where their house is in relation to proposed solar farms in the area.

During an information meeting Thursday hosted by Hardin County Citizens for Responsible Solar, Kathy Williams of Cecilia signs a letter Thursday to be sent to the Public Service Commission.

Dan Feeser, left, a member of Hardin County Citizens for Responsible Solar, speaks Thursday to James and Debbie Snellen of Hodgenville. The Snellens came to the community information meeting at Hardin County Extension Service in Elizabethtown because they farm land in Hardin County.

Jennifer Wilmoth of Cecilia points to a map Thursday showing her son, Andrew Floyd, 7, where their house is in relation to proposed solar farms in the area.

As the sun set Thursday night in Hardin County, several members of the community came to oppose proposed fields of panels using that same sun to collect energy.

About 200 people for mostly southern Hardin County filed through an open-house style session at Hardin County Extension Service to collect information from Hardin County Citizens for Responsible Solar, a group opposed to proposed industrial energy projects near Cecilia and Stephensburg.

“The turnout was huge,” said Connie Goff, part of the leadership of the group. “I was a little concerned about whether or not we have a lot of support in trying to make the right decision to keep solar out of this county. I know the support is there now.”

Goff, who one of three Republicans filed to run for District 7 magistrate next year, said she was encouraged by the large turnout.

“People came wanting information,” she said. “People came angry because they don’t want this in Hardin County and they came out in big numbers.”

Goff said many people came with their minds already made up, even though there are some benefits to the solar projects.

“I didn’t talk to a single person who was for solar,” she said. “I had some facts about what the tax benefits are for Hardin County, because there are some benefits. I wanted to present that to them. They already had opinions formed. I didn’t have to convince anyone.”

As a Realtor for Lewis Auction Co., Gordon Hash of Elizabethtown said he has sold property in the area and came to support his former clients and friends from Cecilia Baptist Church, where he worships.

“So many of the members there are being affected by this project, so we’ve come out to support them,” he said, adding that it will affect property values.

Hash said the lack of tax revenue the county will receive from the project was most concerning.

“That shocked me as much as anything about how much taxes were really going to come into the county as a result of this,” he said. “It doesn’t seem to be that much.”

Sandra Roberts of Stephensburg said she saw “a lot of different points” she disagrees with and “hopes we never have (industrial solar) in Hardin County.”

As a farmer for 35 years, Paula Sumpter of Sonora questioned the environmental impact of the projects.

“We have endangered species here,” she said. “We have the sandhill cranes that nest here and bald eagles here.”

Sumpter also was concerned about loss of farmland, as many of the proposed sites currently are used for crops.

“We don’t need to lose any farmland,” she said. “When you take the panels and you put it on that much land, you’re talking about a deluge and flood plains and water going everywhere.”

Aubrey Sumpter of Sonora said a solution would be to avoid use of Hardin County’s valuable farmland and find other options for placing the panels.

Raised in Glendale and now residing in Elizabethtown, Garrett Swift said the panels are not as green as companies say they are.

Swift also is a proponent for protecting farmland, he said.

“We only have so much land here in Hardin County,” he said, adding he’s lived in the community his entire life. “I don’t think anything else needs to be dedicated to that. If we’re going to be growing food on it, we’re going to make grain and feed our cattle, make bourbon, do what we do here in Kentucky, solar panels shouldn’t be on that land.”

A candidate for Hardin County judge-executive, Daniel London walked about the room speaking to attendees.

“I don’t have a corner on knowledge,” the current deputy judge-executive said. “I came here tonight to learn something and to listen.”

London said he and other county officials have tried to keep an open line of communication with all sides, including leadership of the opposition group.

“What we’ve tried to do is be very open-minded and facilitate communication,” he said. “I have committed as long as this remains a professional process to keeping those lines of communication open.”

Three proposed solar projects are undergoing the government scrutiny process in order to be granted zoning changes, conditional use permits or both from Hardin County government.

Hardin County Citizens for Responsible Solar have identified two other projects, Hansborough Valley Solar and Telesto, who have started the process of leasing land in the county.

All of the projects are proposed on land in and around Cecilia and Stephensburg.

“I would point out the first project was denied by the planning and zoning commission,” London said.

The first project, Rhudes Creek Solar, was approved for a zoning change but denied a conditional use permit. After a lawsuit challenging the decision, a Hardin Circuit Court ruling returned the case to county government.

A zoning change hearing is scheduled for 5 p.m. Tuesday on the second floor of Hardin County Government Building, 150 N. Provident Way in Elizabethtown before the planning commission and a conditional use permit is scheduled for Jan. 6 before the county’s board of adjustments for the iBV project.

“My intent in coming tonight since day one in meeting with the landowners and the neighbors of the project was to tell them that I want to engage with them and hear what they’re concerns are,” he said. “And let’s sit down and talk about them and see if we can work out a solution or at least give you good information and good data.”

Saiz said he has met with leaders of Responsible Solar group to work through and address concerns.

“Tonight me coming was still in that same vein,” he said. “I still want to know what those concerns are and give you good factual and good data that you could make a decision that you want to support the project or be in opposition to the project but I want you to have good facts and good data.”

Saiz said he would like to engage with community more to give them correct data to what’s involved in his company’s project.

“Some people have heard different stories that’s not completely accurate,” he said. “I’m not here tonight to correct that. I’m here to listen and understand what that is.”